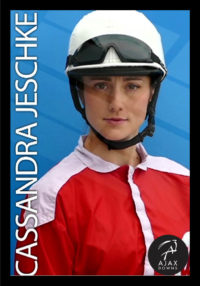 The horse that changed my life

As with most horse lovers who have made a career for themselves with the noble equine, Cassandra Jeschke has had a number of dear friends who have helped her along the way. Jeschke, who in just two years has become one of Ajax Downs’ top Quarter Horse jockeys, will never forget one important day and one important horse.
“Shake Pretty Baby was my first winner ever,” said Jeschke, an accomplished equestrian who has been riding since she was six-years-old. “She gave me my first win earlier than some people thought I would get.”

Jeschke’s horsemanship skills were not in question but the small Ajax jockey colony is not easy to break into as new rider.

But at the age of 22, Jeschke rode Shake Pretty Baby to a one-length victory in an allowance race on September 10, 2013 for owner Dean Link and trainer Chantelle Bourgeois. The pair were 7 to 1 outsiders in the five-horse field, the longest shot on the board, but once the gates flew open, there was no stopping them.

Shake Pretty Baby is an Ontario-bred chestnut mare bred by Heste Sport and by the stallion Pretty Boy Perry.

Horse and rider were still in action together in 2015 as they won a speed index race in June.

“Her and I just get along,” said Jeschke, who is from Cobourg, ON. “She has always been one of my favourites.”

Jeschke made local news in 2008 with another one of her favourite horses, Delilah. It was that mare who took Jeschke to a first-place prize in Junior Training at the Ontario Horse Trials Association Provincial Championships in 2008.

“Riding, in general, changed my life,” said Jeschke. “But there have been a very special horses along the way.”