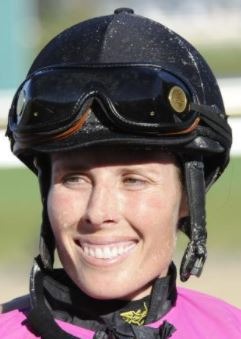 Both of Homeister’s parents were jockeys, and as a result, she grew up riding horses. Her mother is now a horse trainer at the Calder Race Course, where Rosemary won her first race as an apprentice jockey. In 1991, she briefly attended Broward Community College but left to develop a career in racing.

Homeister started her career working with horses as an exercise rider and breaking yearlings before beginning her riding apprenticeship in 1992. She was successful that year, becoming the first woman to win the Eclipse Award for Outstanding Apprentice Jockey in the United States. She was originally the runner-up, but winner Jesus Armando Bracho from Venezuela was suspended, then surrendered his award for falsifying his racing papers. Two years later, she went to the awards ceremony to accept the award. Since then, Homeister has won more than 2000 races at tracks in Texas, New Mexico, Oklahoma and along the East Coast of the United States from Florida to New York. In 1995, she and her mother were profiled by CBS News Sunday Morning.

In 2000 and 2001, she was the United States leading female jockey in wins. In 2001, she was the first (and so far only) female jockey to win the Clasico del Caribe conducting the Panamanian filly Alexia. In 2003, she became only the fifth woman to ride in the Kentucky Derby, finishing 13th aboard Supah Blitz in a race won by Funny Cide.

Homeister retired in November 2004 after thirteen years of competition, having won 1,726 races from 12,907 starts. However, she returned to racing in June 2006 and on September 3 of that year was inducted into the Calder Race Course Hall of Fame.

As of December 2006, she is divorced from jockey José Ferrer, according to an interview she gave TVG Network‘s Lady Luck.[2]

On February 11, 2011, she announced that she was pregnant and would not ride for an indefinite period, and then returned to race riding in 2012. She rode the filly Include Betty in the 2015 Kentucky Oaks.[4]

Rosemary Homeister has won 102 Stakes races, four being Grade 2s. She has had been many firsts in the racing world. Winning the 1992 Eclipse Award as an outstanding apprentice jockey and the first and only woman to be invited, ride in and win the Clasico Del Caribe on a filly, named Alexia, against all-male riders and horses.

After retiring from horse racing Rosemary took her passion in the Health and Wellness industry by becoming a Certified Personal Trainer and Fitness Nutrition Specialist. She went on to compete in Bikini Fitness winning her first show and then competing internationally to finish second among top competitors.