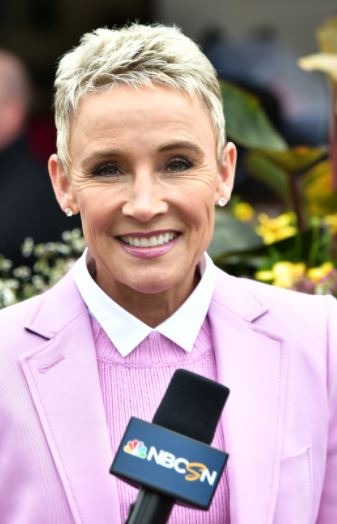 Donna Barton Brothers: Excellence on Horseback and on Camera

Donna Barton Brothers was a successful jockey before transitioning to a mounted reporter for horse racing. (Eclipse Sportswire)

Donna Barton Brothers did not set out to follow the path blazed by her mother, Patti, by becoming a jockey. And yet she rode from 1987-98 and ranked as the second-leading money earner of all time among women when she retired.

Barton Brothers did not set out to be an on-horseback reporter who covers major races for NBC Sports. And yet she has admirably filled that role since 2000, conducting insightful interviews that are widely applauded.

None of this happened by chance, of course. Whatever she undertakes, she prepares for success.

“She does her homework like no other. She has everything from A to Z,” said NBC’s Tom Hammond. “She’s so organized. That’s just her nature. She leaves nothing to chance.”

As a young woman, though, the native of Alamogordo, N.M., was very much in search of a career. Her sister, Leah, and brother, Jerry, followed their mother’s lead. In 1969, Patti was one of the first women in the United States to obtain a jockey’s license.

Barton Brothers share a laugh with Victor Espinoza after he won the Breeders’ Cup Classic aboard American Pharoah. (Eclipse Sportswire)

“I grew up in it,” she said, “so for me, being a jockey seemed like a fairly mundane profession.”

She spent four and a half years living an itinerant life as an exercise rider after graduating from high school only to realize that she wanted more.

“It hit me that I’m 21, I didn’t go to college, and I can’t keep gallivanting around the United States as an exercise rider,” she said. “Although it was fun, it’s not a great way to create a pension plan.”

Pete Antonucci, an agent, had been encouraging her to consider a career as a jockey. She was filled with doubt, but she agreed to accept a mount in Birmingham, Ala. Her brother, Jerry, was there to watch her break from the starting gate aboard Bold Splinter.

The thrill of the race was life-changing despite a fifth-place finish; she could not wait to tell Jerry all about it.

“I walked up to him after the race and said, ‘Oh my God, not only is that the most exciting thing I’ve ever done, it’s the most challenging,’ ” Barton Brothers said. “I had a brand new respect for everybody I thought was in a mundane profession.”

A career was launched. The combination of her knowledge of horses and her mother’s spunk helped her to win 1,171 races. She counted a second-place finish astride Hennessy in the Breeders’ Cup Juvenile in 1995 among her highlights.

Patti was known for turning to fisticuffs whenever anyone from male-dominated riding colonies attempted to intimidate her. Her daughter found other ways to assert herself.

When a fellow rider repeatedly attempted to unnerve her by passing in unnecessarily close quarters, she informed him: “Every time I pass you, I’m cutting it close. You better have your head up because I’m shaving you off.”

Over time, Barton Brothers became increasingly aware of the perils of her job while her love for then-trainer Frank Brothers, now her husband, deepened. It became difficult for the two of them to be apart. She retired in 1998 and joined him at Fair Grounds, where an opportunity to conduct post-race interviews on weekends became available.

She quickly realized that, while she was accustomed to being interviewed, her new role presented a very different challenge.

“It immediately hit me that, like being a jockey, this was a lot harder than it looked,” she said, “because I never had to ask the questions before.”

She adapted to reporting as quickly as she had to be a jockey and found herself in demand by other outlets. She was reporting from the paddock at Churchill Downs in 2000 when NBC, having just acquired the rights to broadcast the Triple Crown races, arrived there to prepare for future telecasts.

Hammond said NBC was searching for a female analyst and he recommended Barton Brothers, who was hired.

“I took her under my wing from that point on,” Hammond said, “because she didn’t have a lot of announcing experience and she had, as Donna always does, a million questions.”

That, of course, is part of her preparedness. She soon began to thrive in the unusual role of being an on-horseback reporter, interviewing jockeys and capturing the emotion of the moment immediately after they won major races.

“She was a natural,” Hammond said. “And I can’t say enough about how difficult it is for her to perform her job on horseback. It’s an amazing job.”

Her handiwork is widely applauded. In 2014, Sports Illustrated cited her as the year’s best sideline reporter. “Always smart and prepared with her questions, she’s a huge part of a consistently excellent NBC production,” Richard Deitsch wrote.

“It’s a wonderful way to be involved with the sport you love and at the highest level because I get to cover all the best races,” she said. “I love everything about it.”

Most would say that Barton Brothers followed one dream job with another.