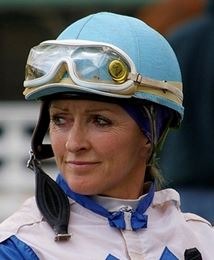 She is sometimes referred to by the nickname “The Queen of Fort Erie”[1] because of a long affiliation with the border oval. With 1,001 victories and 3,065 combined wins, places and shows, she retired “for good” in April 2012[2] as the winningest female Canadian jockey of all time and was the first Canadian woman to achieve the 1,000 wins milestone.[3]

The only child of Ron and Eleanor (née Broderick) Villeneuve, Francine grew up around horses on the family farm in Winchester Springs, Ontario and went to North Dundas District High School in the village of Chesterville. While attending Humber College for equine studies, she took a summer job at Woodbine Racetrack as a hot walker in 1984, and by 1987 she was a licensed racing jockey.

Within four years, in June 1991, Villeneuve crossed the finish line second in the Queen’s Plate, riding Wilderness Song, making history as the first female ever to place in Canada’s oldest and most prestigious race. At the same time she was also the first Canadian woman to even ride in the event, making it doubly special. By that August she became the first (of only four women) to compete in all of the Canadian Triple Crown races; the Queen’s Plate, the Prince of Wales Stakes and the Breeders’ Stakes respectively, a feat that would not be duplicated by another woman for 16 more years. On November 2, 1991 Villeneuve became the first woman to ride in the Breeders’ Cup Distaff, and was only the second in any Breeders’ Cup race, as American Julie Krone had previously ridden at the Breeders’ Cup in both 1988 and 1989.[4]

Over the next decade and a half, the victories and the “first female to…” milestones began to accumulate rapidly. In May 2002 with her 600th victory, she overtook fellow pioneer Regina Sealock as the winningest female jockey[5] in Canadian history (a crown she would wear for over ten years before being passed herself). Her career saw many successes culminating in 2004, when she became the first female winner of the prestigious Avelino Gomez Memorial Award. A year later she became the first woman to finish “in the money” at the 2005 Prince of Wales Stakes,[6] barely missing the victory by a nose to finish second aboard a 16:1 outsider named Autumn Snow.

With over 25 years “in the irons” she rode more than 8,100[7] mounts and was also the first Canadian woman to reach the milestones of 1,000 seconds, 1,000 thirds, and the first to show a combined 3,000 times. All of this was achieved despite losing time in the saddle because of several serious injuries and taking two personal hiatuses from the sport; the first, a one-year break during her peak years to give birth to her son Aaron, and the second, a three-year sabbatical to better tend to her family.[3] Her pioneering spirit and unassuming nature made her a fan favorite that would forever kick in the door of the historically male-dominated sport and help to clear a path for other great Canadian women like Chantal Sutherland and Emma-Jayne Wilson. It was Wilson that would eventually overtake her record for most career victories in mid-September 2012.[8] Sutherland would not pass her until 2017.[9]

On October 31, 2011 in one of her final races, she rode Red Hot Doll to victory in the $30,000 Fan’s Cup at Fort Erie Race Track for career win number 1,000.[10] She retired as the all-time leading Canadian woman in wins, places and shows and was second only to Sealock in all-time starts. In June 2012 she was inducted into the Fort Erie Sports Wall of Fame.[11] Villeneuve owns a horse farm in central Florida, where for a time she trained, bred and showed rare Akhal-Tekes.[1] Because of her connection to the breed, she was extended the rare honor of being invited to race at the International Akhal-Teke Association meeting held in Ashgabat, Turkmenistan in late April 2012. She was the only female jockey in the field. Villeneuve has also been a longtime supporter of the Juvenile Diabetes Research Foundation. It was announced in August 2012 that Villeneuve would also be a recipient of the Queen Elizabeth II Diamond Jubilee Medal at a ceremony held in November.[12][13]

After galloping horses for Nick Zito at Saratoga in the summer of 2012 and then for others at Tampa Bay Downs during the following winter season, Villeneuve received her trainer’s license and like many Canadian trainers splits her year between the Florida and Canada Thoroughbred racing seasons.[14] In 2016, she and fellow jock-turned trainer, Amanda Roxborough, co-founded the Sport of Queens Racing Club. As a racing syndicate, SOQ allows everyday people to experience the thrill of thoroughbred horse ownership for as little as $200 a share, plus fees.[15]

In the winner’s circle one more time

Last season at the track, Francine Villeneuve made her way into the Fort Erie winner’s circle aboard Red Hot Doll. It was a moment to celebrate as the veteran rider had finally reached her goal of 1,000 career wins, becoming the winningest female Canadian jockey of all time and the first female rider to reach 1,000 wins in Canada.

Although Fort Erie Race Track had credited Francine with the milestone, the North American database for horse racing known as Equibase did not. In July of 2011, Villeneuve had won a race in Kingston, Jamaica aboard a horse named Turbine but that particular win was not noted because it took place outside of North America.

On Sunday, April 15, 2012 Villeneuve was back in the winner’s circle aboard a filly named Will to Shine at Calder Racecourse in Florida.

“I received a call from her trainer Michael Lightner several weeks prior,” explained the rider. “He asked me to come and work the filly and if I liked her she was mine to ride.”

Mike and his training partner Mary Surrency played a major role in the historic win.

“They said they wanted me to win my 1000th race on their horse,” said Villeneuve.

Villeneuve dusted off her riding boots and saddled up for what would be a gate to wire victory pulling away to win by five lengths.

“It was the greatest feeling.”

Equibase will now credit the popular rider with her 1,000th win, a total relief, she said.

When asked if she would reconsider her retirement Villeneuve said she wouldn’t bet on it.

Top stories delivered to your inbox.

“I made a decision and I am going to stick to it.”

But racing fans don’t need to feel as though they may never see her again as Villeneuve is coming home to Fort Erie to be inducted into the local Sports Wall of Fame. As a special treat, Villeneuve will be on track on Father’s Day at Fort Erie Race Track to sign autographs for fans and say her official good bye to the sport she loves so much and to the track which she called home.

Villeneuve began her career on the racetrack in 1984 when she took a summer job as a hot walker at Woodbine in Toronto. Her ability around horses and her small stature made her a natural for a future in the saddle. Her long career has seen its share of memorable occasions including riding Wilderness Song to a second place finish in the 1991 Queen’s Plate and competing in the Breeders’ Cup Distaff, finishing second in the Prince of Wales on Autumn Snow in 2005 and winning the Avelino Gomez Memorial Award for contributions to racing.

Villeneuve became known as a trail blazer for women in the sport helping to pave the way for others. She earned the nickname “The Queen of Fort Erie” after her years of dedication and hard work at the historic Border Oval.

Fans are invited to meet Villeneuve and give her their best wishes on Father’s Day, June 17 at Fort Erie Race Track for an autograph and meet and greet.