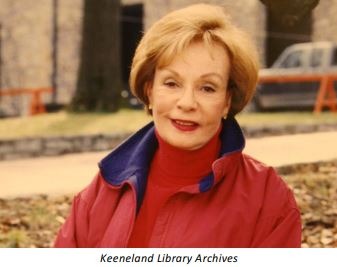 Life as long and rich as that of Alice Headley Chandler, which drew to a peaceful close on Tuesday, Apr. 6, at her home in Lexington, Kentucky, at the age of 95, is measured by four
generations–from her surviving contemporaries to her great-grandchildren–for whom cheerful scarves of pride will surely brighten the black raiment of mourning.

And that’s not just because of the consolations available in remembrance of a wonderful character or celebration of her wonderful achievements. For this iconic Kentucky horsewoman was always animated by a daily contribution, decade after decade, to a collective endeavor that transcends even lives as impressive in scope and achievement as the one that began in
her hometown of Lexington on Jan. 16, 1926.

And if the Headley the clan has resonated in the breeding of Thoroughbreds for nearly two centuries, few horsemen of any name or background will ever match the personal legacy she created within her allotted stewardship. As long as the breed continues, Alice Headley Chandler will be honored: explicitly, among those curious to chart its long history; and vicariously, among the many more who will always recognize Sir Ivor as a transformative name in its genetic evolution. The two opposing themes that were uniquely combined in Chandler–cherished simultaneously as a link in a venerable family chain and as a pioneer for the whole industry–were aptly condensed by this horse.

On the one hand, he represented personal legacy: Chandler famously bred Sir Ivor from her father’s mare bequeathed. At the same time, he became an immediate symbol for what a woman could achieve, given the opportunity, in a conservative and patriarchal walk of life. Born as a pathfinder towards modernity, he became the first American-bred Epsom Derby winner bought at public
auction. In the process, he launched the era of international commerce that has sustained the bloodstock industry ever since–a revolution in which Chandler and her family would
continue to share, notably when selling a $9.7 million Storm Cat colt, later Group 2 winner Jalil, at Keeneland in 2005. Yet both Sir Ivor and his breeder were also a credit to continuity, to bloodlines and inherited lore that had been patiently cultivated to stand the test of time.

Chandler bred him from Attica, a daughter of Mahmoud’slargely forgotten son, Mr. Trouble. The stallion had himself been sold in 1962 as part of the dispersal of stock owned by her father Hal Price Headley, a key figure in Keeneland’s foundation and served as its first president from 1936 to 1951. Attica was one of just four mares he had left her, along with a parcel of 268 acres down the road from Keeneland. This, remember, out of a Beaumont Farm estate that had extended past 4,000 acres by the time of his death. Yet this would become the nucleus of an international brand and a recognized symbol for integrity, heritage and excellence: Mill Ridge Farm. In 1964, Chandler sent Attica to Sir Gaylord at Claiborne, where Bull Hancock proved a valuable source of sage counsel and some early business, sending a few overflow mares to Mill Ridge. Chandler, to that extent, was certainly comfortable with the Bluegrass Establishment. Arguably, her success duly made more substantial inroads on its misogynists than could more flagrant feminist campaigns of the 1960s. Because anyone, however, set in their ways, could see that this woman owed her success to a tireless work ethic, elite standards of horsemanship, and a rare sensitivity to the rhythms of Nature.

Like the Hancocks, Chandler’s father had played an important role in sowing the American breed with European Classic blood. In 1929, he had imported Pharamond II (GB) as a conduit for the core bloodlines of the breed-shaping stud assembled by the 17th Earl of Derby. At the time Pharamond began his Kentucky career, the star of Headley’sstable was the champion filly Alcibiades. In 1934, he paired the two to produce Menow, the champion juvenile who later became Tom Fool’s sire (and so grandsire of Buckpasser). Two years later, Alcibiades was sent to War Admiral and produced Salaminia, a high-class stayer. When she mated with Pharamond, Salaminia produced Athenia, the dam of Attica. In a way, then, the reverse passage of Sir Ivor was just another phase in the constant, mutual regeneration between the transAtlantic gene pools. As it happens, it was Bull Hancock who purchased Attica’s Sir Gaylord yearling on behalf of Raymond Guest, American Ambassador to Ireland, for $42,000 at the Keeneland July Sale of 1966. AHe was a May 5 foal, a tall horse, just a little bit slab-sided, Chandler remembered later.

The colt still had some growing to do but was sent to Vincent O’Brien in Ireland. And that was how O’Brien and his son-in-law John Magnier discovered in Sir Ivor a template for the commercial transfer of the speed-carrying dirt genes to the demands of Classic racing on turf. Shortly after Sir Ivor won the Derby, O’Brien returned to America and bought a Northern Dancer colt for $84,000. (His dam, incidentally, was out of a Menow mare.) Two years later, like Nijinsky, he became the last winner of the English Triple Crown. Besides his role as a pathfinder, Sir Ivor would also have a great genetic influence–notably as a broodmare sire, just like his sire and also his sire’s half-brother Secretariat. Daughters of Sir Ivor, for instance, produced Green Desert and El Prado (Ire) to become breed-shaping sires. Happily, Chandler made the journey to Epsom, along with her mother Genevieve Molloy and her son Mike–who ended up dangling from a beam in Guest’s box to see over everyone’s heads. After the race, no doubt, they must have remembered how Chandler’s father had been forced to quit Princeton as a sophomore in 1908 when news came that his own father, Hal Pettit Headley, had suffered a stroke. Someone was needed to take over the farm, and he had shown a flair for horses even as a 14-year-old when taking 1897 Kentucky Derby runner-up Ornament and 16 other Thoroughbreds to the World’s Fair in St. Louis. He came back with a blue ribbon and $4,600 in prizes. His, in turn, would eventually be an abrupt and premature departure, following a heart attack.

But in the meantime, he left an indelible stamp on his daughter, who inherited his reverence for the land and the nuances of all husbandry. He raised cattle and tobacco and horses and did so with the respect that has filtered through to his grandson and great-grandson, so pivotal to the development of Horse Country tours. Chandler’s father allowed her to embrace life on the farm to the fullest. On one occasion, she was found asleep with a pony when still a toddler. AHe never said ‘don’t do it, ’cause you might get hurt,’ Chandler remembered once. If that meant shooting craps with the grooms on the tack room floor, that was fine–though she had to renounce her winnings when she came home at lunch and announced that she had just won $600 and an automobile from the jockey Smokey Saunders. AI went with Daddy as much as possible because I loved doing all the things he loved to do,@ Chandler recalled. AHerding cattle, and breaking yearlings, all that kind of stuff, checking the tobacco.@ The staff connived with her sense of adventure, too. They let me do anything I wanted; I tried it all,@ she said. We used to sneak onto yearlings before they got broken. She missed all that when sent away to a convent school in Cincinnati and later to schools in Virginia and Connecticut. But for the same reason, she loved summers back on the farm; and hunting in winter, and, when Keeneland opened, she would go down there with Daddy at 4 a.m.

Chandler did have some time away from Lexington, raising four children–a daughter Patricia (ATish@), plus three boys who all found careers in the Thoroughbred industry, in Mike, Headley
and Reynolds, Jr.–from her first marriages. (One evidently a rather callow wartime engagement; another to Reynolds Bell, himself from a family of horsemen, but for a time than working
in oil down in Texas.) But she had returned in 1959, and poor Mike was holding a shank when her father collapsed in front of him after breezing horses at Keeneland in 1962. He was 73.
ABut, boy!@ Chandler would say. A lot of miles! He didn’t walk; he ran. Her marriage in 1970 to the South African-born veterinarian, Dr. John Chandler, would open up new horizons for Mill Ridge. Having arrived via Newmarket and himself central to Prince Khalid Abdullah’s Juddmonte empire, he had an important role in developing an overseas client base. In
time, Mill Ridge imported Diesis(GB) from Europe to become another important transatlantic influence (three daughters won the Epsom Oaks) alongside a significant indigenous stallion in
Gone West. Emulating her father, Chandler became a respected industry leader. She served on the Keeneland Board for 23 years and was also a director of the Breeders’ Cup and the Thoroughbred Owners and Breeders’ Association. She chaired the University of Kentucky Equine Research Foundation, was president of the Kentucky Thoroughbred Association and served stints with the Equine Drug Council and Gluck Research Center. In 2006, Chandler was recognized by the Kentucky State Senate for her lifelong dedication to the community and the equine industry; and three years later received the Eclipse Award of Merit.

Chandler was inducted to the Hall of Fame at the National Museum of Racing only last year as a Pillar of the Turf alongside her father, who had preceded her by a couple of years. By then, this distinction had become a little poignant, as Chandler had lately had dementia, though tended devotedly by her caregivers and a large and loving family circle. In the event, of course, the ceremony was postponed anyway because of the pandemic. But her delayed induction will now become a chance to honour one treasured by the whole Bluegrass community, during her long and illustrious prime, as one of the most vivid and accomplished horsewomen in the story of the Thoroughbred. Breeders will be indebted to her for as long as they continue to puzzle over pedigrees. Remember that Attica’s son was not just a mighty broodmare sire himself, but that his daughters appear to have passed a similar potency to their sons. Also and Shareef Dancer, for instance, has respectively given us the dams of Deep Impact and Dubai Millennium. But Alice could still be prouder of her very own genetic bequest. Her son Headley took over Mill Ridge’s running in 2008, and grandson Price was last year named general manager.

Adhering scrupulously to her one, non-negotiable axiom–A take care of the horse, and the horse will take care of you; they have maintained the farm as a thriving presence in the modern industry: it has raised 36 Grade I winners since 2000, including Horses of the Year Point Given (Thunder Gulch) and Havre De Grace (Saint Liam). Headley and Price named their Nicoma Bloodstock for one of the first mares Alice purchased, while they have recently revived the farm’s stallion story by launching. Oscar Performance (Kitten’s Joy). As a top-class turf miler, he has every right to write a new chapter in the farm’s international story. Fittingly, he extends the El Prado line–and so Sir Ivor’s legacy as a broodmare sire. When she handed over the Mill Ridge reins in 2008, Chandler declared: I have lived a blessed life, doing just what I want to do: associate with the finest horses, clients, friends and an industry that I love. Thanks to her, however, countless others have shared that same sense of benediction. No doubt these will now pay tributes of due eloquence.

But it is comforting to recall that many such were offered when Alice could still be touched by them herself, as the honoured guest of the Thoroughbred Club of America in 2005. Tellingly, she was only the third female to receive this distinction, at its 74th testimonial dinner, following Mrs. Payne Whitney in 1939 and Isabel Dodge Sloan in 1951. Earlier that year, John Shirreffs had