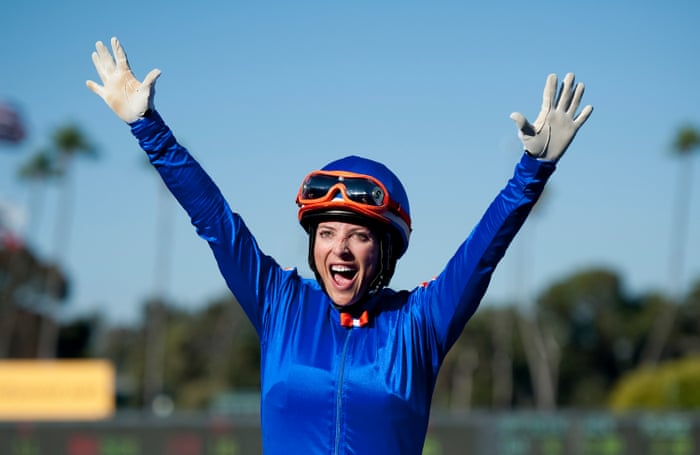 Chantal Sutherland: Looking At A Bright Future After “Dark Times”

Named one of People Magazine’s “100 Most Beautiful People” in 2008, Chantal Sutherland was poised to become racing’s “It Girl.” She subsequently appeared in a four-page spread in Vogue Magazine, along with a feature in Sports Illustrated.

She was a regular on the TV series “Jockeys” on Animal Planet and “Luck” on HBO; was the face of a Canadian company’s beauty products line; modelled Esquire watches in TV ads and was the poster girl for Del Mar in the track’s massive marketing campaign.

On the southern California jockey circuit, the two-time Sovereign Award winner was in demand as well.

She became the first woman to ride in the Dubai World Cup (G1) when she partnered with Game on Dude in 2012 for Hall of Fame trainer Bob Baffert. Game on Dude also won the Santa Anita Handicap (G1), the Hollywood Gold Cup (G1) and three Grade 2 races in his 2011 and 2012 campaigns with Sutherland aboard.

But after Game on Dude lost the 2012 Pacific Classic (G1) by a half-length to Dullahan, everything appeared to head south for Sutherland.

“I was the ‘It Girl’ and then just like that, I wasn’t,” she said. “I went to a pretty dark place. I got depressed. I chose to step away from horse racing. I should have stayed and tried to overcome the obstacles, but I didn’t handle them very well.

At the 2018 Fair Grounds meet Sutherland broke her left clavicle and fractured her right knee and tibia. The surgical repair and rehab sidelined her again for three months.

“I was doing great, but I’ve never been hurt as bad as I was then,” she said of the setback. “It took a while to recover, and then it was pretty tough to get back in.”

Sutherland, who has ridden 90 horses and has seven wins with purses of $272,600 in 2020, rode She’sothewarpath for trainer Steve Margolis in the Tom Benson Memorial on the final day of racing this meet at the Fair Grounds on March 31.

Now at age 44 and still passionate about the game, she has moved her tack to Churchill Downs and is hoping to catch fire again even though the jockey colony is stacked with the best riders in North America.

“It’s hard because of the COVID-19 protocols. We have to get tested and have our temperature taken to come on the track in the mornings and we have to wear a mask,’’ Sutherland said. “Our agents can’t go on the backside, we can’t go from barn-to-barn and see the trainers.

We have to go back to our cars after we work a horse, and there are so many jockeys here. We had a social distancing birthday party at Robby Albarado’s farm the other night and we all talked about it.

“A few of the guys are really busy, but when it’s 52 jockeys deep and 45 of them are top riders, including 20 of the best in the world, it’s tough to get the mount. I’m a good jockey but there are a lot of good jockeys here. There are just so many to choose from. I understand.”

“If I were younger I would have gone somewhere else,’’ she said. “But I’m still getting calls to get on really good horses.”

During the first four days that Churchill was reopened this month, Sutherland didn’t have a mount, although she said Margolis has given her the return call of She’sonthewarpath in upcoming graded stakes on the grass. She thinks that’s just the beginning.

“I know my ability and I know what I know (about race riding). With everything I’ve gone through I know that whoever I ride for, I’m going to do a great job,” she said.

There is plenty more she’s enthusiastic about. She’s in a committed relationship with jockey Corey Lanerie, who lost his wife Shantel to breast cancer two years ago, and they are raising his daughter, Brittlyn, 12, and are in the process of buying a home in Kentucky.

“I’m very grateful that Corey and I get along so well and that we’ve both had a new and fresh start. This whole COVID thing has brought us even closer together.

And Brittlyn is doing great. We’re excited to move on and move forward together,” said Sutherland.

She’s also optimistic about a burgeoning real estate career and, as she completes the process of getting her Kentucky license, is working with the brokerage owned by former basketball star Rick Robey, who won an NCAA championship with Kentucky in 1978 and an NBA title with the Boston Celtics in 1981.

“He’s taken me under his wing and he and his wife, who is an interior designer, are great. I have a license in interior design and that’s another interest, so it hits on all cylinders,’’ said Sutherland. “I’m excited that they see something in me that they believe is going to be awesome.”

“There are lots of things that I’m working on. I’m looking for an author to write my book. I listen to Master Classes (the online series) all the time. I’m trying to learn as much as I can about public speaking because I would love to do a handicapping show on one of the networks, like TVG.

I’d like to help other jockeys market themselves and become a brand. I love my fellow jockeys and would like to help them do things that will make money for them. I love golf and I’m working on a signature line of golf clothing for women. And I’m learning Mandarin. I have a lot going on.”

Sutherland, who believes wholeheartedly in women supporting women, endorses the Me Too movement and is proud that she’s a trailblazer for younger women, thinks she might be able to pull off the difficult double of riding and real estate despite the hard work required for both.

“That’s the direction I want to go while continuing to ride. I’m not putting any pressure on myself,” said Sutherland, who practices yoga, meditation and creative visualization and still dreams of competing in the Kentucky Derby.

“At this point, I’m happy, I’m healthy and I’m in a really good place. I love riding and I want to really enjoy it. Whatever happens, happens. I’m going with the flow. This is my new reality. Whatever direction I’m going in, I’m just going to go with it and be grateful.”

She still has plenty of drive and her only direction is forward.

“My life is very fulfilling and satisfying now. It’s just very different from what it was,” she said. “I’ve had a great, great career. It was amazing. It was awesome. But I still love riding and I’m still here. I’m not done yet.”

If you enjoyed this piece, check out other articles at our horse racing news section!

Lynne Snierson, a former director of communications at Arlington Park and Rockingham Park, currently is a freelance writer and racing publicist. She covered thoroughbred racing as an award-winning sportswriter for newspapers In Boston, Miami, and St. Louis. She lives in New Hampshire with Mavis, her retired AKC champion Shetland Sheepdog. Secretariat remains her all-time favorite horse.