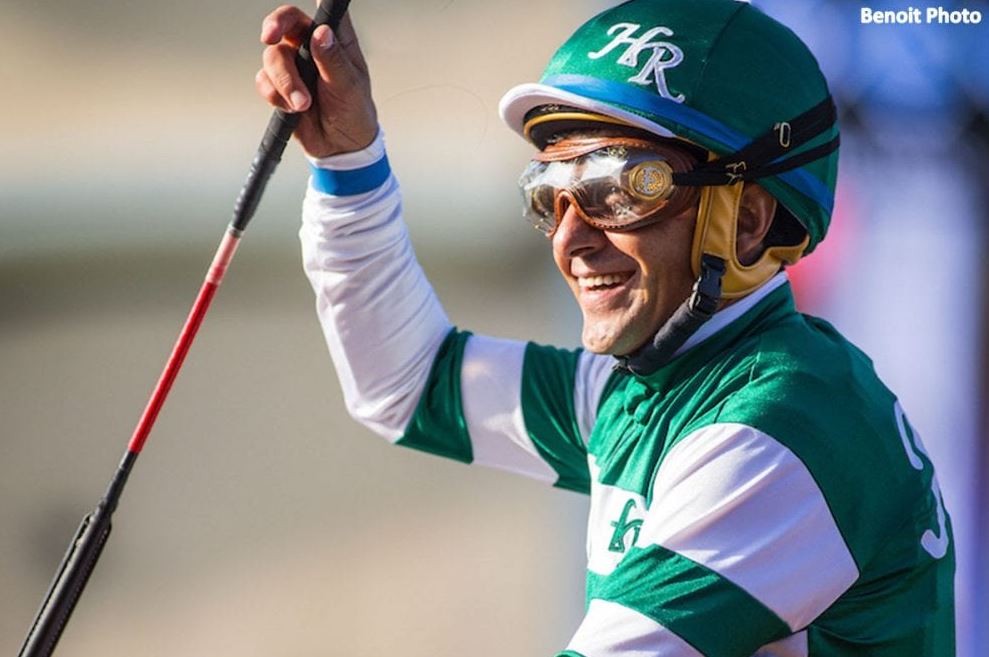 Hall Of Famer Espinoza Scores Riding Double On First Day Back: ‘It’s Like He Never Missed A Beat’

Victor Espinoza is back.

The Hall of Fame jockey made a storybook return to the races Saturday after an extended absence of a month, during which he spent time in his native Mexico providing love and care for his ailing 90-year-old mother, Gloria.

The three-time Kentucky Derby winner and 2015 Triple Crown king on American Pharoah had two mounts Saturday, winning both with moves right out of National Velvet.

Espinoza, who turns 49 on May 23, rallied from eighth and last on Achilleus to win the sixth race at a mile on dirt by a half-length for trainer John Sadler, with whom he has enjoyed great success in the past. It was Victor’s first ride since March 19 when he finished second by a head-on 7-1 shot American Heights.

Espinoza scored another dramatic victory in the seventh race, courageously slipping Ce Ce through a narrow opening on the rail in the stretch to win by 3 ¾ lengths for Michael McCarthy.

Espinoza had ridden the 5-year-old daughter of Elusive Quality to back-to-back Grade I victories last year in the Beholder Mile and the Apple Blossom Handicap.

But it was business as usual Sunday morning for Espinoza, who was working horses at Santa Anita.

“It was a good day,” Espinoza said of his return. “I started in the right direction. I planned to have Achilleus close to the lead, but he broke so slow it seemed like he wasn’t moving. My experience has taught me one thing, though: never give up until the race is over.

“Many times, horses don’t have that motivation early on, and if I give up, we don’t have a chance. Animals are smart, but no matter how far you are into a race, don’t give up on them.

“Ce Ce showed her class. She’s always been an amazing mare, she came back fresh, and her race was excellent.”

Espinoza had more good news on the familial front.

“My mother just turned 90 and never had any serious problems until she fractured her back,” he said. “Then everything fell apart. But now she’s recovering and getting much better.”

“I’ve often told people Victor can step away like this and be ready to ride when he comes back because he’s always working out and taking care of his body.

“He’s not a partier or anything like that. He’s always in tip-top shape. … It’s like he never missed a beat.”

That’s all well and good, but two victories on Saturday, especially as incredulous as they were, assuredly can’t hurt business.

After his victories, Victor generously spent time chatting with media and greeting fans, his wide smile beaming all the while.

Some of his well-wishers were in their early teens, providing Espinoza with an up-close and personal opportunity to cultivate a nucleus of fresh faces for a sport in dire need of them.

They greeted him like a rock star, eager for pictures and autographs, with one distinct exception: Victor’s instrument is a Thoroughbred, and he still plays it like a Stradivarius.