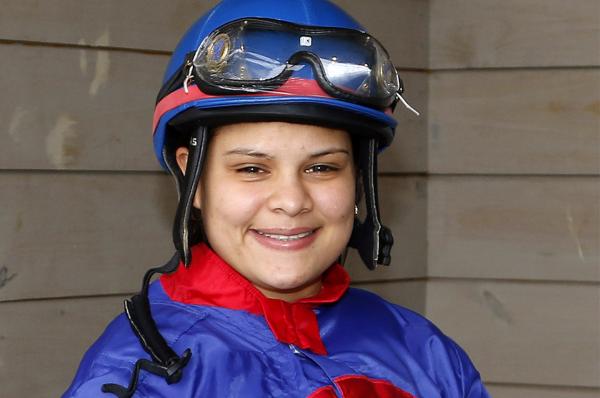 Yarmarie Correa, the first Panamanian “jocketa” in the history of our equestrian, to be nominated for the title of “Apprentice Rider,” which in the United States is known as Eclipse Awards.

This talented young woman, 27, stated that she had enjoyed sports throughout her life, including soccer and flag football, but commented that she found no way to earn her own income in none of them.

This is the reason why he decided to leave his university degree in Banking and Finance, about to finish and decided to venture into horse racing, because “they are animals and I like them very much.”

To do this, he had the support of his uncle Eric Correa. That is how he entered the Technical Academy for the Training of Riders Laffit Pincay Jr., located at the Presidente Remón racetrack, in the Juan Díaz district. Once inside the training center, his interest in horse riding increased because of the environment that existed, and he became much more passionate about the subject of horses.

His incorporation to the academy occurred in March 2018, and on December 7 of the following year, in 2019, he graduated with the highest academic index and apprentice on the track.

In the United States, it has been officially riding for a year and a month.

He commented that he feels good because he has performed satisfactorily “as I have been told.”

“Many people believed in me because of my talent; in fact, others did not, simply because I was a woman, but I have shown that my condition as a woman has not prevented me from advancing in this profession at all,” said Yarmarie with satisfaction.

During his apprenticeship career, he received two awards: one for statistical leader, which he explained included two three-month seasons, and upon completion of one, he started the other from scratch.

In other words, she highlighted that she had been the “jocketa” with the most races won at the racetrack—Thistledown, Ohio, with a total of 77 in the two seasons.

He reported that a maximum of 12 horses per race and six participate in these competitions, and the riders come from different parts, especially from Latin America, among other countries, Peru, Puerto Rico, Venezuela and, very scarce, from the United States. They are mostly male riders, with very few girls.

She attributes her success to the dedication, commitment, discipline, enthusiasm and charisma she has when speaking with the coaches, obviously to God, her family and the riding agent, Carlos Pérez, who was the person who took her to the States. United. He mentioned that he only saw a photograph of her to discover her potential and talent; that is how she travelled to the United States.

In Panama, he participated in the riding of 32 horses and obtained five victories, which earned him professional recognition. From there, he was presented with the opportunity to travel to the United States (although he had to complete a year in competition in that country). He took advantage and managed to capitalize due to the follow-up to his career been given from the United States. Thus, Mr. Pérez motivated her to move to Ohio to take advantage of the discharge pounds.

He recalled that on December 7, he graduated after winning his first race with the mare Iviz and the fifth race was won on January 4, with the mare Men.

His first ride in the United States took place on January 14, 2020, at the racecourse in Mahoning Valley. That day he came in third grade with the mare Sassy Sister. But on January 21, he won his first race with the mare Miss International, a date Yarmarie Correa remembers.

The “jocketa” Correa informed us that she has been nominated for Apprentice Rider in the United States, known as the Eclipse Award and that she feels happy, content, grateful to God and to the two coaches who have supported her since she arrived in Ohio and who have been key people in her learning: Gary Johnson and Jaison DaCosta and their gratitude to Mr. Carlos Pérez.

She acknowledged that her effort had given her the chance to advance in her career by being nominated for those awards. He noted that the decision would be announced on January 28, the date on which he will celebrate his 28th birthday.

The nominees, apart from her, are Alexander Crispín, from Puerto Rico, and Luis Cárdenas, from Peru. He expressed that, to win that nomination, it is the reward for effort and dedication to his career as a “jocketa.”

Read Also:  What Chapo Guzmán offered the DEA to prevent the United States from requesting his extradition.

Yarmarie Correa completed her primary studies at Belisario Porras schools, in the San Francisco district and Great Britain, in the Pedregal district, both in Panama City. His secondary studies were attended by the Ovidio De León student centers in Parque Lefevre. He graduated from the San Judas Tadeo parochial school, in 2011, with a bachelor’s degree in commerce.

He continued his university preparation in Banking and Finance but did not continue it to become a “jocketa.”

Her dedication, commitment, strength, skill and responsibility are the keys that have opened up spaces for this young “jocketa,” who triumphed in Panama and now in the United States, to achieve success.