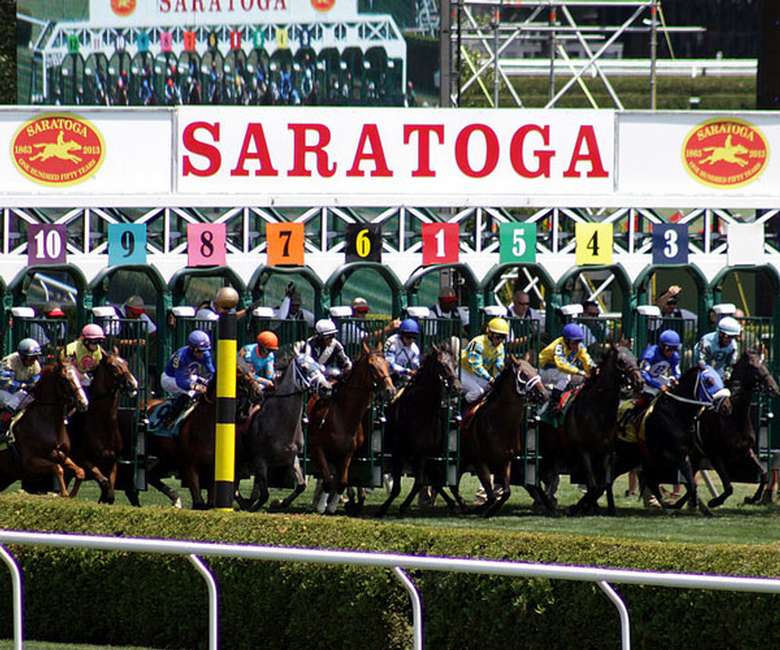 That will change soon enough.

The seats were empty.

That will change on July 15.

Thoroughbred training began at Saratoga Race Course this weekend, and, on Monday morning, several horses from James Bond’s barn galloped over the main track. At the same time, renovation work continues at the Oklahoma Training Track on the other side of Union Avenue.

The barns will continue to fill up this spring, and Oklahoma is scheduled to open for training in a few weeks. Meanwhile, the New York Racing Association expects to get guidelines from the state soon, perhaps this week, on what procedures and protocols it will need to follow to let spectators attend the races again.

Gov. Andrew Cuomo announced last Wednesday that racetracks in New York could re-open to 20% capacity as of this Friday, which means that Saratoga fans shut out of the track in the 2020 COVID-19 pandemic, will be able to attend the 2021 meeting. The familiar sight of horses on the track Monday will be joined by the familiar sound of fans when the 153rd meet opens on July 15, a welcome development for those who race, as well as those who watch.

“We had a great season last year, but we definitely missed the fans,” said Ryan Bond, James Bond’s son and assistant. “It wasn’t the same Saratoga. It was just the horsemen over there cheering for their own horses. It’s nice to hear the roar of the crowd, and even if it’s limited capacity, it’ll be nice to have the locals enjoying the horses. You can tell they missed it.”

NYRA communications director Pat McKenna said the hope is to let some fans onto Oklahoma watch morning workouts at some point this spring, a popular tradition, especially after the Whitney Viewing Stand was built in 2013. He said the vaccination rate in New York is an encouraging sign that by the time the Saratoga meet arrives, significantly more than the current 20% level will be permitted to attend.

The fans who attend the meet should expect a variety of health and safety measures, like physical barriers on the apron, to maintain social distancing between those who like to watch the races along the outside rail.

“As it relates to Saratoga Race Course, the fact that we’ll be opening to fans at Belmont Park very soon allows us to implement the exact rules and regulations that have yet to be distributed from the New York State Gaming Commission and the Department of Health,” McKenna said.

“We’re hoping to be able to utilize the aspects of both Belmont and Saratoga, which make them ideal for physical distancing in outdoor areas with plenty of space. The backyard here at Saratoga, the apron . . . how can we creatively utilize these areas to welcome fans safely?”

The main track typically isn’t open for training until a few weeks before the meet. Still, the renovation work on Oklahoma, overseen by NYRA Senior Vice President, Operations & Capital Projects Glen Kozak, won’t be finished until early May.

Horsemen are looking forward to getting on the new training track, which has a fresh base layer installed and will get a new cushion layer over that. It has been widened to accommodate a new drainage system and relieve some of the horse traffic congestion in the mornings.

This renovation, which includes safety rails, mirrors what was done to the main track in time for last year’s meet. Oklahoma is popular because it’s deeper, more tiring and designed to get horses to a level of fitness that might be more difficult to pull off on the main.

“They renovated that [main track] a couple of years ago, as we know, and it came out really nice,” said trainer Chad Brown, who was scheduled to have some of his horses ships to Saratoga on Monday. “It’s the smart thing to do. We want to make sure this Oklahoma track is not rushed in any way and is put in the right way. Which it is; it looks terrific so far. I’ve been up there to see it a couple of times, and I’ve been involved in getting updates along the way.

“Much like anything Glen Kozak does, he does it thoroughly and of high quality, especially with the racing surfaces. So I’m excited about the new track.”

“Hopefully, they leave that main track open to where we can still train aggressively if we need to while Oklahoma is getting broken in,” Ryan Bond said.

“It’s tough on horses, but it’s also a great track to get a horse fit and to see what you have. Sometimes on the main track, they would go a little too quickly because it’s prepared for the afternoon. So if you have a horse who can do 50 [seconds for four furlongs] on Oklahoma, they’re doing 48 and change on the main track. They’re gaining more fitness over there, and Pops has had a lot of success training the big horses. It’s just worked out. It’s going to be a feeling-out process.”

Kozak said he consulted with trainers before any work was started.

A line of trees cut down on the Oklahoma backstretch so workers could remove the roots from underneath the base will be replaced with new plantings. A portion of the front stretch was not widened because “we tried to be cognizant of the buildings and the historical aspect of a couple of the barns that we couldn’t widen that area,” Kozak said. “That was part of the discussion with Saratoga Preservation.”

Once the cushion layer is installed, Dr. Mick Peterson, a renowned expert on racetrack surfaces, will test it for consistency.

Oklahoma hasn’t undergone this extensive type of work in decades.

“Remember, that track was almost flat before,” Kozak said. “We saw that there was no pitch to the track, basically, and a lot of it [rainfall] just went through the natural sand underneath. After we removed the cushion, that’s why the recommendation was made to do that type of base.

“It was spotty the way that track drained in the past. On the backstretch, after significant rainfall, you’d see the center of the track draining at a different rate than the rest of the track on the inside.

“We’ve already done compaction tests and everything else, so we know what the base is, but he’ll [Peterson] go with the ground-penetrating radar around the track and use the mechanical hoof tester to make sure it’s consistent and comparable to what’s out here [on the main track].”

“We’ve been thrilled over the last year with the main track,” Ryan Bond said. “We’ve been training over it, racing over it, and the horses have been great. It’s going to be exciting to have a new Oklahoma, a little wider. Pops always likes to train over there, so that’ll be nice.

“We still do a lot of the breezes on Oklahoma, but that might change this year, depending. But we’re very excited to be back.

“Looks like the locals are happy to see us, too.”