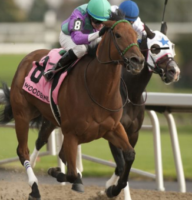 Each week until the opening day of the 2022 Woodbine Thoroughbred meet, a familiar name in the sport will be in the spotlight, answering some fun, offbeat questions, giving readers a unique perspective into their personality.

David Moran hails from Templemore, Ireland and started his career in 1999 with trainer Frank Ennis before becoming an apprentice rider for Jim Bolger in 2001. Moran became a full-time jockey in the spring of 2009 and over the next two years made six trips to Woodbine with Carolyn Costigan trainees, garnering wins with Roan Inish in the 2009 Princess Elizabeth Stakes and 2010 Woodbine Oaks. In 2011 Moran and his family moved to Canada and he scored his first win as a Woodbine regular with War Ridge. His first stakes win after the move came on Sept. 8, 2012 in the La Prevoyante Stakes with Nikkis Bold Gelato. Since then, Moran has guided horses to multiple stakes wins, including 12 graded victories.

You can have any racetrack job for a day. Which one do you choose and why?
“That’s a tough one. I suppose I’d go with doing the TV commentary. That would be pretty cool. I think that would be a lot of fun. You could set up the races, talk about the horses, who has the best chance, and then make your selections. I don’t know if I could keep up with the broadcast crew, but it would be fun to give it a try.”

You get to invite three people over for dinner. Who gets the invites and why?
“The first person I’d go with is Shaquille O’Neal. I think he’d be a lot of fun to hang out with. I’ve really got into the basketball with my kids, and we’re always watching documentaries on either horse racing, basketball or hockey. I love Michael Jordan, but the most fun guy I love watching is Shaq. He makes me laugh all the time, but I love his generosity to the game and to people. He just seems like a fun person. I think if you combined him with [Woodbine trainer] Mike Doyle, that could be a lot of fun. Those two would be great. Who else would I put there to make it a fun night? I’m going to go with Kevin Hart.”

You can play host to a group of racing fans at any racetrack in Ireland. Which one do you choose and why?
“My favourite racetrack in Ireland has always been Leopardstown, but I also like The Curragh. But the Galway Races Summer Festival, it’s really something to see. It’s probably the most fun racing in Ireland for a week.”

You get a backstage pass to any concert. Who do you choose and why?
“That’s a tough one. I think I’d go with either Eminem or Garth Brooks. They could be fun. I’d have to really think hard about which one I’d pick. I like all kinds of different music, but those would be the two I’d narrow it down to. It would be cool to talk to them, to hear about how it all started for them and how they became so successful. But I wouldn’t sing backup if they offered. It wouldn’t turn out well.”

To view the 2020 version of David Moran’s Riders Up Segment, click here.