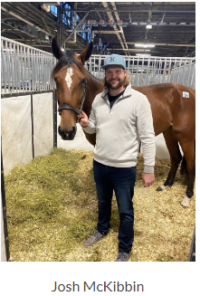 Each week, a familiar Woodbine Mohawk Park horseperson will step into the spotlight to answer a handful of fun, offbeat questions while giving readers a unique perspective into their personality on and off the racetrack.

A rising star in the training ranks, Josh McKibbin has horse racing in his DNA. His grandfather, the late Dr. Lloyd McKibbin, was a world-renowned veterinarian who spent a lifetime in the Standardbred industry. Josh’s father, Terry McKibbin, has been training since the mid-1990s and enjoyed a career-best year in 2018 when he won 35 races. Currently, in his fourth year as a conditioner, Josh, also an owner, is well on his way to setting several personal-best numbers in 2022.

If you could sit in the race bike of any horse, past or present, who would you choose and why?

“I’d have to go with Somebeachsomewhere. He was such a special horse, a great competitor, and one of the all-time greats. I remember watching him compete and being amazed by him, cheering him on, and seeing the impact that he had on so many people.”

You get to have lunch with any horseperson, past or present. Who do you choose?

“My grandpa was a well-known vet and loved everything about horses and horse racing. I’d like to have lunch with him again. I got to know him until I was about 12 when he passed away. We never really talked horses, so I would like to pick his brain and try to learn as much as I could from him. I work with my dad and he’s passed down a lot of that knowledge, but it would be nice to have that opportunity to talk with my grandpa.”

Who has the best pro sports uniform?

“I have to go with a lie, I guess. If Saturday night [the Toronto Maple Leafs lost to Tampa Bay in the NHL playoffs] had turned out differently, I’d have another answer. We’ll just go with baseball. I’m a big Toronto Blue Jays fan and a baseball fan too. My heart’s a little broken today, so let’s go with the Blue Jays. I’d go with their white uniform. I like the brightness of that, the white with the blue mix. It’s a really nice look.”

Other than a horse, what is your favourite animal?

“I have two pretty good barn cats right now. They’re pretty special boys. I was never really a huge cat person, but these guys are awesome. Hank and Frank, the two brothers. They couldn’t be any more different. One is a hunter [Hank], always on the go, always working, always doing stuff, and the other guy [Frank] wants to be a housecat, content to just lie around the barn. They are quite the pair.”

You get a ticket to see any music concert, past or present. Who do go with?

“I would go with Garth Brooks. I’ve never seen him, but I’ve always been a fan. I just watched a documentary on him long ago, and he just seems like a really nice, down-to-earth guy. If I got a chance to ask him one question, it would be, ‘Do you want to buy a racehorse with me?’”