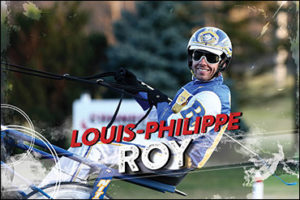 Louis-Philippe Roy came to Ontario after launching his driving career in his native Quebec, and quickly became one of Woodbine Entertainment’s top reinsman. He won the O’Brien Award as Canada’s Driver of the Year in 2018 and 2019 and will make his first appearance in the National Driving Championship this year after qualifying in 2018 (he bypassed the event due to other commitments). In 2021, he surpassed $25 million in lifetime earnings. Roy is just over 50 wins away from 2,000 for his career.

You get to make a guest appearance on any TV show or series. Which one do you choose and why?

“I don’t have any talent when it comes to singing, but I wish I could be on a show like American Idol or Canadian Idol. I’m a big fan of music, so anything related to that would be perfect. I like all kinds of music. My friends and I listen to almost everything. Growing up, we listened to a lot of punk.”

What is your ideal weather to drive in?

“It would be afternoon racing, sunny and around 25 degrees. Then you could be done around three or four in the afternoon, and go enjoy a couple of beers with your friends.”

If you could meet one Canadian sports legend, who would choose?

“That is very good question. I would go with [NHL superstar] Mario Lemieux, who comes to mind first. I watched him play on TV and he was obviously one of the best players to ever play the game. I know he was so good at golf and he could have maybe made a career of it, so I would probably want to go and play a round of golf with him, and just talk about his career, what it took for him to reach such a high level, and some of his biggest highlights.”

If they were to make the Louis-Philippe Roy movie, who would play you?

“I’m a big fan of Adam Sandler, so I would like to have him take that role. I’m not as funny as him, but I like his comedies. I like all his movies, but Happy Gilmore is my top one. It’s kind of a classic and I’ve seen it plenty of times. I laugh every time I watch it.”

What name would you choose for a Standardbred?

“I’ve raised a few horses with my brother and one mare I own called JK Soundofmusic, all the names of the babies coming from her are related to Roberto Bissonnette an artist, a singer I like who passed away at a young age in a helicopter accident. I ended up naming all the horses after songs he wrote. He used to be a hockey player and played in the Quebec Major Junior Hockey League. He was invited to the Ottawa Senators camp, but he never made it in the NHL. After, he made a career in Quebec as a singer. His songs were about hockey and sports. So, I would come up with something that would pay tribute to him.”