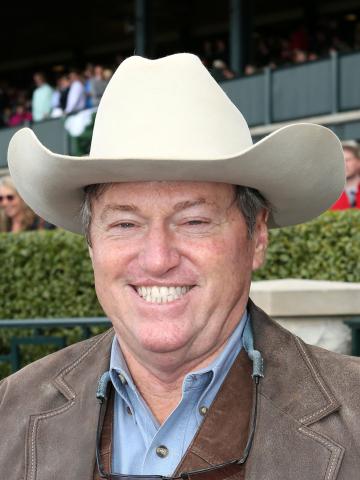 Sent out Lovely Maria to win the 2015 Central Bank Ashland (G1) before she captured the $1 million Kentucky Oaks (G1) at Churchill Downs.

Prepped Havre de Grace at Keeneland in October 2011 before her fourth-place finish in the Breeders’ Cup Classic (G1) en route to being named the season’s Horse of the Year.

Recorded his 1,000th career victory when he sent out He’ll Pay to win the Rushaway at Turfway on April 2, 2016.

Took a year off from training in 2010. During his leave, he reversed roles with his wife, Cindy, who has been his assistant. With her at the helm, the Jones barn won 35 races, including the Gazelle (G1) with No Such Word. Cindy also managed the operation in 2014 after Larry – who often gallops many of the stable’s horses – was severely injured in a training accident in April at Delaware Park.

Won the 2008 Big Sport of Turfdom Award from the Turf Publicists of America.

Before he became a successful Thoroughbred trainer, Larry was a commercial farmer in Hopkinsville, Kentucky, who grew corn, tobacco and soybeans and raised cattle and hogs.

“I was farming at the time and farming was not going well in the ‘70s, so I sold out and started doing this,” he said. “I grew up showing horses, so it was a natural move over.”

Larry first dabbled in the Thoroughbred industry in 1980 as the owner of a $2,500 claimer named Ala Turf, who was a winner. “I had a prefect record as an owner,” he said. He obtained his trainer’s license in 1982 and won his first race the following year. “I thought things weren’t getting trained right, so I might as well do it myself. I found out training horses was a whole lot more fun than farming.”

Jones always wears a cowboy hat, which he describes as “my signature.”