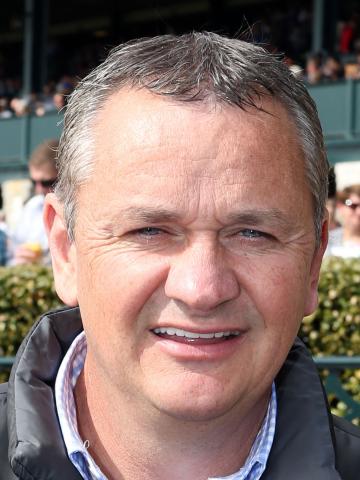 Starters In The Toyota Blue Grass

First Keeneland stakes win was the 2006 Ashland (G1) with Bushfire for the first Grade 1 win of his career. Also won the race in 2019 with Out for a Spin.

Eddie grew up around horses. His father, Tommy, rode hunters and broke horses, and his uncle John Kenneally was a steeplechase jockey who became a flat and steeplechase trainer. In the 1964 Aintree Grand National, his uncle finished second aboard Purple Silk, beaten a nose. Eddie’s brother, Johnny, operates Erinvale Thoroughbreds, one of the largest consignors in Australia.

After working for Camas Park Stud in Ireland, Eddie came to the U.S. in 1987 to prep Camas horses for American sales.

After a year, he began working at the race track, breaking yearlings and exercising horses and then became an assistant trainer. He worked for Rusty Arnold, Tom Skiffington and Niall O’Callaghan. Eddie took his first training job in 1994 as the private conditioner for Jack Kent Cooke, who owned Elmendorf Farm. After Cooke died in 1997, he opened a public stable.