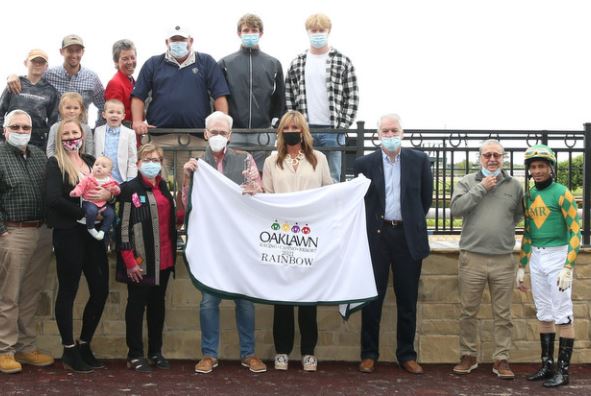 Aidan Green has made a name for herself this year at Oaklawn. Emphasis on “her.”

In what has become a running joke, Green noted that some people had praised the trainer for “his” snowballing success during the 51-day meeting that ends May 1. Perhaps, the confusion abated somewhat last Friday when Green saddled her first career stakes winner (Blame J D) in the $150,000 Rainbow for 3-year-old Arkansas-bred sprinters.

The Rainbow marked the eighth career winner for Green – all this year at Oaklawn – and placed her in a tie for 11th in the local standings through Sunday. She also had five seconds and seven thirds from just 31 starters.

Green began the meeting with four horses, but her stable has grown to approximately 10 through claims. Green saddled her first career winner recognized by Equibase, racing’s official data gathering organization, Feb. 11 with one-time Triple Crown hopeful Kristo. It was the 21st recognized starter for Green, who saddled her first horse in 2020, according to Equibase.

“He’s as good as I’ve had so far,” Green said. “As an Arkie-bred, he hasn’t shown any weaknesses, really.”

Green assisted trainer Robertino Diodoro the last two years at Oaklawn, helping him capture his first local title in 2020 and Diodoro’s major client, M and M Racing (Mike and Mickala Sisk), set a single-season Oaklawn record for victories by an owner with 61 in 2019. Green, among other things, also breaks horses for a local pinhooking group and hauls horses for M and M.

Aidan Green grew up in Canada around Quarter-Horses, and draft horses her family-owned and was a star volleyball player. She signed with Texas Tech before transferring to Texas-El Paso, a four-year letterman (2006, 2007, 2008 and 2009). Green said she met her future husband in 2010 when he was training at Sunland Park in suburban El Paso. They married in 2013 and have three children – Olivia, 5; Owen, 4; and Oakley, 6 months.

As many races as Aidan Green has won this year at Oaklawn, it might seem like she’s raising her kids in the Larry Snyder Winner’s Circle. Normally after each victory, Green has her picture taken holding Oakley, with Olivia and Owen standing directly behind her on a platform.

“Our kids are pretty infamous back here, but anybody outside of the backside probably doesn’t know or think that I have three,” Green said. “The other day, Olivia and Owen were standing on the edge of the paddock rail, and this lady walked up and said, ‘Where is your guys’ mom?’ And they’re like, ‘In there.’ She thought they were on their own.”

If she’s not saddling a horse or visiting the winner’s circle, you might see Aidan Green, between races, carrying Oakley or pushing him in a stroller. The spirited Olivia and Owen could be racing or playing on the first floor of the grandstand or grandstand apron, often interacting with Diodoro and some of his employees.

“Don’t get wrong, they’re good kids,” Diodoro said. “But they’re wild suckers. They’re not the typical kids, get them up early and make them play, and then they’ll get a nap. They’ve got energized batteries in them. I’ve never seen kids like this. They might get a little cranky, but they don’t stop. It’s just, ‘Go. Go. Go.’ It’s nuts.”

Diodoro calls Ike Green, 41, “an excellent horseman” and said his wife possesses the organizational skills of a “computer.” In the past few years, the Greens have overseen divisions for Diodoro at Churchill Downs and Saratoga before opting to focus more on developing their own stock.

“It wouldn’t really matter either way if they ran in Ike’s name,” Aidan Green said. “He was going to do more the baby side of things on the farm, and we didn’t want any conflict of interest, Diodoro and Ike, since he was his assistant. We just went this way, and I love it. I really am. We always laugh that when I first started dating Ike, I said: ‘I hire, I fire, and I pay’ because you’re up at the track all morning and I’m at the barn, and they don’t listen to me if you pay them. That was our rule. We’ve come a long way since then.”

Except for that part about Aidan being a “she” and not a “he.” Green pointed to a well-known national horse racing podcast as a recent comical example.

“My nephew was laughing at one video because he said they talked like they know you, but then they still call you a guy,” Green said. “One guy said, ‘A lot of you don’t know this about Aidan Green, but he is young, and he is striving.’ Somebody commented: ‘You know, that’s a girl, right?’ ”

The Greens keep broodmares on their eight-acre farm about 15 minutes southwest of Oaklawn. Ike Green said they’ll likely remain in the Hot Springs area this summer and send a handful of horses to his brother, trainer Greg Green, at Lone Star Park.