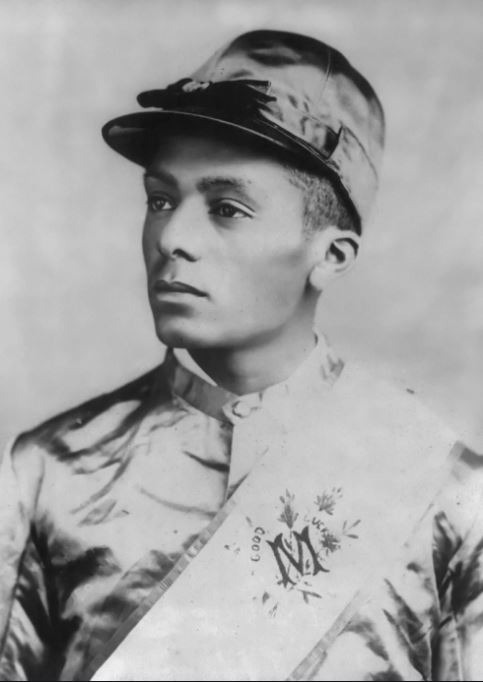 Isaac Burns Murphy (April 16, 1861 – February 12, 1896) was an American Hall of Fame jockey, who is considered one of the greatest riders in American Thoroughbred horse racing history. Murphy won three runnings of the Kentucky Derby.

Murphy rode in eleven Kentucky Derbies, winning three times: on Buchanan in 1884, Riley in 1890, and Kingman in 1891. Kingman was owned by Jacobin Stables (co-owners, Preston Kinzea Stone and Dudley Allen) and trained by Dudley Allen, and is the first horse co-owned by an African-American to win the Derby. Murphy is the only jockey to have won the Kentucky Derby, the Kentucky Oaks, and the Clark Handicap in the same year (1884). He was called the “Colored Archer,” a reference to Fred Archer, a prominent English jockey at the time.

According to his own calculations, Murphy won 628 of his 1,412 starts—a 44% victory rate which has never been equaled, and a record about which Hall of Fame jockey Eddie Arcaro said: “There is no chance that his record of winning will ever be surpassed.[3] By a later calculation of incomplete records, his record stands at 530 wins in 1,538 rides, which still makes his win rate 34%.[4] Isaac Burns Murphy was the first jockey to be inducted into the National Museum of Racing and Hall of Fame at its creation in 1955.[5]

Murphy died of heart failure in 1896 in Lexington, Kentucky, and over time his unmarked grave in African Cemetery No. 2 was forgotten. During the 1960s, Frank B. Borries Jr., a University of Kentucky press specialist, spent three years searching for the gravesite. In 1967, Murphy was reinterred at the old Man o’ War burial site.[3] With the building of the Kentucky Horse Park, his remains were moved to be buried again next to Man o’ War at the entrance to the park.[3]

In 1955, he was inducted into the Jockey’s Hall of Fame at Saratoga, New York.[2] In 1940, Murphy was honored with one of the 33 dioramas featured at the American Negro Exposition in Chicago.[6] Since 1995, the National Turf Writers Association has given the Isaac Murphy Award to the jockey with the highest winning percentage for the year in North American racing (from a minimum of 500 mounts).