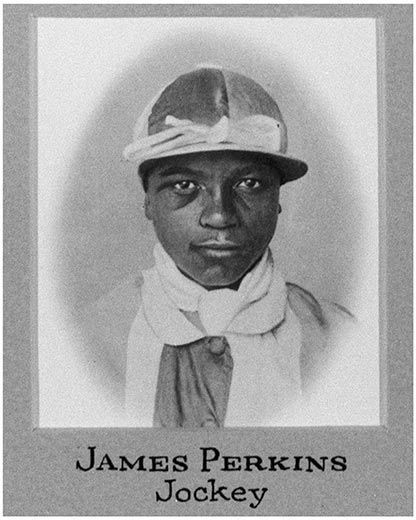 James “soup” Perkins, a jockey, rode Halma, wire to wire win in the Kentucky Derby in 1895, at 15 years of age. one of the youngest black jockeys, his nickname came from his love of soup, he weighed 90 lbs. his parents were slaves at Major Flournoy’s Walnut Hall, Lexington, Ky. His father was John Jacob Perkins, a Standardbred trainer, and his mother was Mattie. Soup Perkins Alley was named after him in Lexington in 2011. he began riding at age 11 at the Latonia racetrack in 1891. on Oct. 16, 1893, he rode 5 horses to win that day on the Old Ky Assn track and finished 2nd on another mount. Out of 762 mounts, he had 192 victories.

One brother, William Perkins, a prominent trainer, had just topped the list of trainers of winners when he died in 1927. They saddled the winners of 82 races.his other bro was Frank Perkins, a trainer. James was earning $5000 per year, a large sum at that time. Soup died of heart failure in Hamilton, Ontario. His body was brought home to be buried with black horse riders in Lexington, Ky.

His mother, sister, and bro are named on the plaque in the family plot. Major Matthew Flournoy’s will leaves to his first son, Victor, 400 ac with the manor house, Walnut Hall, and 1000 ac along the river, to second son Marcellas, 600 acres, to dau Emily, 100 ac and 1 slave, to dau, Betsy, 100ac and 1 slave, to dau Louisa, some lots. The major must have favoured emancipation as he freed 3 children, Warren, Mary, Jane, the children of Rachel, Anny, and Nancy. They were to be raised and taught a trade by Victor and his wife. For help in raising these children, Matthew was given to Victor and his wife. Possibly these were Soup’s family. Copies for family only.

James Perkins, one of the two youngest jockeys to win the Kentucky Derby, was 15 years old in 1895 when he won the Derby riding Halma. Perkins was born in Lexington, KY, and his parents, Jacob and Mattie Perkins were the slaves of Major Flournoy. Perkins died in Hamilton, Ontario. He was a brother to horse trainers Frank and Will Perkins. For more, see The Great Black Jockeys, by E. Hotaling; Black Maestro: the epic life of an American legend, by J. Drape; and “Soup Perkins, last noted Negro rider,” the Lexington Leader, 09/12/1911, p. 10. See also the Perkins Family entry in the NKAA Database.