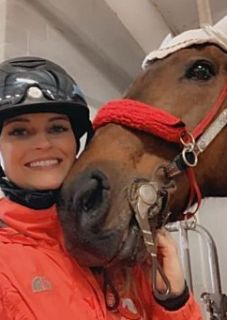 Ashley was completing her stint as an outrider during a morning training session at Cincinnati’s Belterra Park Thoroughbred track, jogging her horse along the outer lane when a horse finishing a workout mile passed at the inside rail. Ashley’s horse reacted to noise as the other horse went by, setting off a chain of events that led to Ashley ending up with a broken back that kept her sidelined for more than five months.

Despite an accident that may have sent less courageous souls into another line of work, Holliday was back riding in February and recently began working full-time again at Miami Valley Raceway. She will return to both Belterra and Scioto Downs when they open in May.

If anyone thought three broken vertebrates and three ruptured discs were going to keep the 32-year-old Holliday down, they need to get to know her better.

Fear or pain will never keep her off a horse.

“I love it,” the Ohioan said. “If I could be a millionaire doing this, I’d probably be the happiest girl in the world. Nobody loves what they do more than I do. I go home at the end of the day and if I’m on Facebook, I’m looking at outrider horses; I’m looking at stuff to buy for my outrider horses. I’m thinking about what I can do to make them better. I really thoroughly enjoy horse racing.”

That love comes from her upbringing. Ashley’s parents owned up to 30 horses at one time. Their vacations revolved around racing. Her mom Sherri Holliday is a former trainer and her dad, Ken Holliday, has 5,562 wins as a driver. Ashley’s interest, though, had nothing to do with sitting behind a horse.

“I just always wanted to ride; I’m fascinated by it,” said Holliday, who currently has three riding horses that she alternates for work. “I read all the horse racing books until my parents finally caved and bought me a riding horse.

“Outriding just combines all the things I love. I love horse racing, I love riding horses in general. To be able to combine two of those things and make a living doing it, is a childhood dream come true for sure.”

With plans on being a veterinarian after high school, Holliday was hired as an outrider at Minnesota’s Running Aces by Gregg Keidel. She figured it would be her summer job.

“Running Aces is a seasonal spring-summer meet, and I thought I could work my school schedule out to make it a summertime gig,” Holliday said. “I never imagined at that point it would turn into what it did. After a couple of years doing it seasonally, I thought I was ready to go into it full-time. It just was hard finding the right opportunity at the right spot. It took me four or five years before I fell into working for some good tracks and kind of expanded things and it really took off as a viable career.”

Keidel, now the race secretary at Miami Valley, hired her once more.

All was well with the world until that fateful August day in the Queen City. It was 10:15 a.m.; the track was closing in 15 minutes. Holliday thought she was through for the morning, but her adventure was just beginning.

As a horse breezed at the rail, a noise — perhaps a clump of dirt from the horse’s hooves hitting the rail and echoing — caused her horse to stop suddenly.

“It was hot, my horse was sweaty, things were slick, and everything had loosened up throughout the day,” Ashley said. “My saddle kind of slipped back, and he didn’t like that very much.

“So, within half a second it went from jogging along nice and easy to not moving at all, to bam! We were galloping wide open and bucking like a bronc. Even though I was staying upright on his back, I just had no control over him. I was in the middle of his back, way further back than I’d like to be.

“At that point, he wanted the saddle off, he was scared. I realized I was fighting a losing battle. I tried to gracefully tuck and roll and get off the horse. It didn’t quite go as I planned. I kind of fell, half-jumped; half got thrown all at the same time.”

Ashley’s horse took himself off the track and returned to the barn on his own. But Holliday hit the ground so hard she came out of both boots. The pads inside her safety vest got twisted and the zipper busted open.

“I finally quit rolling on the ground, and I was like, man, that’s a first,” she said. “I just popped right up, and I couldn’t quite stand all the way up straight. I couldn’t catch my breath; I had this feeling that I broke my tailbone or something. I thought something wasn’t quite right.”

And yet, the ultimate professional wasn’t about to shirk her duties.

“I wanted to keep going; I had to work the races at Scioto that night,” she said. “I was like, ‘I don’t have time to be hurt, I’ve got to get home, got to get in the shower, get in the car and get up to Scioto. I can’t take off.’ Only I had ever used the horse up there at Scioto. I thought I can’t call another girl to ride that horse; they’re not familiar with it. I was just so adamant I was fine.”

But halfway through her drive home, Holliday could not catch her breath and called her husband, driver Josh Sutton, to talk her through the remainder of the drive. When Sutton saw his wife emerge from the truck, they immediately went to the hospital. Upon arrival, Ashley was still insisting things were fine.

“I remember being in the hospital bed and I told my husband he could go to work, go ahead and drive, that I was OK,” she said. “Within five minutes after he left, the doctor came back and said, ‘OK your back is broken.’ I was like, ‘Wait … what? My back is … huh?’”

Sutton had the same response.

Word spread quickly among friends, family, and employers and the reaction was usually the same — can she walk? She could, but work was not an option that night, or for months to come.

Holliday was able to function for a normal life, although getting up and downstairs and getting in and out of bed was difficult for a while.

“It was awful,” she said. “My entire life is horses; I live, eat, sleep, and breathe them. I was in the saddle at least 10 hours a day and I go from that to where I could barely walk out on my deck and look at them for the first two months. It was hard. It makes you realize exactly how much your life is invested in one thing.”

She also had another revelation during that time after hearing a harness driver had a severe accident at a fair and needed immediate surgery.

“I thought, wow, I was pretty lucky,” Holliday said. “I credit that to wearing my safety vest. I think that is probably what saved me from getting a lot worse off than I was.”

During her recovery, Ashley did a lot of TV binge-watching, with her favorite being Heartland, a show about horses, of course. As for how she kept from going nuts, Holliday just turned the tables.

“I think I drove my friends crazy,” she said.

Anxious to return, Ashley bent the doctor’s orders only slightly when it came to easing back into riding. Having seen her dad be involved in a number of accidents and try to come back too fast was a lesson for Ashley. When she finally returned to outriding last month, Ken had some valuable advice.

“He’s been in a lot of wrecks on the racetrack and gone down a lot of times and always came back from them,” Holliday said. “He said, ‘You’ve got to remember what happened, you went through it. At the same time, you’ve got to put it out of your head and move on, because if you don’t do that now, you’re never going to. You’re going to think about it all the time.”

She took her dad’s advice and, three weeks into Ashley’s return, she had to catch a loose horse on the track.

“I’m glad it happened as quickly as it did because I don’t have to think about it anymore,” she said. “It was like, OK, I got it over with, I’m back. It’s all good. I didn’t really think about it that much but everyone else was like ‘You think you’re going to be scared? Will you be nervous?’ I was like, should I be nervous?”

She’s not nervous, nor is she out of shape any longer. Admitting that it’s “hard to mimic the rigors of a 14-race card,” while laid up, Holliday feels her body is back to where it was before the injury and she feels 100 percent recovered.

When it comes to her broken back, Ashley chalks it up to another lesson learned.

“There have been hairy moments I remember now than more so at the time,” she said. “Having scary situations you’ve been in, with things that went right and didn’t go right, you have to learn from them and remember them.

“At the same time, you have to put them out of your head because if you worry too much about everything that could go wrong, you’ll scare yourself to death with the what-ifs, and what-could-be and what-might-have-happened. You just have to focus on what’s going on right in front of you.”

Fortunately for Holliday and the harness racing world, she still has an outriding career in front of her. It will take more than a broken back to keep such a devout horse lover down, let alone out.

by Rich Fisher, for the USTA