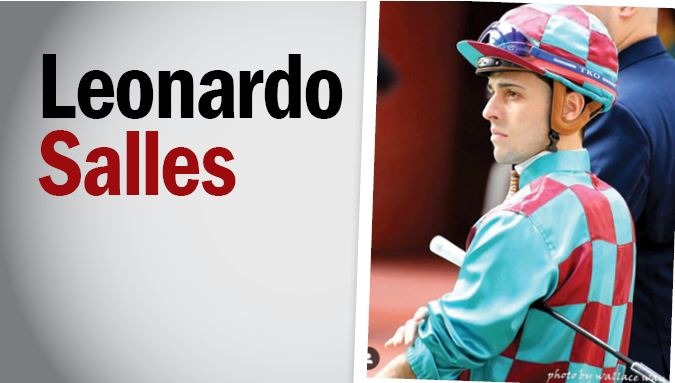 Leonardo Salles may be a new rider on Woodbine’s circuit, but the 25-year-old Brazilian jockey is well versed when it comes to the international racing scene. Over the last three years he’s ridden in Dubai, Macau, Hong Kong and the U.S. before setting his sights on Canada last fall.

Arriving in Toronto last October, Salles is quick to admit the challenge of riding in the cold weather was a specific reason for coming to the Ontario-based oval.

“I heard Woodbine is the coldest place they have racing in the world. I saw the videos of the jockeys with the (face) masks and being on the horses when it is -16 or -19 and that’s crazy – I didn’t believe it. I was feeling cold in Hong Kong. I had never seen snow in my life before I came to Canada. So I said, ‘Wow, this is going to be crazy and very interesting for me.’”

Born in the city of Sao Paulo, Salles did not grow up in a racing orientated family, yet found himself on horseback one day when dared by a friend.

“When I was 13 years old I had the first love of my life. This girl did show jumping. I was in love at that time as a little kid and I followed her and I saw that she was trying all the time to be a show jumper. I said, ‘Why do you try so much, it looks so easy?’ She dared me, ‘It looks so easy? So you can do it?’ And I just did. I just went there and jumped the stuff. It was the first time I rode a horse, touched a horse and her dad said, ‘Wow, you have talent. How many years did you ride?’ I said, ‘No, this is my first time.’”

Gicen his natural ability to ride, the ball soon began rolling for the young teenager.

“He talked with my parents and then I went to another city where I could start to ride. Before you start to ride you need to go to the basic places like the barns and start from the bottom. Clean horses, shoe horses, we are doing everything with the horses. So I went to a farm and for me it was an incredible experience,” said Salles.

To further his education on horseback, Salles attended the apprentice jockey school in the city of Curitiba (at Taruma racetrack), in Parana, Brazil.

Interestingly, a very well-known jockey at Woodbine learned at the same school several decades earlier. “Coincidently, I went to the same school as Eurico (Rosa Da Silva). Eurico started there,” said Salles who crossed paths with the veteran jock when he found himself riding in Hong Kong and Dubai.

In 2009, at the age of tender age of 15, Salles began race riding at Sao Paulo racetrack where he nabbed champion apprentice in both 2010 and 2011. He continued to hone his craft at the track for another three years, amassing 580 wins before spending a year riding in Saudi Arabia. For two years, between 2015 and 2017, he rode primarily in Macau, while also participating in races in Hong Kong, America and Dubai. In 2017, Salles then took his ever improving game to Japan where he rode at three different tracks (Tokyo, Gifu and Nagoya). To date, Salles has secured 9 Group 1 wins, 10 Group 2 wins and 11 Group 3 wins.

In September 2017, Salles ventured across the Atlantic to try his hand on the North American racing circuit. He soon found himself riding in Florida at both Gulfstream Park and Park West until the end of the year. In 2018, he made his way back to Japan to ride, yet remained curious about riding at Woodbine. He reached out to someone already well established at the track to inquire about the racing scene and climate.

“I am a very close friend of Eurico. Eurico is the champion jockey there in Canada. I called Eurico and asked him about it and he said, ‘It’s good, but it’s pretty cold.’”

With the help of his agent Pram Seebah, Salles organized his papers and rode his first race on Canadian soil in mid-October. His first win came in early December aboard Bancroft DeSouza’s trainee Stopvictimizingme. Riding a total of 64 races from October to December, Salles managed to secure another two wins before the 2018 meet wrapped up.

Despite riding only a couple of months in Canada, Salles has nonetheless enjoyed every bit of the journey so far.

“Canada has given me so many experiences. It’s not only about the racing, because there is no difference from America — the same way (round), same kind of horses. In Dubai, it’s the wrong way, its up hills and Arabian horses. So, it’s completely different to Canada. But what really moves me in life is the things I can learn, the things that are different. The snow I never see, so let’s do it. It’s not only about the racing, it’s the university of the street,” said Salles who tries to make the most of every experience and place he visits.

Keenly acquainted with the frigid weather that engulfs the track during the latter part of the season, Salles has yet to enjoy the warm temperatures that Woodbine welcomes earlier in the year. However, that may change this year as Salles already has a plan in mind for his 2019 riding campaign.