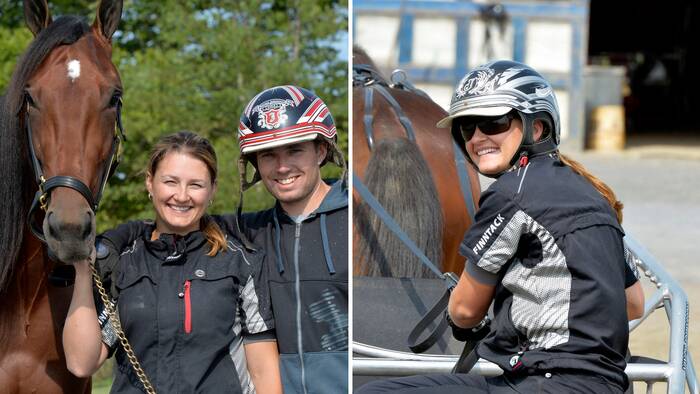 Following in your parents’ footsteps can be a hard act to follow, especially for Nancy Takter Johansson. After all, it will be almost impossible for anyone to live up to what her father, Hall of Famer trainer Jimmy Takter, has accomplished in the business.

Takter, the son of renowned Swedish trainer Bo William Takter began driving at an early age and won his first race at age 18 in Malmo, Sweden. When he moved to the United States in 1978 he worked for Continental Farms before returning to Sweden to marry his childhood sweetheart, Christina. Two years later, the newlyweds moved back to the United States and started a family of four children: Nancy, Jenny, Tiffany and Jimmy Jr. It didn’t take long before Takter was one of the leading trainers on the Grand Circuit.

He has conditioned and trained many world champions such as: Malabar Man, Enjoy Lavec, Always B Miki, Kadabra, Nuncio, Moni Maker, Trixton, Father Patrick, and Tactical Landing among many more, and earned over $130 million in purses. Jimmy is also a six-time Trainer of the Year.

In 2018, Takter announced that he was ready to retire and would be turning his reins over to his daughter, Nancy, along with top assistant trainer Per Englom.

It is no surprise that his daughter Nancy started working in the barn at a young age.

“I was always in the barn as a child. When we moved to the USA I was 1 ½ years old. Dad went to work for Soren Nordin and at that time it was just my dad, mom, and I,” Johansson said.

When Nancy was 3 years old, she helped Marcia Hamilton, the groom of Baltic Speed, care for the champion.

“Shortly later, dad got a couple horses he trained on the side, so my mom and I would help take care of them. I would go to the barn every weekend, helping him jog, brush and bathe the horses and when I turned 8 or 9 I started to train a little. We had a big pacing colt named Lansford Hanover that I trained. I remember going a mile in 2:10 thinking that was pretty cool!

“Lansford will always mean a lot to me, although I can’t pick a favorite. Every horse has a story. JK She’salady was pure talent. Not only was she a sweetheart to be around, but accomplished everything on the track.

“Then there’s Western Vintage aka/ Gator who is so special for he put me on the map in the Grand Circuit the first year I had my own stable. He was a $7,000 yearling and swept the New Jersey Sires Stakes, was second in the Metro, and won in Lexington in 1:49.4 at 2.”

Johansson said Kissin In The Sand is another favorite, “but she was a handful! I remember telling her owner Marvin Katz in January of her 2-year-old year, ‘She’s either going to be really good or really bad — there will be no in between.’ Kissin and I have a real bond. She doesn’t really trust anyone but she loves me. I’m her person. Even though I was really busy last year, I made sure I took care of her myself. The end results showed it was all worth it. But I need her as much as she needs me. Unlike many trainers that have a life when they are done at the barn and go golfing to unwind — me, I have Kissin.

“Kissin In The Sand is from a great maternal family — one of the best in the sport. She is by Somebeachsomewhere. She’s big, long legged and has perfect conformation. She is as tough as they come and never gives up — be it in a race or when I give her a haircut. She’s the complete package.”

“I think it’s important for a driver and trainer to communicate. Drivers are important in the sport, but personally I feel they get a little too much credit because they are only as good as the horse they are driving. I think Ron Pierce was the best of all time. I wish he were still driving since I have my own stable now,” Johansson said.

“I prefer not to drive in the race. There are professionals for that and I leave it to them. However, I have contemplated driving in more qualifiers when I want more of an idea of what’s going on with a horse in a race. Also, a lot of catch drivers don’t like to get up early in the morning when they have been driving in late races.”

Johansson is married to trainer/driver Marcus Johansson. “My husband is also a very good driver who has a great set of hands, especially when a horse needs to be babied a little. Marcus has that special touch they need and is the BEST at breaking babies. Luckily, we work very well together.

“As far as our children, we have a boy, Marcus Jr., and a girl, Ella. Although they both really like the horses, I don’t see them being as involved in harness racing as I am. I see Ella being an owner and she obviously has ‘an eye’ in picking one out. After all, she is the one who picked out Captain Crunch.

“It was love at first sight for Ella and the son of Captaintreacherous, out of Sweet Paprika, (from the family of Dan Patch Award-winner Sweet Lou and $2.78 million-earner Bettor Sweet). She spotted him at the sale and begged me to buy him. I also liked the colt for he is a big, strong, good-looking horse, but I wasn’t sure we would get him. I put together a group of owners, set a budget and was lucky enough to have the last bid at $85,000.”

Lucky indeed, for Captain Crunch won the $600,000 Breeders Crown for 2-year-old male pacers, along with The Governor Cup and amassed $616,113 for the year.

As far as feeling pressure in walking in her father’s footsteps, Nancy said she is not concerned.

“I admit that I do get a little annoyed when I’m introduced as ‘Hall of Fame’ trainer Jimmy Takter’s daughter. After all, I’ve had my own stable since 2014 and have trained three Dan Patch winners, one O’Brien winner, and ‘The Horse of the Year’ in both the USA and Canada. I feel like I have a nice enough resume that I don’t need to be introduced as his daughter anymore.”