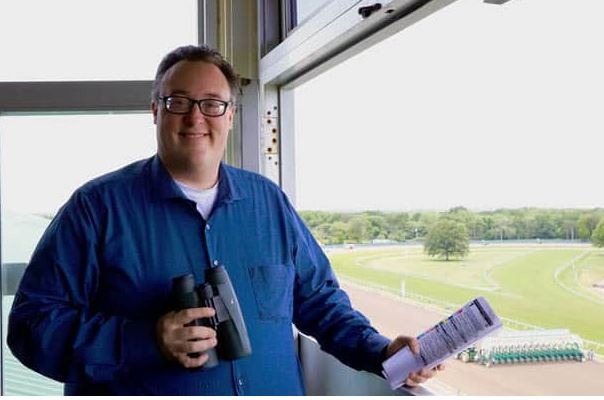 Jason Beem, who has called races at numerous Thoroughbred tracks since 2006, has been hired as the announcer at Tampa Bay Downs. He will begin on June 30, the first day of the track’s two-day Summer Festival of Racing.

The 41-year-old University of Washington graduate currently announces at Grants Pass Downs in Oregon and will begin his third season at Colonial Downs in New Kent, Va., on July 19. At Tampa Bay Downs, he replaces Richard Grunder, who retired on May 2 after 37 years and more than 37,000 races at the Oldsmar oval.

Beem was chosen from among dozens of applicants after a nationwide search. A lifelong fan of racing with a strong social media following, Beem is excited to bring his enthusiastic style to a track that has grown by leaps and bounds over the past 20 years.

“I love the racing there and am excited to become a part of it,” said Beem, who hosts an hour-long podcast each Monday through Friday – the Jason Beem Horse Racing Podcast sponsored by Twinspires – on which he interviews many of the sport’s leading figures.

“From calling races at Colonial Downs and Monmouth Park (in 2019), I got to know a lot of the horses and horsemen who compete at Tampa, and it really appeals to me as a fan. It’s good, quality racing, the turf races are outstanding and it’s a very horseplayer-friendly track.”

Margo Flynn, the Vice President of Marketing and Publicity at Tampa Bay Downs, believes Beem will be embraced by listeners accustomed to Grunder’s energetic, fan-friendly style, while attracting new followers through his social-media platforms. In addition to his podcast, Beem is active on Twitter ( @BeemieAwards ) and Instagram ( @jasonbeemracing ) and has a YouTube channel.

“Jason hit all the checkpoints we were looking for,” Flynn said. “He sees racing through a fan’s eyes and understands the need to cultivate new fans and develop ways to target them. He has a big pair of shoes to fill, but he has the experience and love of the sport to make his own mark at Tampa Bay Downs. We are excited to have him on board and to introduce him to our fans on June 30 and July 1.”

Beem, who started his announcing career in 2006 at River Downs (now Belterra Park), describes his race-calling style as high-energy and information-driven. “I have a quick delivery, I try to get as much information as I can to the horseplayer and I’m very descriptive.

Accuracy, obviously, is the most paramount thing for me.

“It’s funny because I still get nervous before every race, even a $2,500 claiming event,” he said. “I’m surprised that I always have that adrenaline rush when they’re entering the gate, but I’m glad that hasn’t stopped after 15 years.”

Beem knows it is a next-to-impossible task replacing Grunder, who is a jockey’s agent at Canterbury Park in Shakopee, Minn. In an almost-eerie coincidence, both called races at since-closed Portland Meadows in Oregon at similar stages of their careers, with Beem working there from 2006-2014.

“I don’t look at it as trying to replace him, because he is a legend,” Beem said. “I just want to be a great member of the Tampa Bay Downs team, get to know the horse-playing community and get a lot of people excited about horse racing.”