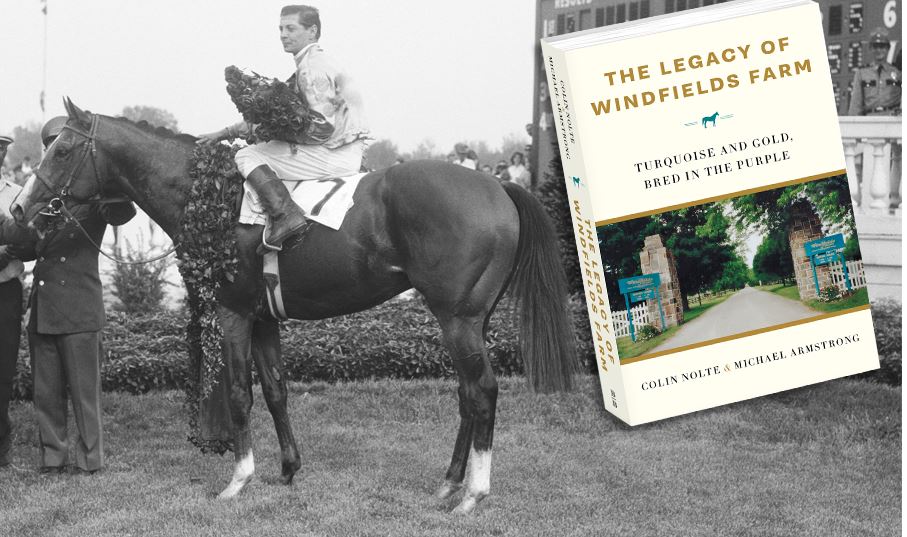 The Little Horse That Changed the Face of Racing

Northern Dancer, the feisty stallion from Ontario’s Windfields Farm, exploded the myth that Canadian-bred horses could not compete on the world stage.

A testament to the foresight of his owner and breeder, Canadian businessman E.P. Taylor of Windfields Farm, Northern Dancer won the Kentucky Derby and the Preakness Stakes in 1964 and went on to change the face of international racing through his sons and daughters, becoming a household name in the process.

But there is more to the Windfields Farm story than Northern Dancer, and Colin Nolte and Michael Armstrong have written a tribute to the continuing legacy of E.P. Taylor and Windfields in their book “The Legacy of Windfields Farm: Turquoise and Gold, Bred in the Purple.”

In it, they explore other offspring produced by Northern Dancer’s sire and dam who made their mark on the track or in the breeding shed and highlight the global extent of Windfields’ impact on horse racing, with leading racers and sires in Japan, Australia, South Africa, and South America, as well as Europe and North America.

The importance of E.P. Taylor to racing throughout Canada in the 20th century is also featured, along with detailed chapters and charts on the foundation mares and their descendants, Northern Dancer, the impact of his parents and sons, and the behind-the-scenes employees who made it all happen.

The following is an excerpt from “The Legacy of Windfields Farm: Turquoise and Gold, Bred in the Purple”

Hero to a Nation

The lead-up to the Kentucky Derby is full of obstacles not associated with the average major horse race. The press coverage is intense. The parties and galas of Derby Week are strenuous for the connections who have a horse in the field. Trainers are challenged to keep their prized steeds calm and relaxed during this increased focus, relying heavily on their staff. Luckily for Luro, he had long-time Windfields groom Bill Brevard watching over Northern Dancer 24/7. This is not an easy task when you have a high-strung three-year-old colt. But Horatio Luro had been through this process many times before. He understood the pressure that comes with having a Kentucky Derby contender—he had won the race two years earlier. He knew what to expect and how to keep Northern Dancer fit and content as they prepared for the race.

The Dancer’s daily routine consisted of some sort of work day. On a warm morning, he would go for an exercise gallop at 6:45 a.m. On cooler days this would start at 8:30. “I am training him conservatively since he is a late foal,” Luro stated. “This horse is holding his flesh and doing very well, better than all winter.

“Northern Dancer is a tough little horse, with a remarkable constitution. A race takes nothing out of him. I have him galloped two miles almost every day. I will breeze him every fifth or sixth day. I am trying to build up his capacity, lung power, and energy. I believe in everyday exercise and not too much breezing. His disposition is improving every day. Last year he was very playful, bucking and squealing all the time and trying to run off. His attitude is much kinder this year. You have to be very careful. I trained both his mother and father and neither liked the whip. They gave you everything they had on their own.”

Luro went on to say, “Northern Dancer is small but solid. He is fed at 10:30 a.m. after his workout. After the feeding, he usually lies down and takes a two-hour nap. He is fed again at 5:00 p.m. and he retires at night at 11:00 and gets to his feet around 2:00 a.m. when he hears the night watchmen come into the barn. The men have to feed Dancer first, or he will tear the barn down in protest.”

During Derby week, Luro said, “[He] slept like a baby, because that is precisely what he is at this stage. He is an intelligent horse who knows which days are for work and which days are for rest. On the rest days, he relaxes. I believe much of his smallness can be attributed to his youth. He is always a good doer (eater), which I attribute to his relaxed attitude.” Luro predicted that if the track came up fast on Saturday, the race could be run close to two minutes flat.

Northern Dancer was very calm following his final pre-Derby work on a Thursday. Luro had him out grazing and noted, “He doesn’t resent people. He is looking for sugar most of the time, but this grass is great. It is just like a salad to him and this grazing is very soothing for him. It is more relaxing than nourishment.”

Northern Dancer was in the best shape of his life. His racing form had never been better. He was ready for the big stage.

Hill Rise came to Churchill Downs on the wave of a winning streak. He continued his fine form when he won the 7-furlong Forerunner Purse at Keeneland and the one-mile Derby Trial Stakes at Churchill Downs on the Monday before the first Saturday in May. Roman Brother finished second in the Trial. Bill Shoemaker rode Hill Rise in both races and said after the Forerunner, “I like this horse. He does want to play around a bit, and I had to whack a couple. I can see this one is a little lazier than Northern Dancer. You have to keep his mind on his business.”

Bill Finnegan, the trainer of Hill Rise, said, “Hill Rise has gained weight and keeps developing all the time. He is in wonderful condition, everything about him pleases me.” Hill Rise stood 16.2 hands and weighed between 1,050 and 1,100 pounds during his racing career. He had a seventy-two-and-a-half-inch girth. Don Pierce, who had ridden Hill Rise in the Santa Anita Derby, said, “I have never ridden a better horse in my life.” This, coming from a jockey who had ridden the likes of Tomy Lee, Decidedly, and Kelso, was high praise.

Hill Rise seemed a little more agitated in Kentucky than he was back in California. Finnegan had to line the horse’s stall with foam rubber because “the colt tried to kick his stall to pieces. He had never done anything like this in California.” Shoemaker noted that Hill Rise seemed nervous in the gate for the Derby Trial, so Finnegan ordered gate schooling for the colt. Despite this, Shoemaker still believed he had made the right choice for his Derby mount.

Saturday, May 2, 1964, broke with warm sunshine, which lasted the entire day. The weather was perfect for the grand stage that was the Kentucky Derby. The track was rated fast, the crowd overflowed and the anticipation built to a crescendo as the twelve horses for the Derby came on the track to the glorious tradition of the tune “My Old Kentucky Home.” Canadian history was about to be made.

Northern Dancer broke from the number seven stall alertly and in good order. Hill Rise was unhurried from stall eleven and was bumped twice along the front straight past the twin spires into the first turn. Mr. Brick, after brushing Quadrangle out of the gate, set the early fractions of 22 2/5 for the first quarter and 46 flat for the half-mile. Fast times indeed. Hartack took Northern Dancer to the rail to save ground around the first turn in sixth place, four-and-a-quarter lengths behind the leaders.

Along the backstretch, Northern Dancer continued to let the leaders set the pace, but he began to move up midway down the lane. He left Hill Rise behind by a couple of lengths, and Hartack asked him for more as they entered the far turn. The Scoundrel had come to the head of Mr. Brick and took the lead entering the turn, with Northern Dancer bearing down on the outside. Dancer took the lead near the end of the turn and gained control as the field entered the homestretch. He was four lanes wide of the inside rail.

Through the stretch drive, Northern Dancer maintained his relentless speed and pulled away from The Scoundrel, but Hill Rise loomed on his outside. The big horse began to cut into Dancer’s advantage. You could literally see the will and determination of Northern Dancer as he held off his larger foe and crossed the Churchill Downs finish line a neck ahead of Hill Rise. Northern Dancer had won the Kentucky Derby in style, setting a new track record of two minutes flat for the 10-furlong distance. An entire country began to celebrate.

Finishing third, some three-and-a-half lengths back, was The Scoundrel, with Roman Brother another nose back of him. Quadrangle finished fifth, a neck behind Roman Brother, with Mr. Brick three lengths farther back in sixth.

Northern Dancer pranced to the winner’s enclosure as E.P. Taylor led the full-of-himself colt in. Horatio Luro and the entire Windfields team joined in the celebrations at Churchill Downs, while back in Canada people were out in the streets, proclaiming “Our Horse” was the greatest of them all. Northern Dancer posed with his garland of roses, proud as a peacock.

Post-race comments and tributes came pouring in. Bill Hartack said, “I knew I had a horse with speed. I didn’t want to press him early. When the gates opened I took him in hand immediately. When The Scoundrel made his move around the last turn, I let him pace me and we left Hill Rise. With a quarter-mile to go, I felt I had to make my move. Luro told me if I hit the horse to hit him only on the shoulder, and not hard. I did and he reacted to it. From the quarter pole in I hit him hard on the rear, and he responded to that too. So I put him to a hard drive, hitting hard all the way. In the Bluegrass, I rode him to see what he was made off. I learned he is agile. I knew he would be well trained. This horse is all blood and guts.” Hartack added, “After the Bluegrass, I was never more confident in a Derby ride than I was with Northern Dancer.”

E.P. Taylor commented, “It is a great day for Canada. Northern Dancer has given me my greatest thrill in racing.” Horatio Luro said, “Northern Dancer is consistent, honest, and has a big heart.”

When interviewed, Shoemaker said, “I am not sorry I chose Hill Rise over Northern Dancer. If I had to do it over I would do the same thing. The race was very close. My horse ran as well as expected. I was gaining at the wire but Northern Dancer was a lot of horse. The ground ran out on us before we could catch him. Hartack had a ton of horse under him, while in contrast, I was punching at my horse to get him going.”

Bill Finnegan felt that both horses ran their best race in the Derby, but said that he needed to train more speed into Hill Rise in order to combat the speed and agility of Northern Dancer. He eagerly awaited a rematch.

Sports fans in Canada, especially in Toronto, were celebrating not only Dancer’s historic victory but also the third consecutive Stanley Cup triumph of their beloved Toronto Maple Leafs the week prior. Heady days indeed. While Canada celebrated, Northern Dancer went back to the barn, ate his post-race meal, and had a sound, deserved nap. He had achieved all of this more than three weeks before his actual third birthday.

“The Legacy of Windfields Farm” is available as an ebook and in paperback on Amazon here.