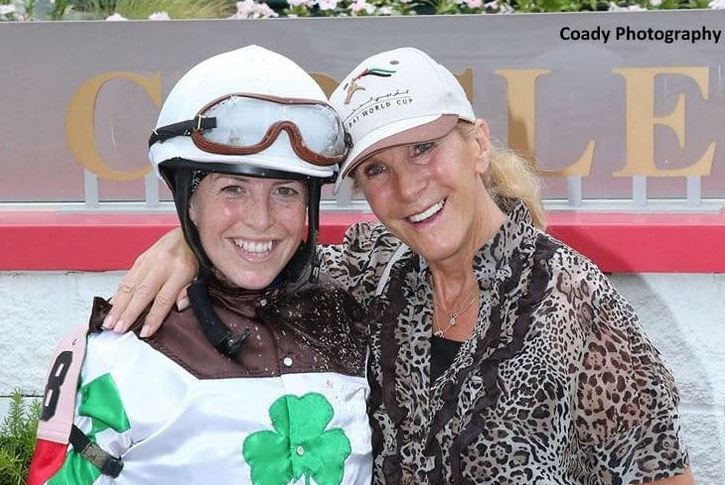 British-born Sophie Doyle is the daughter of former trainer Jacqueline Doyle and sister to Grade 1-winning European jockey James Doyle. Sophie spent two winters in the U.S. working as an exercise rider before moving to the country to become a jockey after having had great success as an apprentice jockey in England.

Sophie moved to California in 2013 before shifting to the Kentucky circuit in 2014. In 2015 she gained her first graded stakes won when she partnered with 2015 Breeders’ Cup Filly and Mare Sprint contender Fioretti to capture the Grade 2 Thoroughbred Club of America Stakes at Keeneland. Doyle captured another Grade 2 win in 2019 when she won the Fair Grounds Oaks aboard Street Band to earn a place in the Longines Kentucky Oaks.

On Sept. 21, Doyle and Street Band won the Cotillion Stakes at Parx Racing to earn a “Win, and You’re In” berth to the Longines Breeders’ Cup Distaff. It was the first Grade 1 win of Doyle’s career.

Sophie and her mother, Jacqui Doyle

It’s been quite an adventure for jockey Sophie Doyle since coming to ride full time in the United States in 2013. This summer, another chapter will be written in her story when she competes at Arlington International Racecourse for the 2018 meet.

Doyle, 31, has been surrounded by racing her whole life, which is no surprise considering that she grew up in Lambourn, England, also known as the “Valley of the Racehorse.” From a young age, Sophie and her younger brother James – a Group 1 winning rider overseas – were surrounded by horses and learned riding and horsemanship even before starting school. Much of this is thanks to their mother, former trainer, and jump rider Jacqueline Doyle, who still resides in England but makes occasional trips to the United States to watch her daughter in action.

“She’s been a big supporter; she’s great,” Sophie Doyle said of her mother. “She’s supportive, but she’s also one of my biggest critics. She watches every race that I ride in without fail. It doesn’t matter what country she is in; she watches the races everywhere she goes. She’ll message me and call me after the races. She’s my brother’s biggest supporter and me.”

From the beginning, Jacqui Doyle has instilled in Sophie and her brother James a great deal of knowledge about riding and racing.

“She taught us a lot,” Doyle said. “She rode races herself as an amateur, and she actually never rode on the flats. She only rode on the fences. So she was even braver than my brother and me. When she talked to us about races, we give her 100 percent because she’s been there and done it all herself. She taught us everything we know.”

One of the first horses that Doyle recalls being around was Meditator, a steeplechase horse trained by her mother and was responsible for helping plant the seed that would grow into the rider that Doyle has become today.

“Meditator was a big, seventeen-hand chestnut old national hunter jumper,” Doyle recalled. “He was so kind, and my mom bought him as a two-year-old. I used to go and get him from the field and play around with him. I was 18 months when I first got on him, with the help of my mother. He was actually the first racehorse that I galloped when I was eleven.”

Doyle’s hard work and learning from a young age proved to have paid off. In 2010, she became the leading female apprentice in England and secured 28 victories. Not long after, Doyle decided to move across the pond and begin riding in the United States, despite having no connections in American racing. Nevertheless, Doyle established herself as a successful and self-made female rider in the United States and made all of her current connections independently, which even her mother admits is quite impressive.

“I find it hard to put into words what she has achieved,” Jacqui Doyle said. “We knew my son James nor myself or my parents have no contacts in America. We couldn’t open one single door, but she’s done it entirely on her own.”

So how does one go about making such an extreme transition?

“I think it’s down to having thick skin in this game,” Doyle said. “My brother [James Doyle] said to me one day, ‘Soph, I don’t know how you do it, I could never do it.’ It’s tough whatever country you’re in. Everywhere is tough and has its up times and its downs times; you have to be mentally tough. I remember having a jockey tell me one day, ‘Sophie, this game isn’t for the weak-minded.’ You have to be able to think for yourself and care for yourself and have a strong mind. Everything happens for a reason, and I believe that there’s a reason why I pushed to come to America. I enjoy meeting people from around the world because it’s so different everywhere you go. So I think that just generally meeting new people everywhere that I have gone has just been a stepping stone to where I’ve ended up.”

As a mother, Jacqui Doyle admits to having the occasional sense of nervousness when watching both Sophie and James ride.

“There are some nervous moments,” Jacqui Doyle said. “Obviously, they’ve been riding for a good while; I think with James, it’s a different type of nervousness. It’s more the nerves of whether or not things go wrong in a big race or whether or not he gets on the right horse. It’s different racing in Europe, so it’s a whole different ball game. I think racing in America is more dangerous. I’ve been there when she’s had falls, and being so far away if anything goes wrong, it takes you a day to get there. The last time she needed an operation, she said, ‘Come when I’m ready to get back riding, and you can drive me,’ so I went to the states and spent three months driving. I came over in the middle of July. Thank God she’s been grand since.”

Sophie and Jacqui Doyle will probably be missing each other a little extra this Sunday, with it being Mother’s Day. Although Jacqui will not be at Arlington on Sunday to watch her daughter ride, she is sure to be keeping herself up to speed on how her daughter performs. The good news for them both is that England has its own Mother’s Day on March 11.

“She’s fortunate because she gets two Mother’s Days,” Doyle said. “I remember saying to her, ‘You’re lucky America has their own Mother’s Day, so I can treat you when you’re back home again.’”