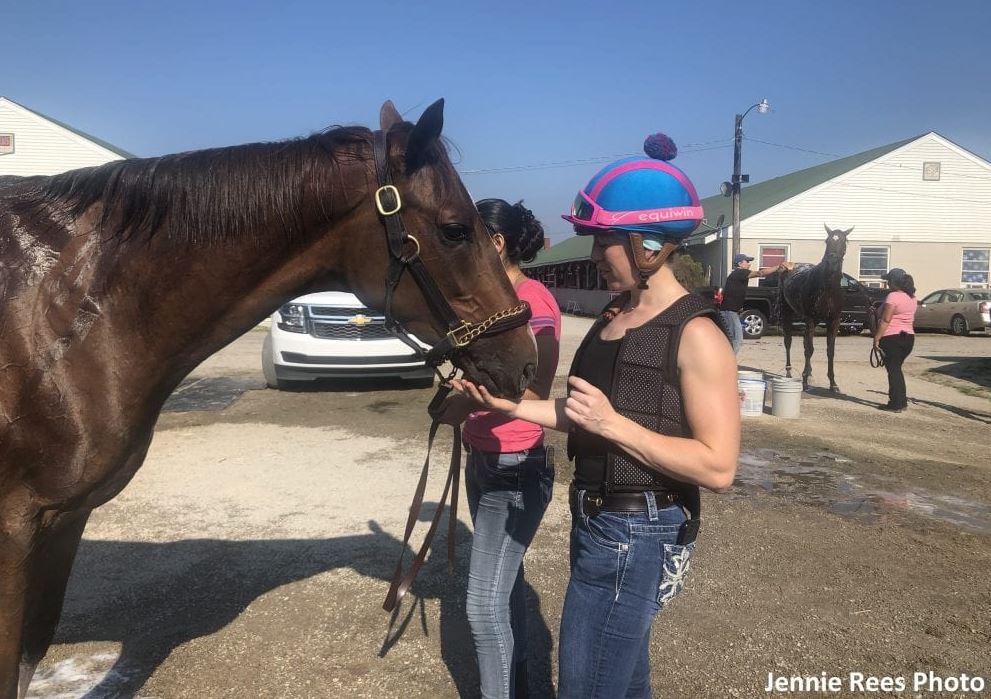 Sophie Doyle: Cancellations Are Tough, But Prospect Of Riding Street Band Gets Me Through

It’s been more than two weeks since I last rode in a race and, while I understand the precautions people are taking, it is frustrating to be here in Lexington doing nothing when other places in America are racing.

The only plan I have is that I know I definitely have one mount to look forward to, and that’s Street Band in the Grade 1 Apple Blossom at Oaklawn Park in Arkansas. It was a million-dollar race, but it’s down to $600,000 owing to coronavirus – though I have to laugh when I say it’s down to $600,000!

Trainer Larry Jones and owner Ray Francis have been so loyal to me, and Street Band is my main priority now, so I’ll do anything I can to ride her, and I’m taking every necessary precaution. I’m basically staying at home – I’ve got my own horses to look after, but I’ll go up to the barn by myself when all the workers are finished.

Theoretically, I could ride work, but I kind of feel that is taking a risk. Unless a jockey has a specific horse that they ride all the time, they’re just taking a risk and adding an extra person who doesn’t really need to be there. Also, I could pick up something, and then I can’t ride Street Band at Oaklawn.

‘She is an exceptional horse to me.’

For me right now, it’s all about her. She is a really special horse to me – I picked up the mount on Street Band because she was fiery and sensitive, and we made such a great bond from day one. She gave me my Grade 1 win last year in the Cotillion at Parx, which is the greatest moment of my career, the ultimate validation of my decision to leave England.

Street Band is just an incredible filly, and it’s been so nice to be part of a journey from where we started at Fair Grounds in the winter to winning three graded stakes and topping that off with a G1. She’s had a couple of runs this year already, but I hope and pray I’ve done everything right to be able to ride her on April 18.

But that’s it for me at the moment owing to COVID-19 having stopped racing in Kentucky. Even when I go to Oaklawn, out-of-state jockeys aren’t allowed to go up the backside, though we can take other rides on the card if we’re named in a stake race.

They do keep updating the protocols, though, so it will probably change again. I did hope I might be able to stay there for a while and maybe pick up some more rides, but it wouldn’t have been easy; you can’t just walk in and expect loads of rides at a new track.

Looking further ahead, things are completely uncertain. I had a good meet at Fair Grounds in New Orleans over the winter, which I really enjoyed, but it was frustrating as I had 16 rides booked for the last week when they canceled it on Louisiana Derby Day.

‘It’ll be almost a month without a ride.’

Then anyone who was riding there wasn’t allowed to ride for two weeks, so anyone at Fair Grounds can’t go and ride at other tracks because of the virus, which has hit hard in New Orleans. They didn’t want us riding at Oaklawn, for example. As it stands, I am stuck – even if I ride on April 18, then it’ll be almost a month without a ride, and I won’t know where I’m riding next.

While I understand the need for caution, I also feel that if you aren’t showing any symptoms and can show you’re negative, you should be able to go and ride. When you see other people who can carry on, and you’re being told you can’t, even though you’re perfectly healthy, it is super frustrating and pretty boring too.

I’m now back in Kentucky, and thankfully there are minimal numbers of cases here, but we’re not racing because the big meet at Keeneland this month got canceled; it was one of the first to go.

Horses need to be shipped in. But hopefully, it will go ahead at some stage, and after that, we’re looking at Ellis Park in the summer; if they’re not on, I don’t know what I’ll be doing. Start a job doing grocery runs for people, I guess!

‘The entire industry will take a massive hit.’

Obviously, it’s not just the jockeys, though, because the entire racing industry, like so many others, will take a massive hit. Trainers, for example, are in a challenging position because the racetracks have literally closed and kicked them out, and some have lost all their horses and don’t have a job. It’s had such a huge effect on everyone – assistant trainers, grooms, hotwalkers, exercise riders.

On the breeding side, consigners have taken a huge hit – some sales have gone ahead where horses didn’t make half the price they were supposed to make, while other sales just aren’t happening. Then there are the owners. For a lot of them, it’s their hobby, not their business; they have their business to pay for their horses, so if that’s struggling, then, of course, horse racing will struggle.

If the layoff continues for a long time, it will make me consider my future. The industry will be hit hard, and one thing I’d love to get involved in is the retraining of racehorses, which is such a big thing over here.

I’ve also signed up with a network marketing company with an eye to the future – but I wasn’t planning on stopping riding for a few years yet, and I don’t want to panic too much, although there is so much uncertainty during this crisis.

For me personally, I’m thinking about how I would treat this if I were injured for three months: you manage, and you have to make it work. I’m looking at what I can do in the meantime, and for me, that means getting my house in shape. I’ve owned the house for four years and haven’t even lived in it for 12 months, so now I can finally do the painting and decorating.

I haven’t been out of the house much, and Lexington is pretty quiet. People are going about their business doing what they need to do. When I go to the store, which isn’t often, I’ve got my gloves and a facemask on. None of the cafes or restaurants are open, but you can get takeaway, so it sounds like things are the same as in England.

‘I do miss some things about England.’

I miss some things about England, but I don’t regret moving to the U.S. because of all the success I’ve had. It was very hard, to begin with, being away from my family, home, and friends.

But as the years have gone on, the friends that I’ve made over here have become family, and the support that I’ve had from people has just been incredible. It’s crazy because I rode in England for seven years, and I’ve been here six and a half years now; this is my fifth full season riding.

I admit I do miss riding on those beautiful English racetracks. They’re so interesting, and every day you have to use your brain because they’re different configurations. We have beautiful tracks here, too, but you know you’re gonna keep going left-handed every day!

I know every inch of the Lambourn countryside – I spent all my life riding around there – but in reality, I was never going to get the same sort of opportunities in England that I’ve got over here.

I guess with that in mind; I’m lucky that at least I have Street Band to look forward to. Lots of people don’t even have that at the moment.

Originally published at HorseRacingPlanet.com as told to Nicholas Godfrey. Reprinted with permission.