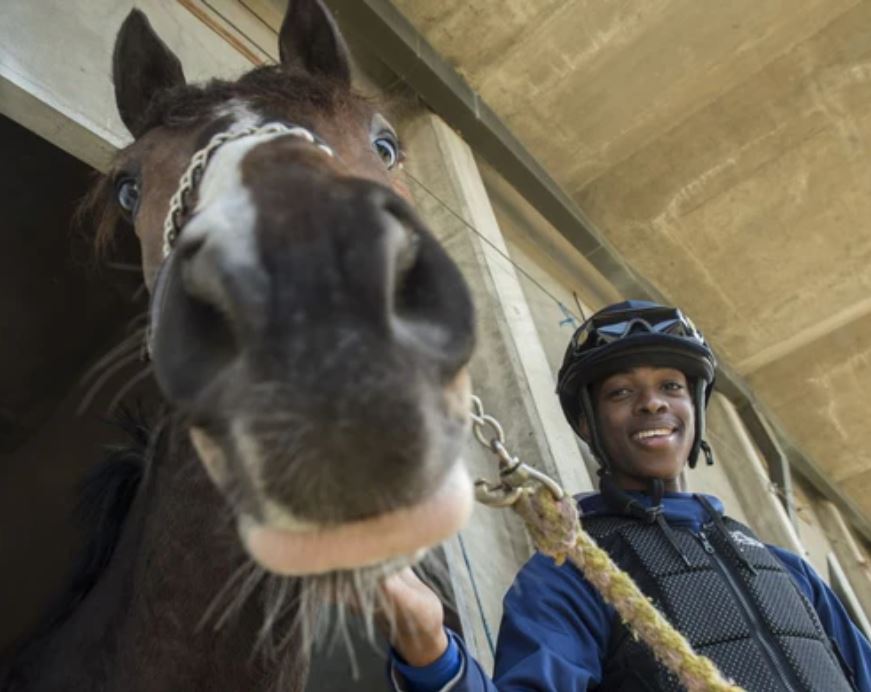 “Yeah, it’s probably not the best combination. But being a jockey is something I always wanted to do.

“When I was just starting, people would ask me if I was crazy,” said Williams, who arrived three years ago — from his home in Barbados — at Northlands Park, where thoroughbred racing opens on Saturday for its final season at the exhibition grounds.

“I remember telling my mother what I wanted to do and she felt the same way. She said, ‘Are you sure this is what you want to do?’”

But Williams has proved just about everyone wrong. He’s not just a jockey he’s a very good jockey winning the Sovereign Award for being Canada’s top apprentice rider last season winning with 41 of just 261 mounts at both Northlands Park and Balzac’s Century Downs.

And when he wasn’t winning, Williams, 19, was almost always right there accumulating 51 seconds and 45 thirds, which means he finished in the top three in more than half of his rides.
Despite his height, Williams weighs just 115 pounds. He’s so skinny that, as former jockey agent Fred Hilts likes to quip: “If he turns sideways he disappears.”“I’m really tall — especially for a jockey. Most riders are about five feet to five feet, four inches. But I’m naturally light,” said Williams, who doesn’t have to diet or melt away the pounds in the hot-box sauna like just about every other rider.Williams says his height is actually an advantage.“I’ve got such long arms that I can really get a good, long push on a horse’s neck and really make the horse stride out.”His allergies, however, are a different matter.

“When I was younger, I was really allergic to horses,” said Williams, who used to have to take antihistamines but doesn’t anymore and who has to wear a lot of clothing around horses to avoid rashes. “My eyes would constantly be running and get so swollen that I could barely see. I sneezed a lot when I was around horses, and I even had trouble breathing a lot of the time. And I was always getting some pretty bad rashes.

“I honestly thought this would kill me but being a jockey was something I always wanted to do. I always loved horse racing.

Being cool and confident on a horse, nothing seems to bother Williams.“He’s a brilliant rider,” said former jockey now-trainer Rick Hedge. “He’s really got a good head on his shoulders. He doesn’t panic if things don’t unfold in a race the way they were supposed to. In last year’s Alberta Fall Classic program, Williams showed just that, in which he rode two stakes winners, including the one mile Alberta Oaks with Piper Rose for trainer R.K. ‘Red’ Smith, an outfit he rode a lot for last year.“Piper Rose likes to come from off the pace, but she broke really slow. She hopped out of the starting gate and got away dead last. After about half a mile, we were about 20 lengths off the pace. I wanted to be a whole lot closer than that.“I didn’t want to panic but I was getting pretty nervous. Even at the head of the stretch, I was still about eight lengths back of the leaders.”But Williams didn’t quit and neither did Piper Rose, who rallied to win by an open length at odds of better than 6-1, which is pretty much par for the course for Williams, who brought home a lot of longshot winners last year.

The other stakes winner Williams rode on the Fall Classic was Mister Jangles, who scored at almost 8-1 in the Red Diamond Express.

“He was on a lot of longshots early in the year, but when he started winning with those kind of horses he started to get some live mounts,” said Williams’ agent, Hugh Huston, a former rider himself who broke his neck in a morning spill in 2009.

“Riding all those longshot winners got him noticed, and he quickly became a preferred rider,” Huston said of his jockey who ended up as the third leading rider at Century Downs — 10 wins behind perennial leading rider Rico Walcott and just one win behind runner-up Keishan Balgobin.“He rides the rail as well as anyone around here, and trainers really like that. He’s also got a good head – he knows what he has underneath him.”Williams first came to Edmonton in the summer of 2015, when he came to see Walcott, Quincy Welch, and Damario Bynoe, who all rode at Northlands Park and who Williams had gotten to know when they rode in Barbados.“There are so many riders in Barbados and so many apprentices that it’s hard to get many mounts,” said Williams. “When I was in Edmonton that year, I got to know trainer Rod Cone. He told me that Northlands needed riders and that I should come here. The next year I did. I’m sure glad I listened to him.”As an enticement to trainers to use them, like all apprentices, Williams got a five-pound weight allowance last two years. But that’s gone this year.

While the transition from an apprentice to a journeyman can be difficult, Cone doesn’t think that will hinder Williams.

“A lot of jockeys go downhill after they lose their bug, but I don’t think it’s going to affect him. He’s too good of a rider,” said Cone. “He doesn’t just sit on a horse; he’s not just a passenger. He moves with the horses. He’s got a real good sense of pace.

“He’s also a real gentleman, very personable, and works hard galloping and working horses in the mornings.“I just think he’s a natural jockey. Horses run for him. Just like Walcott.”STOCK REPORT — Saturday’s post time is 1 p.m. The Kentucky Derby will also be simulcast during the 10-race Northlands race card … Horse Racing Alberta announced Thursday. It had extended the horse-racing license for Northlands Park until the new Century Mile track, located beside the Edmonton International Airport, opens next year. As a result, Northlands will host standardbred racing in the fall.