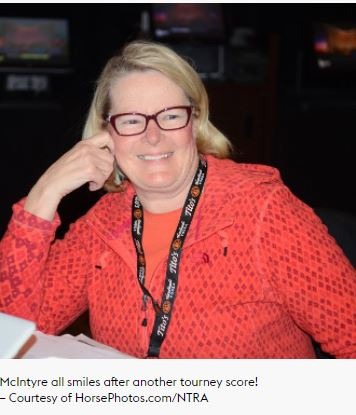 Cheryl McIntyre on winning at Woodbine

TORONTO, April 28 – Take a passion for horse racing, unabashed enthusiasm for contest play, a love of travel, and the time and means to engage in all of the above, and what do you have? You have the 2016 NHC Tour Champion Cheryl McIntyre.

A 66-year-old tire industry retiree from Massillon, Ohio, McIntyre hit the road—and her laptop computer—to participate in some 200 live and online competitions last year. Her prolific play led to two NHC seats, an incredible five Breeders’ Cup Betting Challenge entries, and earnings of approximately $145,000—including $95,000 in bonuses for her exploits as the top points-earner 2016 NHC Tour season.

“That wasn’t all profit,” Cheryl was quick to point out with a chuckle. “We spent a lot in entry fees and travel, but it was still a great year.”

Indeed, it was easily the best year of her tournament career, which began eight years ago and has seen her participate in the last eight NHCs as well as five editions of the BCBC. She estimates she has won roughly 100 tournaments in all (counting online events) and earned a total of about $250,000 (U.S.).

McIntyre is well known in tournament circles not just for her frequent play but for her traveling “team” that includes husband Mike, brother-in-law Robert, son Kevin, Kevin’s girlfriend Jill, and friend Gary Johnson, who recently returned to the training ranks on the Ohio circuit.

“At the beginning of last year, our only goal was to earn as many BCBC entries as possible so that we could all go there as a family,” Cheryl explained. “Other than that, we just do what we want to do as long as we have the time to do it.”

Early on in 2016, though, McIntyre had no idea she’d be playing as much as she eventually did. “In the first half, I did well in a tournament at Laurel and got myself up high on the NHC Tour leaderboard. Then in the second half, I did well at Saratoga and earned a lot more tour points. After a good finish at Woodbine, my husband Mike studied the standings and realized that I could finish first and win the $75,000 overall top prize with one or two more wins. From the Breeders’ Cup on, I basically played everything.”

Her extensive tournament travels have taken her from Laurel to Lone Star to Los Alamitos and a host of places in between. But one of her favorite stops—not just in 2016, but every year—is Woodbine, where she hopes to play in all four big tournaments this year (June 24, July 29, August 26-27, September 16). Yes, she thinks Woodbine is beautiful and that the people there are great—and it’s not a bad drive from Ohio. But for Cheryl, her fondness for Woodbine goes deeper than convenience and mere niceties.

“For years and years—before I was ever playing tournaments—we would go to the races or simulcasts at Thistledown or Northfield on weekends. My favorite track to play was always Woodbine. I got used to synthetic and turf racing and familiarized myself with how the jockeys rode the various surfaces and distances, which helped my game a lot. Now, whenever I play a tournament, I always hope that Woodbine is being used as a contest track.”

And that comfortable feel that Woodbine affords Cheryl is doubly important to her given that she is not one to bury her head in past performances for hours in advance.

“There are many ways to approach the game,” she said. “Plenty of people study the races days ahead of time, which is great…but that’s not me. I never look at anything until I get to the track. I prefer to go race-to-race, and what I do will depend a lot on the format of a given contest. I do like turf races, though. In a live, multi-track contest, the first thing I do is to look at the cards and see how many turf races are being run at each track. The tracks with turf races are probably where I will concentrate most. If it rains, I’m done! I’m not good in mud—it’s not that I’m a bad mudder, but the absence of grass takes away one thing I feel I’m good at. One year at the NHC, with eight tracks going, there was rain all around the country, and everyone was off the turf. When that happens, I lose my edge.”

Cheryl is not fussy about distance when it comes to her beloved turf races, but she is pretty particular about everything else.

“In general, I like maiden grass races because they can have a lot of value, and I really like grass races with a prohibitive favorite. Often, I’ll study a grass favorite’s breeding or trainer or jockey and find something that looks not quite right. That’s where I have had success in the past.”

Another thing Cheryl has become very adaptable at is multitasking—namely, at competing in online tournaments while playing at a live, onsite event.

“It’s not easy,” she said. “You can have too much on your plate, but you have to stay focused. It’s become easier for me only because I have done it so many times. Often the online contests have totally different tracks, which makes it harder. You have to concentrate. It’s not a time to be socializing.”

But when the work is done, the McIntyre family enjoys the social aspect of tournament play. “We’ve made some really great friends,” Cheryl said. “When we first got started, some people didn’t seem to know what to make of us. We were seen as the group that just played a lot of entries. But as we got to meet and know people, everything changed. Suddenly, people would be rooting for me and would be excited when I was up there in the standings. It’s a terrific feeling and a great part of tournament play.”

Don’t let appearances fool you, though. When the competition is on, Cheryl has a competitive streak that often belies her calm demeanor.

“If I get beat at the wire, I have been known to make some…cursing mistakes,” she said, laughing.

A more serious peeve for Cheryl is when she is confronted—in person or, more often, online—by those who see her success and assume that, because she is a woman, she is not a serious handicapper or someone else is making her picks for her.

“If you think you can beat me, prove it. Play against me. And if you think I’m not making my own picks—sorry, but I am!”

Cheryl is proud of her tournament accomplishments and especially so as a woman in a male-dominated pursuit. “I love that I was the only woman in the top 10 of the NHC Tour,” she said. “This year, Sarah Wiener is at the top of the Tour standings, and I think that’s great. I wish more women would get involved. I think a lot of them would do better than they think. I encourage men to get their wives and daughters involved—I think they’d have even more fun. There are more women than ever playing in the NHC, and so many successful husband and wife couples are doing well and having a great time together. You can always play small…play online…until you gain your confidence. You might be a good contest handicapper and not even know it!”

A lot of top tournament players didn’t know that about Cheryl McIntyre at this time last year. They do now.