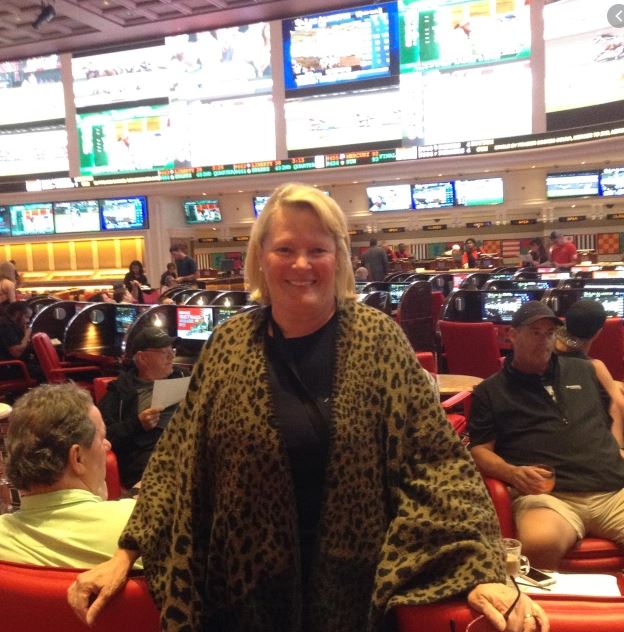 By accruing the most points from her top six horse-racing tournament finishes during the 2016 season, McIntyre will earn a $2 million bonus and be feted as the 2017 Eclipse Award champion horseplayer if she also wins the Jan. 27-29 National Handicapping Championship at Treasure Island Las Vegas. With her husband, fellow NHC qualifier Mike McIntyre, she participates in more than 200 competitions a year, both online and live.

McIntyre, who has the maximum of two seats at the NHC, spoke with veteran turf journalist Jennie Rees before heading to Las Vegas. Also having qualified for the $2.5 million NHC, which offers first-place money of $800,000, are the McIntyres’ son, Kevin, and his fiancée, Jill Himes, along with Mike’s brother Robert.

“Mike and I will be celebrating 47 years of marriage in March. When our kids were little, we used to go down to Mountaineer and spend our summer vacation there. We had a group of people who converged on Mountaineer Park for a week. The kids played, swam during the day, and we went to the races at night. Back in those days, I’d bet maybe on physicality, how they looked, or a certain name…. I don’t even remember what year it was, but we had a friend who said, ‘They have this competition and contests. Might be something you guys would be interested in.’ It snowballed from there. We enjoyed it, and it was fun. Then we started going out to Horse Player World Series at the Orleans, and then we really got serious about it and started following the Tour. And we went on from there.”

When did you go from betting on looks and names to serious handicapping?
“Once you got into the contest mode, you had to. I got really good at reading the Racing Form. Mike was already good at that, and I just decided, ‘I’m not going to sit back and watch the rest of these guys do this. I’m going to learn how to do it myself.’ Then I got involved with pedigree, bought some publications. We started using a tool called Running Style-Position that we get from Handicapper’s Data Warehouse in Lexington. I have two or three things I look at pretty much all the time. I’m what they call a grinder. I grind it out. I pick a big-price horse when I need one, but most of the time, I’m a 7-2, 5-1, 8-1, that kind of thing. I don’t go for the big ‘cap’ horses unless I feel they have a legitimate shot.”

With all these handicappers in your family, who’s the best?

“Right now, me! No, I really consider Mike to be the best. He gets a lot of bad beats, for some reason. He played in a contest online (Sunday) and had five horses that ran second. If any of them win, he wins.”

What about being the first female to win the Tour?

“I’d have to say that’s pretty special. I see more women all the time. But early on, back when we were going to the Horse Player World Series, there weren’t very many women, and the women who did go were more or less going along with their husband or brother and didn’t really play that much. But I see more women getting involved. We’ve met an awful lot of couples with whom we’ve become good friends…. Everybody kind of roots for everybody else. It depends who’s on top of the leader board.”

Is there a way you’ll prepare for the NHC?

“No. That’s not me. Some guys will sit and look at Racing Form for two days once they know the mandatory races. I don’t study until I get there. Mike and I, we get there, we open the Racing Form, look at what we have to do, and we start, but not maybe other than a couple of hours ahead of time.”

Do you think in terms of just making it to the Final Table and taking your chances or each day, do you try to pick the most winners and let the rest take care of themselves?

“Take care of itself. First of all, they wouldn’t put the bonus up that high if it was something easy. For the Tour, there were — what? — a couple of thousand people? For the actual NHC, it might be 600 700 entries. I’ll do my thing like I always do. Look for winners, and if it works out fine, great. It will be wonderful.”

What would you tell other women to get them involved?

“I really feel there’s an opportunity there for a lot of women. I’d like to see more women get involved. There isn’t any reason why they can’t. It’s not strictly a male industry. A lot of women aren’t really familiar with the whole concept of tournament playing. It comes from word of mouth and passing along information…. Often, the male influence is intimidating to them, and it’s not to me. I can pick them just as well as you can. You’re on the same playing field when you start as anybody else.”

If more women got into it, do you think they’d say, “Hey, this is great”?

“Oh, sure. Any casino you go to, there are just as many women playing slots machines as men. Or craps or poker. It’s just something a lot of women don’t know about.”