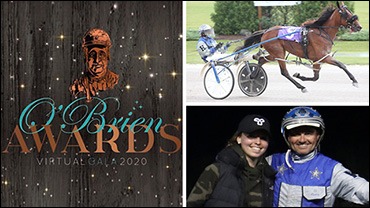 Good friends and a strong operation gave the team of Ed and Ashleigh Hensley an opportunity to present themselves on the nation’s highest stage and earn their first shot at one of the country’s top racing honours.

Husband Ed, a California kid who has held tack at racetracks all across North America; and wife Ashleigh, a native of Manitoba and sister to Travis Cullen, have managed the Hensley operation on both sides of the border for nearly the last decade. Nowadays the two are the sole workers in their operation, with the barn overseen by Ashleigh and Ed doing any other work needed.

Ed’s travels through the years brought him to build relationships with Mark Weaver and Ron Burke, which gave them an opportunity amid a global pandemic to help the longtime family friends.

“It was a really exciting day when Ron Burke called Ed,” Ashleigh told Trot Insider. “Ed and Ron have had horses together before…they’ve trained horses for each other over the last few years, so they have a good relationship. Ed and I were actually down on numbers. We usually have 10 or 11 of our own, and our barn holds 11 stalls. So usually we don’t train for other people, we just train our own. But because of the pandemic, we were down on horses, and we could use the extra horses. They told us that they were sending three nice babies up, so we couldn’t turn that down. Then it turned out we had a really great year with all three of them, but especially Scarlett Hanover.”

Scarlett Hanover arrived at the Hensleys in late summer and was placed under their management due in part to travel restrictions which made cross-border travel more cumbersome and time-consuming than normal. Rookie pacing filly Scarlett Hanover began to show her colours quickly, finishing fourth and second respectively in Gold preliminaries before sweeping the Battle of the Belles and establishing herself as a top-class freshman filly in Ontario.

As stakes season rolled, Scarlett Hanover dipped her hooves into Grand Circuit company. She finished second in a $75,000 Eternal Camnation division, went back to Ontario Sires Stakes competition, and won a Gold prelim by five lengths, then scored a four-and-a-half length victory in an $86,664 Champlain division. These races set her up for the Shes A Great Lady, in which she won an elimination but tight quarters off an attempted pocket pop in the stretch of the $455,000 final prompted her first-place finish to be overturned into a ninth-place disqualification.

“That was just bad luck and very unfortunate the way it happened, but that’s part of racing,” Ashleigh Hensley said. “We felt bad because Andy McCarthy was feeling really bad, but we said ‘You know what, that’s just part of racing.’ We’ve had it happened to us just in overnight racing, but then with that…it hits you a little harder, but there’s nothing you can do because it’s already done.”

Scarlett Hanover and Team Hensley rebounded from the disqualification gracefully. A strong season in the Ontario Sires Stakes made her eligible for the $250,000 Super Final, in which she sped to the lead through a:26.3 first quarter, lost the lead, and came attacking first over in the final turn in a two-move head decision with Ed Hensley in the sulky to wrap her Canadian season.

“The Battle of the Belles was exciting for sure,” Ashleigh Hensley said, “but that Super Final was definitely the highlight for us.”

Following the Super Final, the Hensleys said goodbye to Scarlett Hanover and sent her stateside back into the care of Ron Burke, where she ended the year with a third-place finish in the $600,000 Breeders Crown final and, ultimately, an O’Brien nomination for Two-Year-Old Pacing Filly of the Year.

“For Ed and I, we run a different operation than most trainers here,” said Ashleigh. “We don’t have anybody who works for us, it’s just him and I. So we’ve got a small stable, so the horses that we have…they become part of our family and we get pretty attached to them. So we were really sad to see them leave when they did leave, and we will definitely welcome them back if they had to send them up to us.

“We weren’t shocked; we figured she would [be nominated], but I just wasn’t sure because she got disqualified in the Shes A Great Lady,” Hensley said of the nomination. “So I wasn’t sure if she’d have it wrapped up or not. But she should definitely be good competition for the other filly there.”

“They were sending up all their stakes horses and they were stabling them at our farm for the weekends, and Ed and I raced all of them for them,” noted Ashleigh. “That was pretty exciting. We had Atlanta and Warrawee Ubeaut and Dorsoduro Hanover…all of those horses stabled at our farm every weekend. It was a lot of stress because we had to ship them in for Lasix and make sure they got raced and everything went well. So not only did we have the babies for them, but we also had all these really good racehorses here.”

Ashleigh gives a lot of credit for Scarlett Hanover’s success to the Burke Brigade but also attributes their success to her husband Ed.

“Ron did a really good job breaking these babies and also training them down,” stated Ashleigh. “When we got them, they were very well mannered. Their very first start at the track, they knew what they were doing, you know? It was just like racing an aged horse, so that made our job easy.

“But also I would say, the success for us here…a lot of it is my husband,” Ashleigh continued. “He did all the trackwork with the babies, he did all the shoeing. I think it’s a big advantage to have somebody driving your horses like he did most of the driving. Obviously, Yannick came and then Andy [McCarthy] drove her, but Ed did a majority of the driving through the season and I think that’s a big advantage because he knows her ins and outs.”

In a non-pandemic year, the 2020 O’Brien Awards would have been the first time Ashleigh Hensley ever attended the event, though she could not go in 2013 when brother Travis Cullen was nominated for and won the Future Star Award. Instead, the Hensleys join many others attending the event virtually.

“We’re going to watch from home, and they offered those VIP packages from Standardbred Canada…so we ordered that. Rachel Andrew [Travis Cullen’s girlfriend] is also nominated for an O’Brien Award, so we’re just going to celebrate here with them because we all live on the farm.”