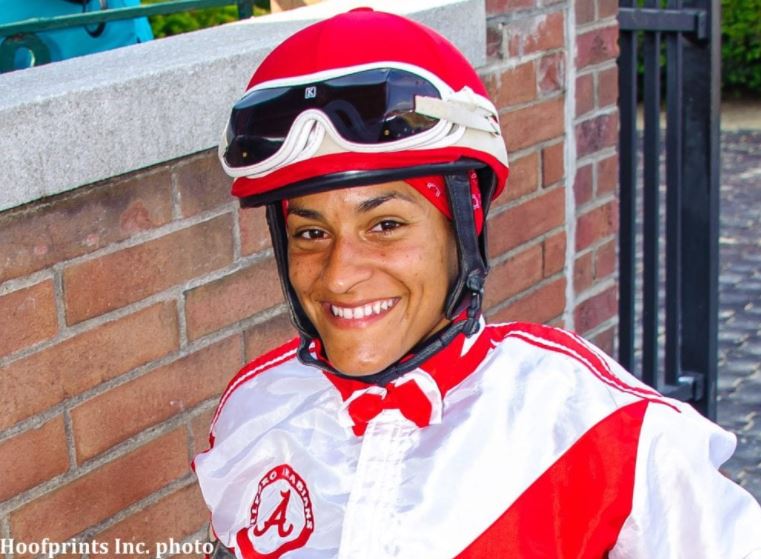 Carol Cedeno broke the Delaware Park record for the number of wins in a day and was voted Jockeys’ Guild Foundation Detox Jockey of the Week for July 9 – 15, 2018. A panel of experts voted on the award for riding accomplishments by members of the Jockeys’ Guild, representing more than 950 riders in North America. Jockey of the Week is sponsored by FoundationDetox.com, America’s #1 Equine Toxin Remover.

Cedeno won six Thoroughbred races on Delaware’s Wednesday card, then returned for her seventh victory of the day in the final, an event for Arabians. The seventh win was a first for any rider at Delaware, though six other riders have notched six-win days.

Cedeno‘s six Thoroughbred wins were by a combined 11 lengths, and just two were post-time favorites. The six wins included four consecutive wins in starting the card. She was on a heavy favorite in the Arabian race, winning by nine lengths.

The three-time leading rider at Delaware is on track to earn yet another riding title, leading the current meet with 31 wins in 139 starts. She has finished in the money on over half of her starts at the 2018 meet.

Cedeno was the leading rider last week by the number of wins and had nine Thoroughbred wins in 25 starts, for a win rate of 36%. She finished in the money on 56% of her mounts.

The native of Puerto Rico landed at number 31 in the top earnings for the week, and she rode in and won races at two tracks: Delaware and Laurel.