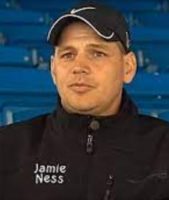 Wilmington, Del., May 12, 2021—When the 84th live racing season begins on May 26th at Delaware Park, defending leading trainer Jamie Ness will be attempting to write another exciting chapter in track history.

The 46-year-old native of Heron, South Dakota, will be seeking his seventh straight leading trainer title, which would equal Hall of Fame trainer Grover “Buddy” Delp’s record and was equaled later by Scott Lake. Ness is humbled and honored to be mentioned in the same breath with a pair of Delaware Park legends.

“Absolutely,” said Jamie Ness, who has been leading trainer at Delaware Park since 2015 and finished the 2017 season tied with Scott Lake. “Delp was before me, but if you even spend a little time at Delaware Park, you know that is a name you respect. He is a legend. Scott (Lake) is somewhat a mentor of mine, and it is always nice to be mentioned in the same category as him. To even be in a position to accomplish something those two have done is an honor, and to have an opportunity to accomplish it at a track you consider home makes it even more special.”

Since 2012, Ness has been the leading trainer at Delaware Park every season, with the only exception being when he finished third in the standings in 2014. Last season, he saddled 52 winners on his way to his eighth overall title. In the history of Delaware Park, only two trainers have won more or as many —Grover “Buddy” Delp and Scott Lake. Delp won a total of 11, with seven straight from 1963 through 1969. Lake has won a total of eight, with seven straight from 2002 through 2008.

Ness knows this might be the toughest year yet for him to notch another leading trainer title.

“This is going to be a tough meet,” Ness said from his barn. “This could be the toughest meet since I have been coming here. It looks like there are many new and familiar stables targeting Delaware Park this year, and many of those are not coming to be second best at anything. But, I like it. Competition only makes you and the track better. When the track has large and competitive fields, it is better for everybody involved, and I am looking forward to the challenge. I am really looking forward to this meet. It should be fun and exciting.”

Ness expects to have approximately 55 horses at the Stanton-oval while maintaining his typical full complement at his two other mainstay tracks – Laurel and Parx. He always looks forward to the new season at Delaware Park.

“Obviously, we have horses at Parx and Laurel year-round, but this track is home to me,” he said. “It is just nice to be able to come to the barn and not have to drive far to go home to be with family. My staff likes it here, and it is so horse-friendly. Everybody likes to be home, and I like it when the horses are at Delaware Park.”