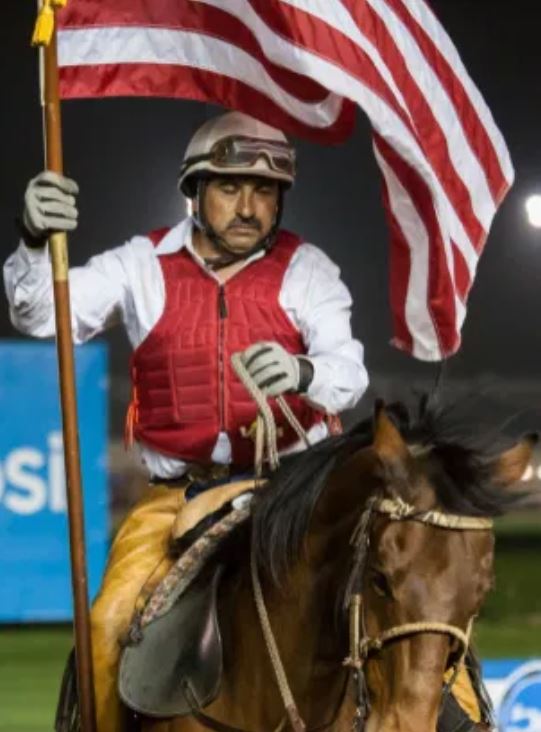 Gomez, 58, grew up on his family’s farm in Mexico, producing corn and beans and having lots of animals.

Gomez and his thoroughbred Red River are also known for performing a routine on the track following the seventh race, with God Bless America playing on the loudspeaker. Lisa Photo | Pompeo Gomez became the Meadowlands’ outrider in 2012.

“I was 11 years old when my daddy taught me how to plow the field. First with bulls and then with horses,” said Gomez. “With the bulls, we had no reins, no nothing. It was just by your voice.”

At 18, Gomez got a job at a factory in the city where he stayed for a couple of years because he needed the money, but he never enjoyed it because he wanted to be outside.

“We were always outdoors people,” said Gomez. “We only were indoors for school. I think growing up there was one of the best times because you were always busy doing something.”

Gomez came to the United States in 1986 wanting to work with horses, and he finally was able to four years later in Ocala, FL, with thoroughbreds.

He continues to work with the thoroughbreds 30 years later as an exercise rider and a pony rider at Monmouth Park in New Jersey. He even owns a couple of thoroughbreds with his brother, Aurelio.

In fact, the first time he worked at The Meadowlands was in 2000 as a pony rider for the thoroughbreds.

In 2012, while exercising thoroughbreds with Beth Cumberland, the outrider at Freehold Raceway, he found out that The Meadowlands was hiring. Gomez also spoke with Jack Folke, who had previously been The Meadowlands’ outrider for many years.

“I talked to them, and they said [The Meadowlands] is looking for an outsider, and they gave me a number for Mr. Peter Koch, who was the race secretary back then,” said Gomez.

Koch remembers getting a recommendation for Gomez from Debra Andrews, the retiring Meadowlands marshall.

“I’ll tell you one thing, it was a seamless transition for him,” said Koch. “He picked it up right away. And all I’ve ever heard is positive feedback about him. I don’t think he had ever worked with harness horses before he came up there, and he caught on great. I know the horsemen think a lot of him. He’s 100 percent reliable, and he’s probably one of the nicest people you’d meet. The guy is always upbeat.

“I would classify him as an ideal employee because you never have to worry, he’s always going to be there, and he does a great job. That, to me, is the best employee you could have.”

Gomez now spends almost all of his time with horses. His typical routine has him up at 4 a.m. taking care of his own horses before 7:30 when he does exercise riding for trainer Holly Harris, among others.

He’s at Monmouth – near his Long Branch home – in the afternoon as a thoroughbred pony rider before making the drive north to The Meadowlands on nights that they race.

“I ponied for three Haskell winners before I started working at The Meadowlands,” he said.

Most followers of The Big M will see Gomez regularly holding onto a horse right before starting a race.

“A lot of the time, a horse just doesn’t want to turn to go the other way on the track, so we just need Pompeo there to help us make the horse do what it’s supposed to do,” said driver Andy McCarthy. “A big reason you need [an outrider] is if there is an accident, well then, they can go and scoop up a loose horse. He’s very good at it as well. He’s a great outrider.”

Gomez works as a team with his retired thoroughbred that he named Red River.

“He’s 16 years old, and I got him when he was 5,” said Gomez. “I feel blessed because, at The Meadowlands, we don’t have many issues with loose horses.”

Meadowlands’ chief operating officer and general manager, Jason Settlemoir, appreciate the work Gomez does on track and the positive attitude he has while doing it.

“He’s fantastic,” said Settlemoir. “He’s great out there on the racetrack, making sure the horsemen and horses are safe and feel comfortable. If you’ve got a rank horse or something like that, Pompeo is always right there. And he’s always helping out with equipment on the track. He’s very versatile as an outsider, and I appreciate all of his work out there because he is excellent. That’s for certain. He’s always nice to deal with, and he’s always smiling no matter what. It can be pouring down rain, and he’s out there doing ‘God Bless America,’ and he’s still got a smile on his face.”

Gomez and Red River are also known for performing a routine on the track following the seventh race, with God Bless America playing on the loudspeaker.

The idea for the performance came from Big M chairman and chief executive officer, Jeff Gural.

In Kentucky for the meet at The Red Mile some time ago, Gural went to the Kentucky Horse Park and watched the parade of breeds.

“My recollection is they started with having one of the riders carry the flag, and they played one of the patriotic songs, and I thought it was a great idea,” said Gural. “We started doing it at Tioga and Vernon [in 2006], and it was well-received up there. So, I thought I would try it at The Meadowlands [in 2012], and to my surprise, to a certain extent, it worked. I think people appreciate it and stand for the most part.

Over the past year, with the pandemic and few or sometimes no fans in the stands, Gomez and Red River have not performed, with the one exception being on Friday, Sept. 11, 2020.

But, with restrictions being lifted in New Jersey, Gomez was scheduled to return to action after the seventh race tonight (May 28). Still, a predicted thunderstorm may postpone his return until Saturday.

No matter the conditions, when you see Gomez at The Meadowlands, he looks at home, which makes sense when you consider that his brother, Ausencio, a former groom and exercise rider, is now a blacksmith. And his brothers, Jesus and Aurelio, are exercise riders who ride pony horses in the afternoon. Obviously, it’s in his blood.

“I enjoy my life working with the horses, that’s all I can say,” said Gomez.