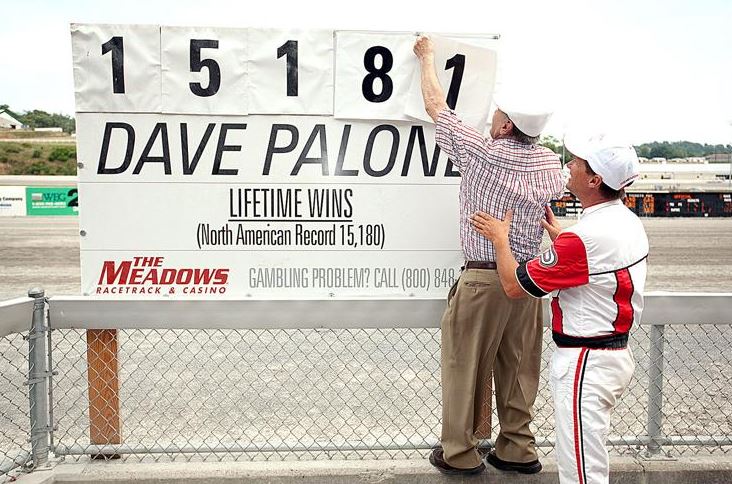 Today’s edition of “When Sports Were Played” is the first from harness racing and The Meadows. We go back to July 5, 2012, when Dave Palone, driving Herculotte Hanover to victory, broke the North American wins record held by Herve Filion, who was in attendance.

Dave Palone drove into harness racing history Thursday afternoon at The Meadows with a smile on his face, a legend watching his every move, and a horse who had never won before.

Just like an ultimate race should unfold, Palone, a Rices Landing native, made the move on Herve Filion’s North American career victory record in the eighth of a 16-race card; passed him with a strong performance from Herculotte Hanover, a 2-year-old filly who had never competed in a pari-mutuel race before; and stood in the winner’s circle to accept his hard-earned position as the sport’s most successful driver.

It was the 15,181st career win for the 50-year-old Palone in an illustrious career that was punctuated by win No. 1, when he drove Reds Folly in first in 1983. His career has been going strong for nearly 30 years.

“It’s such a relief,” said Palone. “It was such an honor to have Herve here. There is no replacing Herve. In soccer, you say Pele. In harness racing, you say Herve.”

In a show of respect and admiration, about a dozen drivers ran in from the far-side paddock to congratulate Palone.

“That was a surprise and a shock,” he said. “Anyone of those guys could be standing next to Herve today. Not only are they great drivers, but they are great guys, too.”

Palone entered the week needing 10 victories to break the record. He got two on Monday and six more Tuesday.

“To do this at home means so much to me,” said Palone. “I really wanted to get it done at The Meadows. It is the greatest moment of my career, no question. There are so many people who are a part of this. I look at the crowd and I see so many faces. Everyone had a part in this. I can’t say thank you to all of them now, but I will later.”

Filion has been the career victory leader since 1971 at age 31.

“I feel good about it,” said Filion. “People told me that the record would never be broken. I knew Dave would get there one day. He always had ambition. He was always there to drive. He’s a good guy and a good driver. He’ll be a good ambassador for harness racing.”

Herculotte Hanover was a $40,000 yearling purchase and the foal of Her Culese, who was the 2005 champion in the Kentucky Filly Futurity and World Filly Trotting Derby. She crossed in 2:00.1 for owner Ed Mullinax, who owns a car dealership in Northeast Ohio.

The two teamed up when Palone drove P-Forty Seven to a victory in the Little Brown Jug in 2005.

“You never know what to expect with a first-time trotter,” said Palone. “There were a thousand things going through my head. I thought, ‘This is actually going to happen.’ This was the last horse on the card that I thought I could count on because he was making his first start.”

Palone tied the record in the third race with Well Al B, a 5-year-old pacing gelding from the Burke Stables who crossed in 1:52.2.

He would add three more victories on the day and finish with 15,184 career wins.

The Meadows delayed the race card in order to have the ceremonies in front of a few hundred people who had gathered at the winner’s circle. Most joined Palone for a group photo at the end.

“He was mostly relaxed today,” said Palone’s wife, Bethann. “He just didn’t want to let anyone down. We weren’t sure about the race card, but he got it done. We’ll get away but it’s too hard to do it in the summer. We’ll take the kids to Disney World and that’s how we’ll celebrate.”

The Meadows made Thursday, July 26 Dave Palone Night at the track. A bronze bust will be presented to him in a ceremony.

“I don’t want to think about numbers ever again,” Palone joked. “Someday, my numbers will be beat. That will be great because it means harness racing is doing great.”