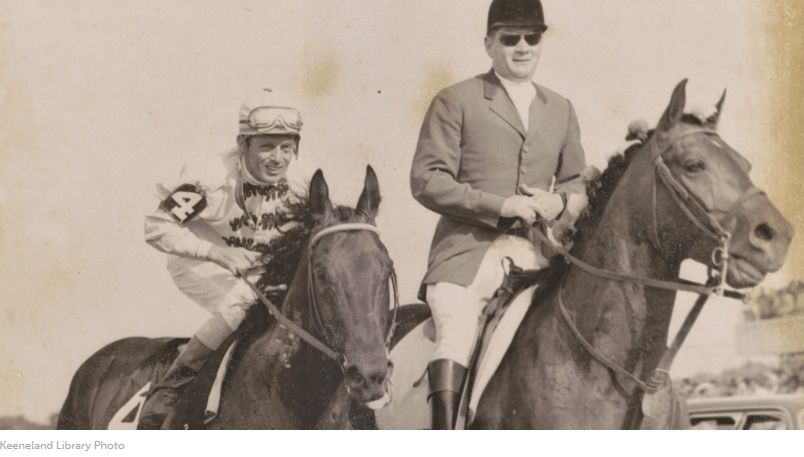 Much has changed in a half century at Belmont Park, from the amount of real-time information available digitally to increased purse money to the way most fans place wagers.

But the draw of a potential Triple Crown holds the same appeal as it did in 1971, when a then-record crowd of 81,036 came out to Elmont to witness Venezuelan champion Canonero II’s quest to add the third jewel of the 3-year-old season to his collection in the Belmont Stakes.

But New York City native and jockey Walter Blum thwarted Canonero II’s chance at becoming just the ninth Triple Crown winner in history at the time, guiding 34-1 longshot Pass Catcher to a three-quarters of a length win in the Belmont. Reflecting on the 50-year anniversary from his home in Florida, Blum said he is proud for earning his lone victory in an American Classic in a Hall of Fame career. Despite five decades flashing by, Blum said he still remembers feeling better about Pass Catcher’s chances than the betting public did leading up to post time.

“When I walked out on the track, I felt confident,” Blum said.

A large portion of the crowd arrived at Belmont to cheer on the Edgar Caibett-owned Canonero II, who was bidding to be the first Triple Crown winner since Citation in 1948.

Canonero II, trained by Juan Arias and ridden by Gustavo Avila, rallied from 18th place to post a 3 3/4-length win over Jim French to win the Kentucky Derby, paying $19.40. In the Preakness, Canonero II was more forwardly placed and won again, defeating Eastern Fleet with Jim French in third to set up a potential history-making moment in the 1 1/2-mile “Test of the Champion.”

Pass Catcher readied for that test by being placed on trainer Eddie Yowell’s self-professed “five-day plan,” where he ran second to Bold Reasoning in the Jersey Derby on May 31 at Garden State Park before wheeling right back to the Belmont on June 5. After winning two of his five races to start his 3-year-old campaign entering the Belmont, Blum said the effort in the 1 1/8-mile Jersey Derby gave him plenty of confidence when competing on a bigger stage.

“He ran a week before at Garden State Park and after the race, he came back so strong. I could see at the finish line he was just starting to run; another three jumps he was going to win,” Blum said. “I told everybody I knew that I was riding this horse in the Belmont who is a longshot, but I think he’s going to win. I really liked his chances and sure enough, he won at 34-1 and won convincingly. It was a great time in my life.”

The popular Canonero II drew a large crowd from the area, who came out to view a colt who would go on to the Eclipse Award for Outstanding 3-Year-Old Male Horse. Instead, Pass Catcher stalked Canonero II’s early speed before overtaking the leader when the field reached the top of the stretch.

Blum said he was pleased with his effort but took no extra joy in playing spoiler to the heavy favorite.

“I was proud of myself in that I thought he would win and he ran as well as he did, but I wasn’t proud of the fact that Canonero got beat for a Triple Crown,” Blum said. “That didn’t mean much. I felt good about winning but I felt bad about him losing. They were all there to see Canonero and if I didn’t win, I would have liked to have seen him win, too.”

Tackling the two wide turns on Belmont’s Big Sandy, along with the marathon distance, are the signatures of the Belmont Stakes, though the race’s unique circumstances set up well for Pass Catcher that day.

“It’ not like any other race,” Blum said. “In this country, mile-and-a-half races are few and far between. But I was looking forward to a mile and a half with that horse because I knew he would rate easily and when I wanted to pull the trigger, he would fire, and that’s exactly what happened.”

Cordero, Jr., who won three editions of the Kentucky Derby, tallied two Preakness wins and won the 1976 Belmont aboard Bold Forbes, said he wasn’t confident initially that Pass Catcher would relish the distance.

“I didn’t think he (Pass Catcher) wanted to go that far,” Cordero, Jr. said. “On paper, that was a little too fast for him – 2- and 3-year-olds can do things better than when they’re older – and sometimes they don’t want to go that far but they do. You get horses that outrun their pedigree.”

Cordero, Jr. said Canonero II’s training regimen and previous accomplishments garnered the most attention leading into the Belmont, but added that Pass Catcher deserved the victory despite sending a vast majority of the crowd home disappointed.

“Pass Catcher was a real good horse. But that year, Canonero was probably the best horse … he trained at high altitude,” Cordero, Jr. said. “I didn’t win it, but I always enjoyed being in those big races and knowing I had a chance. Every time you run in a race like that, and there’s a real good horse that beats you, it’s not like you’re jealous. Every time you run a race like that and actually beat the big horses, it’s like beating Muhammad Ali.”

Blum stopped riding in 1975, embarking on a 24-year career as a racing official and steward in New Jersey and Florida. He amassed 4,382 career victories in 28,673 starts, with only Hall of Famers Bill Shoemaker, Johnny Longden, Eddie Arcaro and Steve Brooks ahead of him on the all-time list for jockeys at the time of his retirement.

Blum said he did not view his lack of a victory in an American Classic to that point as a box waiting to be checked off, having established a reputation as one of the best riders in the sport by winning prestigious races such as the Whitney, Santa Anita Derby, Coaching Club American Oaks, and twice capturing the Metropolitan Handicap and the Frizette.

“It certainly didn’t hurt getting to the Hall of Fame, but I think my career in general and my comradery with the people involved in the industry helped me get in,” said Blum, who led all North American jockeys in wins in 1963 and 1964 and was inducted in 1987. “Most of my career was behind me, and I had done almost everything I wanted to do, so it didn’t do much as far as furthering my career, but I was just glad to win that race at that time.

“Everyone wants to win the Kentucky Derby, but I’ll take the Belmont any time,” Blum said with a laugh.

Blum, now 86, grew up in Flatbush, Brooklyn, and attended Samuel J. Tilden High School. On July 29, 1953, at the age of 18, he won his first race at the now defunct Jamaica Race Course just 10 miles away from home, guiding a 36-1 longshot filly named Tusciana to a victory for Hall of Fame trainer Hirsch Jacobs.

Blum, who now lives less than a mile from Gulfstream Park, said he still follows racing and praised the competitive jockey colony in New York, where brothers Jose and Irad Ortiz, Jr. continue to reside at the top of the standings in a circuit that also counts Hall of Famers John Velazquez and Javier Castellano as regulars.

Blum’s empathy for jockeys is something not every trainer shared during his career, though his success with Yowell partnered him with a conditioner who started his career as a rider. Yowell had trained a previous Belmont winner prior to Pass Catcher, with Hail To All winning the 1965 edition as well as that year’s Jersey Derby and the Travers at Saratoga Race Course.

“Some of the trainers, I don’t know if they could picture what a jockey’s life was like with dieting all the time, keeping the weight down,” Blum said. “Living this kind of life is very difficult, in addition to the problems that can arise from the challenges of running a race. But when we’re in the paddock, we’re both thinking about the same thing as far as winning the race.”

While his win aboard Pass Catcher is near the top of his career ledger, Blum raced against some of the most notable names in the sport’s history, including beating Hall of Famer Kelso while aboard fellow Hall of Famer Gun Bow in a photo finish victory in the 1964 Woodward. The next year, Blum piloted Priceless Gem to a win over Hall of Famer Buckpasser in the Futurity.

Blum even was part of history-making events that didn’t result in winner’s circle trips but still factored into the sport’s lore. In 1973, he rode Royal and Regal in the Kentucky Derby that spring-boarded Secretariat’s famed Triple Crown run.

“I was on a horse who had just won the Florida Derby, so I thought he had a shot,” Blum said. “I wasn’t really that much aware of Secretariat at the time until he flew by me at the top of the stretch. He ran by me like a shot and I said, ‘who the hell is that?’”

Blum, who twice rode six winners on a single card, stayed in racing upon the end of his riding career, first serving as an association steward at Atlantic City Race Course before becoming a state steward in Florida.

“I loved being a jockey but you can’t do that forever,” Blum said. “I enjoyed being an official almost as much as riding. The people riding under me, I knew their problems and I knew them [as people]. They respected me for what I knew and how I acted. That’s why I became a steward; I always respected the stewards I rode under and I always knew that it was something I wanted to do when I stopped riding. That helped me retire and it was one of the best things I ever did. I left with a good reputation as a jockey and a steward, and I’m very proud of both.”