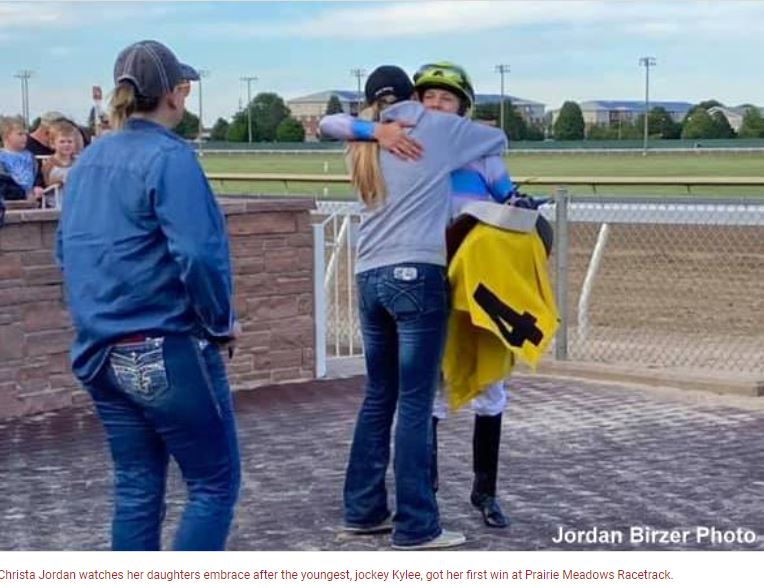 Christa Jordan watches her daughters embrace after the youngest, jockey Kylee, got her first win at Prairie Meadows Racetrack.

When 19-year-old bug rider Kylee Jordan won her first race at her home track on May 29, her older sister, 21-year-old Taelyn, was the first to congratulate her with a giant hug in the Prairie Meadows winner’s circle.

The moment brought tears to the eyes of family matriarch Christa, who said watching her daughters’ close relationship and unwavering support of one another is the greatest feeling in the world.

“Taelyn is Kylee’s biggest fan,” Christa said. “She is a true example of the best big sister; she isn’t overshadowed by Kylee’s success at all because she’s always right beside her, encouraging her and cheering her on.”

“We always grew up riding together, and she’s always been so good and made every single horse she’s on look amazing,” Taelyn said. “I think I’m the most nervous out of everybody watching her ride, but I’m always just so happy for her and proud of her.”

Kylee went on to win another race the next evening, but the only way that weekend could have been better, all three women agreed, as if the win had come aboard a horse trained by the girls’ father, Todd Jordan. So far, Kylee has earned a second and a third for her dad, but she’s definitely looking forward to the winner’s circle celebration when it’s a “family” horse.

Breeders’ Cup
This coming Saturday at Prairie Meadows, the horse Monday Confession might be the one to take the Jordan family there. The 7-year-old gelding was given to Kylee last fall, and won his final race of the meet at the Altoona, Iowa racetrack.

After wintering at the family’s northern Iowa farm, Monday Confession was ready to run on May 1, but Kylee hadn’t yet gotten her jockey’s license. Alfredo Triana, Jr. stepped in to ride him to a fourth-place finish. For his second start on May 23, Kylee had procured a license, but she refused to take over the mount from Triana.

“That’s just the kind of person she is,” Christa explained. “She said, ‘Mom, you just don’t do that to somebody,’ even though Monday is her heart horse.”

Triana won aboard Monday Confession, and Todd made the executive decision that his youngest daughter would ride the gelding in his next race. This Saturday, that plan will come to fruition in Prairie Meadows’ first race on the card.

Monday Confession will run under the Jordan Family Racing banner, and Todd is listed as his trainer. Kylee gallops him every morning, and Taelyn, who is certified in equine bodywork and massage, will have put the finishing touches on the gelding before his race and will likely pony her sister to the gate. Christa will drive down from the family farm on Friday night, as she does every weekend, to cheer them on.

“None of us could do it without my mom, I’ll tell you that,” Kylee said. “And Taelyn has been awesome. It’s pretty cool to have a sister that doesn’t get jealous. She even goes into the jock’s room with me and takes videos of me on the equicizer, and she’s always supported me, even if she gets more nervous than I do!”

This past weekend, Kylee even had the opportunity to ride millionaire Welder in a rare appearance outside his home state of Oklahoma. Kylee had breezed and ridden a few horses for trainer Teri Luneack at Will Rogers Downs, and her quiet hands, professional demeanor, and unshakeable work ethic earned her a chance on the big gray. They finished third, pleasing the trainer.

“To ride a horse like that this early in my career, just wow,” Kylee said.

Of course, Christa wasn’t surprised. Both of her daughters have had a strong work ethic instilled in them from the start, helping with chores at the family farm in both the heat of the summer and the minus 30-degree weather and giant snow drifts of a northern Iowa winter.

Additionally, ever since their daughters were born, Todd and Christa have been hauling them to racetracks on the weekends. Strapped into their car seats in the back of the truck, with the horses loaded on the trailer, the girls would entertain themselves on the way to small tracks like Fonner Park or the Lincoln County Fair, wherever the horses were running. They learned to read the racing program alongside their schoolwork, and maintained straight A’s throughout their educations.

For a while, Christa quietly worried that the constant trips and life around the racetrack would have a negative effect on her daughters. She distinctly remembered asking Todd one Sunday evening, driving back from the races, if he thought they were messing up.

He didn’t have an answer for that. Neither Todd nor Christa had grown up on the racetrack, themselves. In fact, each of their parents had tried to keep them away from the track, though both did grow up around horses. Nonetheless, they made their way to Prairie Meadows together, and now racing is the full-time family business.

It was a few months after that late Sunday night question, when the girls were in third grade, that a parent-teacher conference finally validated all the choices the Jordans were making.

“(The teacher) had had both Taelyn and Kylee in her class,” Christa remembered. “She said they were both the kindest, most inclusive kids in the group, and that their decision-making skills were well above that of their peers. Todd and I walked out of there, and just kind of looked at each other. He said, ‘I guess we’re not messing them up too bad!’”

From starting ponies and breaking babies on the family farm in their youth to arriving at Prairie Meadows at 5:30 every morning like clockwork to gallop horses for their dad, the Jordan sisters are incredibly dedicated to the sport of racing.

Kylee envisions herself spending another four to five years in the saddle, but is already taking classes online to pursue a college degree in accounting. Taelyn dreams of training her own horses one day, and especially loves seeing the difference she can make in them when she performs the bodywork she went to school for.

Above all, though, the sisters plan to stick together. Their relationship has always been close, and neither wants to travel too far away from the other in the future.

Earlier this year, when Kylee was preparing to ride her first ever race at Will Rogers Downs on May 3, she believed that none of her family members would be able to make the trip to the Claremore, Okla. track, since they had horses in Iowa preparing to run. To Kylee’s surprise, Taelyn was there outside the paddock, sitting on a pony and waiting to accompany her to the starting gate.

“Nobody told Taelyn to do that, she just wanted to do it for her sister,” Christa said. “These girls, they just make me so proud.”