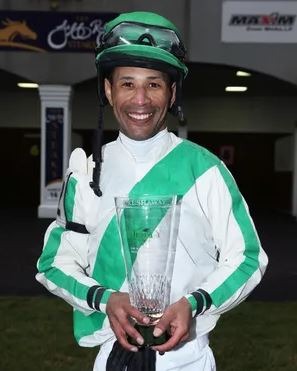 Kendrick Carmouche
Jockey Kendrick Carmouche was his usual upbeat, positive, and optimistic self on Sunday morning at Belmont Park in Elmont, N.Y., despite being hobbled on crutches with a broken right ankle suffered in a spill at the start of Saturday’s l3th and last race on the Belmont Stakes Day card.

“I talked to my doctor last night and I’m flying out tonight to Tennessee. He said both of the major bones on each side of my ankle are broken and I need surgery. They’re going to do it tomorrow and will have to put a plate in one side of my ankle and a screw in the other,” said Carmouche, who was accompanied by his wife, Whitney, who is celebrating her 40th birthday on Sunday.

The surgeon will be the same one who repaired his broken right leg, also a result of a spill, in September 2018.

The latest mishap occurred two races after the rider had finished fifth on Bourbonic in the last leg of the Triple Crown series. Carmouche said that his horse, Kentucky Pharoah, reacted badly out of the gate, unseating him, and then a horse stepped squarely on that ankle as he was lying on the turf course.

Carmouche was transported to a local medical facility by ambulance Saturday night. On Sunday morning he was looking at the bright side of the situation, saying that he has no intention of staying sidelined for the entire Saratoga meet.

“I ain’t missing nothing,” he said with a broad smile. “I’ll be back, better than ever.”

Kentucky Pharoah was caught by the outrider after completing the course and walked home.