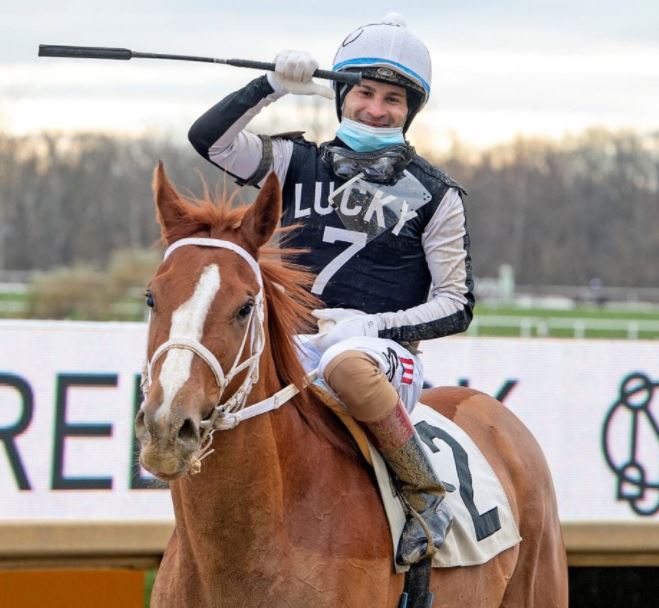 Rider is known for his near-winning ride on the outside-the-gate bolting Spicer Cub.

By BloodHorse Staff Yesterday, 11:13 AM

Mid-Atlantic jockey Xavier Perez recorded his 1,000th victory June 7 at Delaware Park, riding favored In the Loop to a front-running nose victory in the sixth race, a wavier claiming race. Perez was aboard the $5.60 winner for trainer John Robb and owners No Guys No Glory Farm and Gene Gould Jr.

The victory, coming in his lone ride Monday afternoon, led him to reach the milestone with his 8,134th mount. He has been mainly riding this spring at Pimlico Race Course, and to a lesser extent, at Delaware Park and Hollywood Casino at Charles Town Races.

Perez, 33, rode the winter and spring of 2007 in his native Puerto Rico before coming to the U.S. that summer, registering his first career winner aboard Danger Quest Aug. 25, 2007, at Charles Town.

The first major horse of Perez’s career was Susan Wantz’s Dance to Bristol , trained by Ollie Figgins III. During the winter, spring, and summer of 2013, they won seven consecutive races, including the Skipat Stakes at Pimlico, Bed o’ Roses Handicap (G3) at Belmont Park, and Honorable Miss Handicap (G2) and Ballerina Stakes (G1) at Saratoga Race Course—the jockey’s first graded triumphs. They would finish sixth in the Breeders’ Cup Filly & Mare Sprint (G1) at Santa Anita Park at the end of the year.

Perez’s most memorable ride came earlier that year, gaining national attention for a mid-April trip aboard Spicer Cub that saw the gelding blow Pimlico’s far turn while on the lead, then bolt suddenly to the outside fence and around the parked starting gate before making a mad dash to the wire and finishing second by a nose.

Perez, who lost both his irons, continued to urge his mount, nearly pulling off an improbable victory, leading Pimlico announcer Dave Rodman to exclaim, “Do you believe in miracles?!!” The race replay has been viewed over 177,000 times on YouTube.

“Still people talk about it. It makes me feel good. I got famous for something that was crazy. It was a jump start for me,” Perez told Pimlico track publicity late last month.

In recent years, Perez has teamed regularly with Robb.

“He’s at the barn every morning. He’s getting on them; he knows the horses. I think that means a lot, especially with young horses,” Robb told Pimlico publicity.

Perez credits his wife, Jessica, for helping his maturity on and off the track. They met in 2009 when she was ponying the horse he was riding to the starting gate at Colonial Downs and have been together since.

“Thank God I have my wife beside me, 24-7. She’s always supported me, and she never lets me get too down when I have bad days,” Perez said. “It’s been a great journey. There’s been ups and downs, but there’s been more ups than downs, and I’m just grateful for that.”

Perez, whose brother Ismael is also a jockey, has ridden 964 horses to runner-up finishes and 1,034 horses to finish third. His mounts have earned more than $25.7 million over a career that began in 2007.