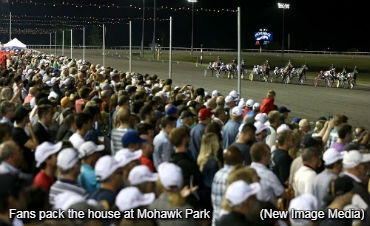 Woodbine Mohawk Park (originally Mohawk Racetrack) is a harness racing track in Campbellville, Ontario.[1] It is owned by Woodbine Entertainment Group (formerly the Ontario Jockey Club) and is about 30 km west of the company’s other racetrack, Woodbine Racetrack, in Toronto, Ontario. Woodbine Mohawk Park also has a large slot machine parlour with over 1,000 slot machines operated by Great Canadian Gaming;[2] some of the revenue is used to increase the horseracing purses.

Contents
1 History
2 Track specifications
3 Races
4 References
History
The track was opened on April 26, 1963, by the Ontario Jockey Club as Mohawk Racetrack,[3] and 4,338 people attended. The 400-acre site was constructed at $3.5 million; it could house 828 horses in the barns and had enough parking for 3,000 cars. The very first Canadian Standardbred Horse Society Yearling Sale took place at the Woodbine Sales Arena, with 30 yearlings cataloged.[4]

On April 18, 1970, a record crowd of 11,470 in attendance for the International Drivers Competition featured eight different countries. In October 1999, Mohawk Raceway hosted eight Breeders Crown races for the first time and was considered the richest event in Canadian harness racing history.

Track specifications
The track is ⅞ mile (1.4 km) in circumference (originally ⅝ mile or 1 km) and is made of crushed limestone. It can accommodate ten starters behind the gate but began placing the tenth horse in the second tier in 2020.[5] The homestretch is 1,095 feet long (334 m), and the far turn has a larger radius than the clubhouse turn to encourage acceleration into the homestretch. There is no hub rail. Racing is usually on Mondays, Thursdays, Fridays, and Saturdays. Tuesday racing is held from June to early October. Post time is usually 7:10 PM. Some days have special post times.

Races
Most of the major harness racing stakes events were moved from Woodbine to Mohawk in 2007. These races include:

Pepsi North America Cup for 3-year-old pacers, which carries a purse of CA$1,000,000 and is Canada’s richest race for pacers. Mohawk hosted the event for the first time in 2007 when Tell All won it.[6]

Metro Pace is a one-mile race for 2-year-old pacers. It is the richest harness race for 2-year-olds with an estimated purse of $800,000. Known as a launching ground to greatness for horses such as Artsplace, Rocknroll Hanover, and Somebeachsomewhere. There is currently a tied race record of 1:49.2 for Captaintreacherous (2012) and Sportswriter (2009).[7]

Canadian Trotting Classic is a one-mile race for 3-year-old trotters and is Canada’s richest race for trotters with a purse of $605,000. It has been won by many of the sport’s greatest trotters, such as Father Patrick, Muscle Hill, Deweycheatumnhowe, and Kadabra. The race record is currently held by What The Hill at 1:51.4[8]

The long-time announcer is Ken Middleton.