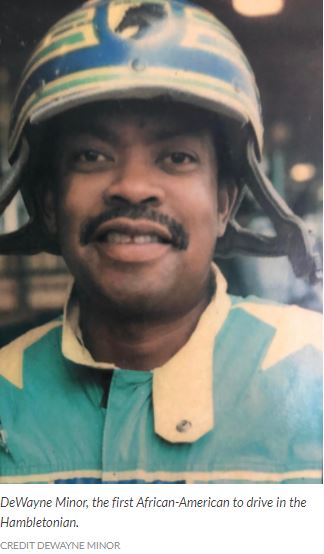 DeWayne Minor, now a horse trainer in Florida, became the first African-American driver in the richest event in harness racing, the Hambletonian, back in 2000. The race is equivalent to the likes of what The Kentucky Derby is to Grade I stakes racing. Joining Friday’s Current Sports with Al Martin, Minor talks about taking pride in helping pave the way for other minorities in the sport.

“I’m a person that really likes to inspire younger generations to do what they think is best for them,” Minor says. “If I can be that vehicle to point them that way, then so be it! I’ll be there for them.”
DeWayne Minor, the first African-American to drive in the Hambletonian.
CREDIT DEWAYNE MINOR

Minor’s interest in the sport was peaked at the age of 11 by his father, Thomas Minor, who purchased a horse for him and his younger brother back when they were living in Michigan. Hazel Park Raceway in Highland Park, Mich. was the track Minor and his brother learned the ropes of the sport.

After Minor graduated from Highland Park High School in 1975, him and his brother ventured on their own, training Michigan 2-3 year-old champions.

Minor recalls moments of resistance that him, his father, and brother received at certain races from their white counterparts.

“They weren’t familiar with blacks owning horses. They would say ‘Whoa! You can’t own horses!” Minor says. “They were so afraid that something was going to happen to us…my dad would say ‘I own these things and this is what we are going to do’…that part kind of shook me a little bit.”

Listen to Minor’s entire interview above!