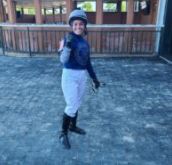 Thanks to femalejockeys.com for the article.

Courtney Gilardo is a young jockey that was recently riding up at Penn National and then decided to move her tack to Parx Racing and I recently had this chat with her:

FOTH: Where were you born and where did you grow up?

FOTH: What sort of girl were you growing up?

CG: I was a mixture of a Tomboy and girly-girl. I liked to dress up but I loved being around the horses and wasn’t afraid to get dirty.

FOTH: So you had a love for horses early on. What did you think of horse racing the first time you saw a live horse race?

CG: I immediately fell in love with the animals and sport. I would watch my father (Howard Lanci) race at Suffolk Downs racetrack and knew from the start I wanted to ride races one day.

FOTH: So your father was a jockey. What did he say when you told him you wanted to be a jockey and I guess both of you as well as myself were sad to see that track close?

CG: At first he didn’t want me to do it. He knows how tough this sport and business is on anyone especially a female and didn’t want me to go through that. After he knew I was going to do it anyways he supported me and now seeing me race he is one of my biggest fans. My family was very sad with Suffolk closing that was our home and if it wasn’t for that track I wouldn’t have the love I have for horse racing.

FOTH: I hate when any track closes. I visited there once. So now did you start to exercise horses up there or at another track before you got your jockey license?

CG: My family moved to Penn National Race Course after Suffolk closed and I learned to break babies for George Albright. I then galloped there for a couple years before moving to New York and Florida to gallop horses for Brad Cox, George Weaver, and Rudy Rodriguez. I then moved back to Penn to start my career as a jockey.

FOTH: Impressive list of trainer’s there. What would you say was the hardest part of becoming a jockey?

FOTH: So how long did you exercise horses in the morning till you felt you were ready and you took out your jockey license?

CG: I galloped horses for 5+ years. I really took my time to learn as much as I could with different horses, tracks and trainers. I wanted to make sure I was prepared as much as possible but you never really learn race riding until you go out and do it!

FOTH: So tell me about your first race, which was at Penn National in 2020. How nervous were you in the jocks room? How about the paddock and being loaded into the gate?

CG: I was surprisingly calm in the jocks room and the paddock. It didn’t really hit me until the post parade and I was a little nervous but mostly excited. It was my horse’s first race in a months and she was a little nervous. We didn’t get the best break but all in all it was experience and weight off your shoulders to get the first race out the way.

FOTH: Now tell me about your first win, which was also at Penn National. Did you win by a lot or in a photo?

CG: The first win is like no other. It came by surprise! I won on a horse named High Flying Guy which shipped in from Parx. It was my first time riding him. I remember getting the lead and the wire couldn’t come fast enough! I won by about a length and it was very exciting!

FOTH: You must have been in complete amazement jogging the horse back to the winner’s circle.

CG: I was so excited, my face hurt from smiling so much! It was such an awesome feeling.

FOTH: Was the family there by chance?

CG: Unfortunately they weren’t. I know how much they love and support me so they were there in spirit.

FOTH: Did the jockeys get you after the race good and did you know it was coming?

CG: Yes they did! They dumped water on me and lots of shaving cream. It’s a tradition so I anticipated it but they got me right as turned the corner so still a surprise .

FOTH: So now take me through a typical race day these days.

CG: A typical race day at penn for me is going to work in the mornings and afterwards go home for a little bit to relax . Eat a light lunch and then head to the track to go over program again and get ready for the races .

FOTH: I know they are finally, yes finally starting to open up Pennsylvania. What are some things you like to do when away from the track?

CG: I love to spend time with my family. When the weather is warm I enjoy going for hikes and going to the lake.

FOTH: Now once you can start riding at other tracks, will you ride out of town?

CG: Yes, I would love to be able to ride at as many tracks as possible and make the most with the bug year .

FOTH: Does the thought of ever getting injured ever enter your mind?

FOTH: Are there any other female riders up at Penn currently?

CG: Yes there is two as of right now. Kaylia Albright and Brittney Scampton.

FOTH: Now tell them hi from me and do you feel that jockeys for the most except on big race days are some of the most underappreciated athletes in sports today?

CG: Will do! Yes I do think jockeys are under-appreciated. Jockeys are the first to get the blame for not winning a race. I don’t think anyone unless in this sport knows all that goes into it. The physical and mental aspects, the diet, the hard work, and the literal blood sweat and tears.

FOTH: Your a 110% right with that. Now do you feel that racetracks unfortunately need to have casinos to survive these days, especially now that sports betting has become big?

CG: No, I don’t think they need casinos. Some racetracks did better having them but unfortunately some with them  end up taking the focus away from racing and more about the casino. Racing growing up was about the fans and the horses. I think if racetracks do more promotions they could bring out more fans.

FOTH: You do have a point there. Now after you retire in 25 years lol, could you see yourself being a trainer, owning horses or just being involved in racing in one form or another?

CG: I will always be a part of racing whatever I do. It’s my life. That’s also why I took my time prior to riding races. I learned all different aspects of the industry. I would like to be a trainer or a racing analyst.

FOTH: Good for you. Toughest thing for you so far has been?

CG: Toughest thing right now is quarantine and not being able to ship to ride to other tracks. With the bug year you want to ride as many races as possible to learn as much as you can and with quarantine it is hard only being at one track.

FOTH: Now if a young girl came up to you and said she wanted to ride races, what would you tell her?

CG: Once quarantine is lifted things will be better. I would tell her to always work hard and never give up. Stay focused on your goals and take criticism when people are trying to help you. Always have a good work ethnic and attitude.

FOTH: Thanks for the interview Courtney any last words to say to wrap this up?

CG: Thank you for the interview and with a name like “footboy” you might get sponsored by Nike soon lol keep kissing those female feet, which I expect to see you do!