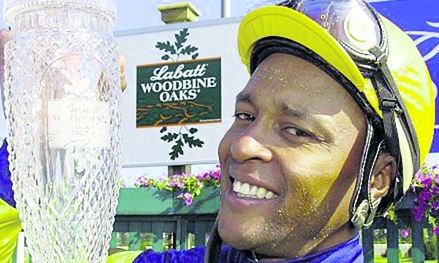 Patrick Husbands (born May 22, 1973) is a Barbadian jockey in Thoroughbred horse racing. The son of a jockey, he began riding as a young boy, turning professional in his home country where he rode successfully until emigrating to Toronto, Ontario in 1994. In 1990 he became the youngest jockey to win the prestigious Barbados Gold Cup at just 16 years, 9 months on his mount Vardar.

Racing out of Woodbine Racetrack, in 2003 Husbands won the Canadian Triple Crown aboard the colt Wando and that year became his breakout year. Among his other notable wins, he rode Numerous Times to victory in the $1 million 2001 Woodbine Mile and Exciting Story in that same year’s Metropolitan Handicap at Belmont Park in New York. He rode Arch Hall to three straight wins between 2004 and 2006 in the Sir Barton Stakes. In 2007, he was the regular rider on Canadian Horse of the Year, Sealy Hill.

On June 5, 2014 it was announced the Husband would be the 30th winner of the Avelino Gomez Memorial Award. The award recognizes jockeys who are Canadian-born, Canadian-raised, or a regular in the country for more than five years, who have made significant contributions to the sport of thoroughbred horse racing.[2]

Husbands makes his home in Brampton, Ontario. He has a brother (Simon Husbands) and a nephew- apprentice (Terry Husbands) who are also jockeys.