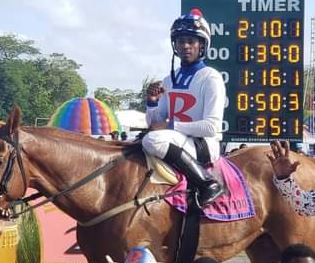 By Matt Hunter Saratoga Springs
The sensation of being in the saddle is what Jalon Samuel says gets him out of bed early each day.

“The wind hits you in the face, and you hear them breathing, their feet hitting the ground,” Samuel said. “It is just like you are gliding on air; you know what I mean? You are going so fast you are just floating on air. It’s a beautiful, beautiful feeling.”

What You Need To Know

For the past 12 years, morning rides have been Samuel’s routine as a professional thoroughbred jockey.

“My dad always took me to the races as a little kid, and I just fell in love with it from there, you know what I mean?” Samuel said. “I always wanted to go see the horses from the first time.”

The 27-year-old began riding as a teen at a small track in his native Barbados.

“If I put it this way, riding in Barbados is like driving on a cart road, but riding here in America is like you are on a highway,” he said. “So it is a whole different scenario.”

“I’ll get into a zone; I’ll get into a focus on it. On Gold Cup day, Gold Cup week, two weeks out, I’m a whole different person,” said Samuel, whose most recent Gold Cup victory came in 2020.

Samuel has raced on and off at some American tracks before, but he’s testing his luck at Saratoga for the first time this summer.

“I’m really enjoying this experience,” he said. “This is what I have been working hard toward; this is the pinnacle of the pinnacle. This is where every jockey wants to be.”

His work ethic and skill have been noticed by a number of the Spa’s trainers.

“He’s a good rider, has good hands and a good attitude,” said Lloyd McKinnon, who has relied on Samuel to ride his horses during morning training hours and in the afternoon’s races.

“The one thing I like is you saw him out in the morning time, and he was galloping, and he was breezing, and he was just working hard,” trainer Chad Summers said. “I’m a guy that likes to reward hard work.”

Samuel’s devotion has yet to translate to success on the racetrack. Riding in a few races each afternoon, none of his mounts have made it to the winner’s circle so far this summer.  That hasn’t deterred young fans from seeking out the newcomer’s photo and autograph before and after many of his races.

While he’s yet to reach the same heights he achieved in Barbados, Samuel says he’s enjoying every step and stride of the journey.

“Oh my God, I’ve been working toward this all of my life,” Samuel said. “It’s a dream come true, and I’m beyond the stars to have this opportunity.”