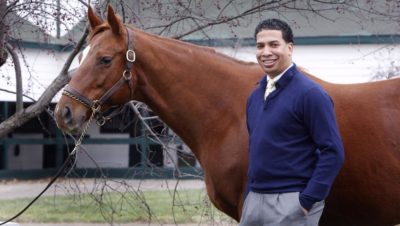 Greg Harbut, pictured above with Grade 1 winner Tell a Kelly, and partners Raymond Daniels and Wayne Scherr will start Necker Island in the 2020 Kentucky Derby Presented by Woodford Reserve Sept. 5 at Churchill Downs. (Matt Goins photo)
The power of representation on the biggest of stages cannot be overstated.

For dreams to manifest into reality, opportunity must first present itself for the aspirational to become palpable. The more treasured the prize, the more grateful those who seek it are for the chance to chase it – as evidenced by the gratitude that spills forth from those fortunate enough each year to participate in Thoroughbred racing’s most famous test.

No matter its place on the calendar, the Kentucky Derby holds sway as the most high-profile event in the sport because, no matter its place on the calendar, a 3-year-old horse only gets one chance to win the race that transcends the industry. Like many multigenerational horsemen, Greg Harbut has long sought out the day when he can answer “Yes” to those who inevitably ask, “Have you ever had a runner in the Derby?”

That he will answer that question this year of all years positively resonates on a level that cannot be overemphasized.

When Necker Island’s name shows up in the entry box for the 146th edition of the Kentucky Derby Presented by Woodford Reserve, the son of Hard Spun will be adding to storied family history and carrying hopes not defined by whatever morning-line odds he is given. With Harbut, a noted bloodstock agent, and Lexington-based businessman Raymond Daniels representing two of Necker Island’s three owners, this season will mark the first time in 13 years that a Kentucky Derby entrant has had African-American ownership.

While the early history of the Kentucky Derby is a chronicle of the intrinsic role, the African-American community played in building the sport’s foundation, the presence of BIPOC in positions of prominence in racing has remained a scarcity to this day.

Before this season, the last Derby contender to have African-American ownership was the eventual two-time Horse of the Year Curlin, who counted Shirley Cunningham Jr. through his interest in Midnight Cry Stables among his contingent when he finished third in 2007. When jockey Marlon St. Julien piloted Curule to a seventh-place finish in the 2000 Kentucky Derby, he became the first African-American jockey to ride in the race in 79 years – a far cry from when Black reinsmen won 15 of Derby’s first 28 runnings.

In a year that has seen the world consumed by the coronavirus pandemic – forcing the Kentucky Derby itself to move from its usual date of the first Saturday of May to Sept. 5 – the nation has also been in the throes of a reckoning brought on by repeated acts of racial injustice. Louisville has been at the center of such uprisings due to the death of Breonna Taylor, a 26-year-old EMT who Louisville Metro Police fatally shot as she slept in her home on March 13. So while being part of the Kentucky Derby field would be an emotional endeavor for Harbut in any season, the fact he and Daniels have a seat at that table at a time when the demand for equality is deafening is something bigger than the classic itself.

“I don’t think you can put it into words. A tweet went out where someone saw us in the paddock at Ellis Park, and they said, ‘To see African Americans on a major race day is like seeing a unicorn.’ I think that sums it up,” Harbut said. “We’re just not out there; we’re not there. So the fact this is one of the top five, if not the most, prestigious races in the world, to have African-American ownership on this stage, I think, makes a statement.

“I hope what it does is allow other African Americans to think about getting involved in the business and realizing they can participate, realizing there is room for them, and hopefully research more and understand that the history starts and begins with us in horse racing, particularly with the Kentucky Derby.”

Harbut knows he speaks as his family has been associated with the racing elite for nearly a century.

Walk into any racing museum, and one is likely to discover why the Harbut surname carries special weight. From 1930 to 1946, the legendary Man o’ War was cared for by Will Harbut – great-grandfather of Greg – and the two became so entwined that when the elder Harbut died in 1947, his obituary in the BloodHorse listed the racehorse regarded by many as the greatest of all time among his survivors.

The horsemanship Will Harbut was renowned for was passed down to his son Tom Harbut, who headed up the Spendthrift Farm stallion barn during the operation’s heyday in the 1950s. In 1962, the Harbut family would send out its first Kentucky Derby starter as Tom was part owner of a colt named Touch Bar, who would finish 11th in that year’s run for the roses. That piece of familial pride isn’t found in any race chart, however. Tom Harbut’s name did not appear in the race program, and he could not attend because Blacks were not allowed to sit in the grandstands.

“Obviously, it’s extremely emotional because this is a race my grandfather participated in in 1962 … and he was not allowed to be listed nor attend that Derby,” Greg Harbut said. “I don’t know how many non-African Americans have had multi-family lineage participate in ownership, but I would think that is a rarity among us as African Americans to have that. So that is something I am very proud of. I’m extremely emotional and happy to be able to take on the legacy of my family in this time.”

Greg Harbut figures he was about 5 years old when he first noticed his great-grandfather’s placard at the Kentucky Horse Park. Since that first seed of what could be was planted, he added a fresh layer of shine to his already accomplished name.

Since cutting his teeth working for trainer Tom Amoss as a teenager and getting accepted into the prestigious Darley Flying Start program, Harbut has operated his own bloodstock agency for the last 10 years and boasts a roster of international clients. His keen eye for horseflesh put Necker Island on his radar when the colt won two of three starts during his juvenile season and when the chestnut runner showed up in an allowance/optional claiming test at Churchill Downs on June 13, Harbut helped assemble the ownership group that put up the $100,000 to take him home.

In two starts since joining the barn of trainer Chris Hartman and carrying the banner for Harbut, Daniels, and fellow co-owner Wayne Scherr, Necker Island has held his own against some of the names also slated to be in the Kentucky Derby starting gate. He finished third in the Grade 3 Indiana Derby on July 8, beaten just a half-length for second by Major Fed. While heavily-favored Art Collector lived up to his billing in capturing the August 9 Runhappy Ellis Park Derby, Necker Island was able to rally from well back early on to get up for show money once more.

“Necker Island as a 2-year-old was a horse with a lot of hype and excitement,” Harbut said. “A lot of people had him early on as a Derby-type of a horse. We knew the horse had a lot of back class about him … and that made him a fascinating claim for us. We certainly respected [previous trainer] Stanley Hough and the horsemanship he brings to the table, but we just thought with a few changes, maybe we could turn the horse around to get him going again.

“Chris [Hartman] has figured some things out about the horse, and the horse has improved. He’ll be a longshot [in the Kentucky Derby], but I think [2009 winner] Mine That Bird proved that the only way you can’t win is by not being in the race.”

When this year’s Kentucky Derby programs are printed, there will be a tribute to the past and a nod to the future represented alongside Necker Island’s performance lines. Harbut has bought into the colt under Will Harbut Racing Stables, his newly-formed syndicate named for his great-grandfather and formed to bring other African-American owners in to participate at a high level.

Because the opportunity to have an opportunity is something that should be available for all to chase.

“Anytime I go to the Horse Park or the Hall of Fame, and I see my grandfather mentioned or his picture there … that is something that overwhelms me,” Harbut said. “For him to gain the notoriety he did as an African-American male back then, I mean, that was just unheard of. I look at it as each generation has taken it a step further, so I’m extremely proud of my great-grandfather and my grandfather for them to accomplish some of the things they did in the era when opportunities were minimal.”