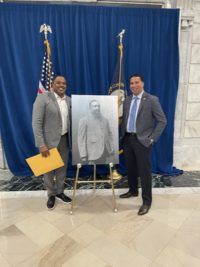 LEXINGTON, Ky. (WKYT) – Two trailblazers are making noise in the horse racing industry by moving more African Americans from the grandstands into the winner’s circle.

They are African American Thoroughbred owners that are chomping at the bit to get more diversified representation in the sport of kings. Just how will they bring more along in the saddle

“I mean the whole beginnings of this business was really built on African Americans,” Ray Daniels said.

In the early 1900s, Jim Crow came on the scene and African Americans could no longer participate.

Fast forward more than a hundred years, Greg Harbut and Ray Daniels have formed an organization to promote and educate African American participation in a sport where they were once the majority.

Harbut and Daniels say their purpose is to “create a workforce development and retain those people in the state of Kentucky the horse racing business is a multi-billion dollar business a year and we want to create awareness and opportunity to young people of color.”

The Ed Brown Society wants to focus on educating students, showing them the many jobs they can have in the industry. Maybe it could move a fan from the grandstands to a buyer to an owner in the winner’s circle.

But the challenge getting young people to participate in something they don’t normally see.

“You gotta take young folks out to horse farms so they can see it for themselves and actually get hands-on and expertise about the work that goes on at a horse farm,” Daniels said. “We hope to expose them to it and let them know that these are really well-paid jobs.”

Becky Ryder is with Phoenix Rising Lex, which is devoted to promoting the history of African American horsemen. Ryder says there is a reason African American influence on the track has decreased today.

“I think in part the generational knowledge has not been passed down or respected,” Ryder said.

“I think the industry is trying very hard to be inclusive,” Daniels said.

Last year, Daniels and Harbut found their own lane in the Derby as owners of Necker Island. They were the first African Americans to own a horse in the big race in 13 years.

They want to take that experience and the spirit of Ed Brown and make the sport of kings grow for everyone.

“Now, our challenge is, as African Americans, is that you ought to look at this as a career opportunity,” Daniels said.

The Ed Brown Society believes that, if an ex-slave can be a jockey, trainer, and owner, surely, the next generation can take the next mount.

So far, the Ed Brown Society has had sessions virtually. But, in July, they plan on doing in-person meet-ups with kids.

As for Harbut and Daniels, they don’t have a horse in this year’s derby, but they will be in attendance educating 30 new African American owners.