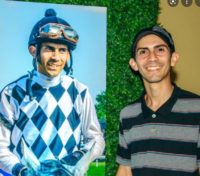 Jose Angel Garcia has traded in his helmet, boots, and goggles for a new cell phone and a condition book.

The 30-year-old Garcia, who won the final race of the 2017 Summer Festival of Racing at Tampa Bay Downs aboard 6-year-old gelding Cedula Ocho on July 1, is working this season as an agent for veteran jockeys Huber Villa-Gomez and Javier Santiago.

“I’m doing something that I love,” said Garcia, who is also working part-time as a FedEx delivery driver. “I’m a hard worker and they’re hard workers, and when you have that combination, everything pays off.”

Four weeks before his July 1 victory, Garcia went down in a spill at Gulfstream Park, injuring his right ankle and straining his Achilles tendon. When the pain persisted, he visited a doctor who discovered he had a fractured right ankle, forcing him to stop riding.

After a couple of weeks of soul-searching, Garcia heeded the advice of several riding friends to try being an agent, which requires “hustling” assignments – communicating with trainers to line up business for riders, both in the morning working out horses and in the afternoon riding races.

“I’d actually been thinking about it for a long time,” Garcia said. “A lot of jockeys have told me they thought I could be a great agent (Garcia is known as one of the most personable individuals on the Tampa Bay Downs backside). It’s not that I wanted to do it right now, but the opportunity came and I’m going to do anything I can to be successful.”

The change in jobs helps his wife Delmaris rest easy knowing Jose isn’t going to call her to say he’s been injured. They have two daughters, Emily, 7, and Leah, 7 months, and they appreciate having Jose around the house more often.

“I’d been riding for 10 years, and you get used to waking up early and being at the barns,” Garcia said. It helped that he knows almost every jockey who rides at Tampa Bay Downs.

“I was watching the races at home (after his injury) and I knew Huber had a great meet at Presque Isle Downs (in Erie, Pa.),” Garcia said. “I thought I could help him here because there are a lot of trainers I used to ride for that haven’t used him before.”

Villa-Gomez, who most serious observers agree is one of the most underrated jockeys at the Oldsmar oval, finished second in the Presque Isle Downs standings last summer with 80 victories, raising his career victory total to 1,904. He is excited about working with Garcia because of his know-how, work ethic and outgoing personality.

“I can tell he is going to be a good salesman for me,” Villa-Gomez said. “It will take him a little time to get going; right now, he is like a ‘bug boy’ (apprentice jockey) who is learning everything. He has to keep pushing himself, but you can see by how many mounts I have (six each of the first two days and eight combined today and Saturday) that he has the ability to do this.

“He knows how to talk to trainers and he knows how to use the phones,” added Villa-Gomez, who did not have an agent here last season. “I’m horrible with that. It always helps when you have somebody hustling for you and pushing you so you can focus on riding.”

Santiago, his other rider, is named on seven horses Saturday. A winner of more than 2,300 career races, his talent is well-known in Puerto Rico, where he has won 20 graded stakes (including five Grade I events) since the start of 2015.

Santiago has also enjoyed outstanding success in his occasional stateside forays, winning three graded stakes in both 2004 and 2011 (including the 2004 Louisiana Derby on Wimbledon for trainer Bob Baffert).

“I’ve known Jose for a long time (Garcia rode his first race at Camarero, when he was 19),” said Santiago,  “and my brother Hector, who is working here as an exercise rider, told me he was going to try to be an agent, so I gave him a call.

“I have a lot of confidence in him because I know he’s not afraid to work hard and he likes to talk to everybody,” Santiago said. “I can ride six, seven, eight horses a day no problem, so I told him if he wants to do it, I want to do it with him.”

In a competitive jockey colony featuring six past Tampa Bay Downs jockey champions, none named Villa-Gomez or Santiago, it might be tough for Garcia’s riders to establish momentum early. But he is psyched for the challenge.

“Working with these two jockeys is an opportunity that I think is unreal,” Garcia said. “They’ve been leading riders and won a lot of stakes races, and they’re both very professional.

“You introduce yourself, you hustle, you talk to people. It’s my job, and I feel comfortable doing it,” he said. “I trust in my riders, and I know for sure they are going to be in the top 10 jockeys here.

New to the Paulick Report? Click here to sign up for our daily email newsletter to keep up on this and other stories happening in the Thoroughbred industry.
Copyright © 2021 Paulick Report.