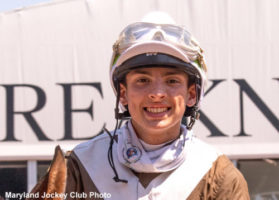 A quick look will show Charlie Marquez still on top of the rider standings at historic Pimlico Race Course during its extended Preakness Meet, a spot the teenage sensation has held for weeks, but a closer looks reveals one significant change.

Marquez’s name no longer appears in the program with an asterisk, known as the “bug” in racing parlance, meaning the 18-year-old Columbia, Md. native has graduated from apprentice to journeyman. Nearly three weeks in, the transition has been seamless.

“So far, it’s been pretty straightforward. I had to swap agents because they’re not allowed to have three journeyman,” Marquez said. “So far we’ve done a good job, just trying to work hard every day and win as many races as we can.”

Marquez hired Tom Stift, who also represents injured jockey Alex Cintron, to be his agent after having success with Marty Leonard, who books mounts for champion riders Sheldon Russell and Jevian Toledo.

“They all have the stigma when they lose the bug. Trainers will all watch the first couple weeks,” Stift said. “He really had a great first two weeks without the bug. I’ll get a message from a trainer and they’ll say, ‘But he lost the bug,’ and then I’ll show them a screen shot of all his wins without the bug and they say, ‘Ok, put him on.’ He’s crossed that hurdle.”

Marquez won on the fourth mount of his first day as a journeyman, May 30, with Tusk for trainer Mary Eppler at Pimlico. Through June 16, he had a record of 7-6-8 from 51 mounts since losing his five-pound weight allowance.

During an apprenticeship that was interrupted for 2 ½ months when Maryland racing was paused from mid-March to late May amid the coronavirus pandemic, Marquez won his first race at 16 (Sierra Leona, Jan. 9, 2020 at Laurel Park), spent the final three months of last year riding in New York under the tutelage of retired Hall of Famer Angel Cordero Jr., and returned to Maryland to start 2021 and earn his first stakes win (21-1 Shackled Love, March 14 Private Terms at Laurel).

A son and grandson of successful jockeys in both the U.S. and Puerto Rico, Marquez has also dealt with his first injury. He emerged from an Oct. 10 spill at Belmont Park with what was initially thought to be a fractured right wrist but turned out to be a sprain. He rode three races Oct. 18 before taking the next four weeks off.

Marquez ended 2020 as the leading apprentice rider in Maryland with 58 wins, ranking seventh overall, and for the year finished with 71 wins and $1,981,358 in purse earnings from 531 mounts. He was not among the three finalists for the Eclipse Award as champion apprentice won by Alexander Crispin, also based in Maryland.

“Other than covid ruining most of it, I thought I had a good bug year and I’m just trying to keep the good luck rolling,” Marquez said. “I just try to study all the riders every day and learn as much as I can. Every day I just try to progress my learning.”

His dedication shows in Marquez’s eagerness to ride at various tracks in the Mid-Atlantic region, and with the ease in backstretch restrictions he is able to go to Delaware and the Fair Hill Training Center in Elkton, Md. to exercise horses. He also finished his studies and earned his GED to focus on his career.

“You can tell he’s just got natural hands on a horse, that’s the biggest thing. And he’s just getting better. He’s only 18, he’s got a good future ahead of him,” Stift said. “He does whatever he’s asked, he works hard, he’s always early to the barn. It’s nice to have a young rider like that who’s just happy to ride.

“He’s real family-oriented. He’s very close with his mom and, bringing him up around the racetrack, you’ve got to give her a lot of credit,” he added. “A lot of times when they get to the track and they’re young and win right away and get the money they get a big head, but he’s just a nice kid.”

Marquez maintains a four-win advantage over J.D. Acosta (26-22) at Pimlico and is named in six of eight races for Friday’s return of live racing that features a Maryland state record carryover jackpot in the 20-cent Rainbow 6 of $1,093,866.34.

“[My mom Valerie is] like my number one fan. She’s with me everywhere I go. She’s my right hand. I have to give her credit for everything that I’ve earned,” Marquez said. “I get asked all the time [about my goals] and it’s always the same: I want to win the Derby one day and be in the Hall of Fame. That’s just what work toward every day.”