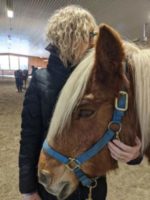 By Jessica Dee Humphreys Special to the Star

Psychologist Jim Marland lives on a horse ranch, so he knew horses were intensely empathetic. “We had just lost a grandson,” he says gruffly, “and I went to feed the geldings. They normally shove their noses at me to demand hay. But, that day, this one fellow put his head over my shoulder and just pulled me into his chest.” Marland’s traditionally British stiff upper lip quivered as the horse hugged him. “‘Listen buddy,’ I said to him, ‘I’m an Englishman – no one knows what I’m feeling. But you do.’”

Equine therapy has been one of the cornerstones of Wounded Warriors Canada’s work for almost ten years. Through its Couples Resiliency Program, Marland uses the natural sensitivity of horses to help couples better empathize and communicate.

This four-day program, held on ranches in Alberta, Nova Scotia and Ontario, is offered free of charge to military veterans and first responders who have been diagnosed with an operational stress injury, such as post-traumatic stress disorder (PTSD). Small groups of couples are brought together in a tranquil location to take a break from the stressors of daily life and focus fully on their relationships.

“About 60 percent of the program is working with horses,” says Marland. “Not riding them, but brushing them, walking with them, and guiding them.” The rest of the time is spent doing clinical work and group therapy.

“There were a lot of emotions, a lot of tears,” says Dorann Hargreaves, who participated in the program at WindReach Farm in Whitby with her husband Chris and horses Joe, Max, Sprinkles and Goldie. “It is a safe environment, so a lot of people were saying things they had never confided to their partner before.”

“It is about learning to communicate properly with each other,” says Chris Hargreaves, who was diagnosed with severe PTSD after 20 years as a police officer in London, England, and Toronto. “The horses pick up on all the negative energy.”

“The horse is a prey animal,” explains Marland. “It is always assessing threats just like (military personnel and first responders) are. Plus, they are very good at assessing the people around them. So, one moment a couple could be working with the horse and the anxiety level is low – the horse senses, ‘I can relax too, maybe even go to sleep.’ The moment the couple become tense or anxious, the horse senses it right away.” Marland explains that this impartial and completely nonjudgmental feedback from the horse is “not a criticism. It’s just an invitation to ask, what happened?”

Chris and Dorann were referred to the program by Toronto Beyond the Blue, a group that advocates for police with PTSD and their families. They feel Wounded Warriors Canada helped save their marriage, maybe even their lives.

“If we had still been in the U.K.,” says Dorann, “Chris would never have had the support that he’s had here. Being completely honest, if we were in the U.K. we wouldn’t be having this conversation today, because Chris wouldn’t be here.”

Dorann, a retired 911 operator who also has experienced trauma on the job, explains how the program worked: “Every day, we would take a horse from the stable and groom it together. They would give you a topic to talk about. They were always difficult topics that might normally be trigger points. But grooming the horse was such a calming thing. Just being among these beautiful, graceful animals brought your anxiety level down.”

After grooming, the couple would then be tasked with an exercise, such as guiding their horse through an obstacle course without touching the animal. This required enormous trust, excellent communication, and a gentle demeanour. “When you have a partner that has PTSD,” Dorann says, “they can fly off the handle at the slightest thing. That communication is so important.”

Horses are stubborn, sensitive, hyper-vigilant, and noble. All qualities that can describe a veteran, police officer, firefighter, or other first responder with PTSD. Learning how to communicate well with the horses gives spouses tools for communicating with their injured partner. And learning how to communicate calmly, without distressing the horse, reminds the partner to keep their tone and intention gentle and respectful.

“The animal takes your mind away,” says Chris, “out of the cycles of fight or flight, and brings you back to using the logical side of your head.”

“(Working with the horses) definitely changed our relationship in a positive way,” says Dorann. “I had a little anxiety on the last day – how will we continue this without these animals around? But what you don’t realize is how many new tools you have in your toolbox from the last four days, that you are able to do it.”