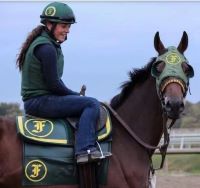 Thanks, Veronica Gizuk • Feb 23, 2021 – Gatetowire.ca
Twenty-four-year-old Kelsie Figgins was born and raised in Charles Town, West Virginia. She has been around racing since a young age. Kelsie is the daughter of multiple graded stakes-winning trainer Ollie Figgins III. “Horses are my whole life, and I would not have it any other way,” said Figgins.

Kelsie grew up in the show ring with her sisters riding the families’ numerous ottbs that they retrained to become hunter/jumpers. When Kelsie wasn’t showing or in school, she spent her spare time following her father around at the track, learning every aspect of racing that she could. Kelsie received her exercise rider’s license in high school and began riding at the track regularly. After graduating high school, Kelsie became the assistant trainer for her father.  She was the assistant for six years and travelled all over with the horses. Kelsie recently decided to take an assistant job with a smaller trainer Manolo Mangual at Charles Town to focus on her passion for rehoming ottbs.

Over the past year, Kelsie and sister Emilie started their own business called Figgins Off Track Thoroughbreds. Since starting up in June, the two have successfully rehomed 13 thoroughbreds. “We know how important aftercare is for our horses who give us their all on the track,” said Figgins. The two also take part in the Retired Racehorse Project. This year they will be taking three horses. Emilie’s entry is Arcaro by Tapit, and Kelise’s entries are King of Blues by Luftikus, and I Need You by Denis of Cork. Kelsie’s entries are two West Virginia breds that she got from trainers at Charles Town. “This industry has a lot to it, and I am glad to be involved in so many ways,” said Figgins.