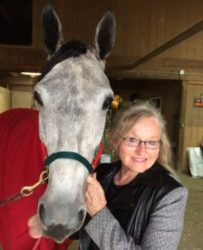 Thanks to Victoria M. Howard https://harnessracingupdate.com/2020/10/04/trainer-jo-ann-looney-king/

The first thing that comes to my mind when I think about this issue’s featured Superstar is the idiom, “The apple doesn’t fall far from the tree.”

The bubbly blond beauties are both renowned in our sport; Jo Ann for her many accomplishments in training superstar equines and daughter, Heather, a “firework” correspondent and television journalist for standardbred horse racing.

Jo Ann has another daughter, Susan Looney, who is also instrumental in the sport for in 1983, when she was 16 years old, Susan was the youngest driver to win at the Meadowlands withOne For All.

It is a family affair and has been since World War II ended. That is when Jo Ann’s father returned to the U.S. and met and wed his future wife (Jo Ann’s mother).

Living a humble life, the family set up house in a modest trailer in Wilmington, DE.

“In the mid 50’s, when I was around 10 years old, my parents went to the bank to withdraw their life savings,” Jo Ann said. “Their life savings came to $350, which was not much money even for that time. After withdrawing the money they went to the Harrisburg sale to hopefully purchase a racehorse. Being an only child I went with my parents everywhere, so I accompanied them to my very first horse sale — the first of many.

“I sat there and watched one beautiful horse after another walk onto the stand, and of course I wanted each and every one. Unfortunately, the horses went for much more money than my parents had to spend. I was discouraged we would go home empty handed when towards the end of the sale a horse named Reggy Scott appeared and the last bid was $350 — made by my father.

“Whether it was ‘beginner’s luck’ or fate, Reggy Scott went on to be an open pacer and his portrait still hangs in our barn today.

“That was the beginning for me, my family and the start of our family business. I couldn’t wait to go to the barn after school and on weekends.

“Delaware gets downright frigid in the winter so mom would get the wool horse blankets and wrap me in them to keep me warm as I jogged the horses on the track.”

Jo Ann was one of the lucky ones who married not only her best friend, but partner. If you’re involved in harness racing it’s difficult if one person is in the business and the other isn’t, for you’re pretty much married to it having to spend most of your waking hours at the barn and racetrack.

“My husband, Jim, (King) and I have been together for almost 40 years. From day one, my parents and my two daughters accepted him as their son and father.

“We have worked together almost every day and somehow it works for us. Although I’m at the barn every day, Jim does the physical training, but of course I put my two cents in on how the horse can be helped.

“I’m not easy and often complain to my drivers when my horses don’t race well. Even when I’m at home watching on television, I’ll call Jimmy and tell him if I think the horse’s head is too low or high and if I think the hobbles don’t look right.

“We keep between 50 to 55 horses in our stable. Some we own ourselves, and others we train for owners. As for the ones we own, I enjoy buying horses.

“Luckily for me, if I see a horse I like and want to buy him I don’t have to ask my husbands permission — I just go and buy it — that is, as long as the money is there.

“Jim always says the same thing, ‘You buy them and I’ll train them,’ which leads me to Shartin N.

“Rich Pollucci sent me a picture of this mare that was very plain: black legs and white hind foot. So what was so special? She was built like a tank — had a massive rear end and I had to have a piece of her.

“Jimmy wasn’t so sure because it was a lot of money. He asked if I had seen her racing videos and I said ‘no’ but I just had a good feeling about her. I insisted and refused to take no for an answer.

“So here we are after watching our parents put a lifetime in the business as we did…. and here comes Shartin N out of the blue. Like it was just supposed to be all along.

“Thank you, God, for I could never describe what she has meant to me and what she has given us. Every time Shartin races I wear my mom’s heart necklace and my dad’s ring for luck. I know they are along with us on this journey — and that makes it even better.”

The Kings have another partner on several horses they own — including Shartin N — top driver Tim Tetrick.

“We met Tim when he came to Delaware from Illinois to race, before his exit to the Meadowlands. I’m a person who watches people — especially drivers — and I can tell you who gives you the best bang for your buck on the track and Tim fills that bill, for he’s always thinking.

“We’ve owned horses together since 2011 and it’s been a good thing for us. I honestly don’t know anyone who can do on the track what Tim does and we feel blessed that he drives for us.”

Jo Ann said she doesn’t have any specific ideas about how the sport can evolve.

“There are a lot of people out there with good ideas, so, as Oprah would say, ‘Here’s what I know for sure…’ For the most part horsepeople are good. I try to be happy for other people’s success and I’m grateful when people are happy for mine.

“I’ve lived the greatest life and have the greatest family. I have a wonderful husband and children, great horses, mind-blowing memories, good friends and this wonderful horse business to thank for most of it. And if I had to do it over again — I wouldn’t change a thing.”