In recent decades, no group has dominated the saddle like Hispanics.

Since 2000 alone the percentage of North American jockeys with Hispanic surnames has risen from 30 to 50 percent. 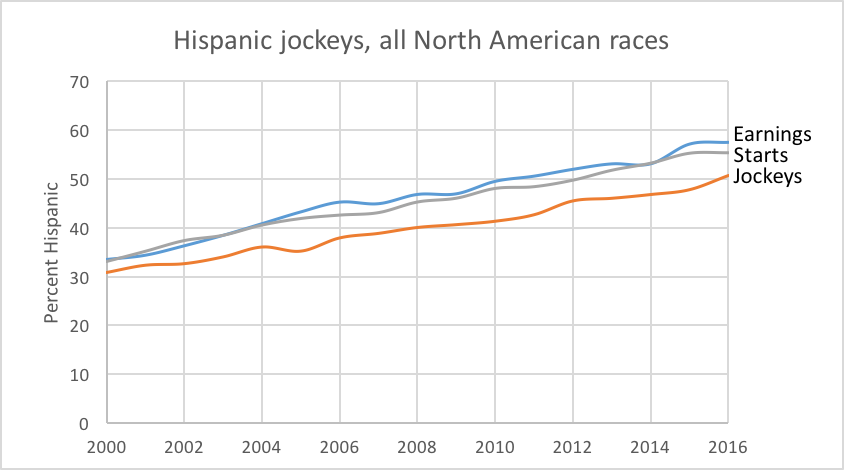 Source. Equibase list of North American starters, run through software that converts last names into a probability that each jockey is Hispanic *

In 2016, Hispanic jockeys started more races and won more money than jockeys from all other groups combined. In recent Triple Crown races, 60 to 70 percent of starters have had Hispanic last names.

The first Hispanic rider to start a Triple Crown race was Joseph Rodriguez, who finished second on Upset, behind Man o’ War, in the 1920 Preakness Stakes**. But Hispanic jockeys really took off around 1958, when for the first time two Hispanics, Manuel Ycaza and Ismael (Milo) Valenzuela, started the Kentucky Derby. Riding Tim Tam, Valenzuela won the Derby and went on to win the Preakness and finish second in the Belmont. Since then there have only been two Triple Crown races (the 1960 and 1985 Preakness Stakes) without at least one Hispanic jockey. By February 1962, after Braulio Baeza had won the 1961 Belmont Stakes, Sports Illustrated was writing about ‘The Latin Invasion’ of Thoroughbred racing. 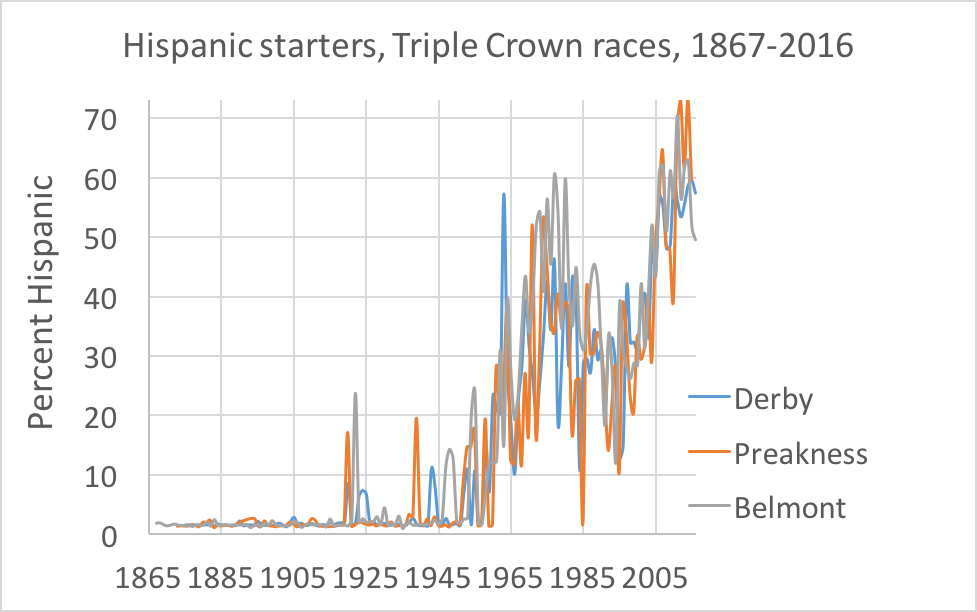 Source. Results charts for all Triple Crown races, run through software that converts last names into a probability that each jockey is Hispanic.

It’s not easy to explain these trends. The simplest explanation is that the rise of Hispanic jockeys reflects the rising share of Hispanics in the general U.S. population. That’s true, to a degree, but the trends aren’t very similar. In the U.S., the Hispanic share of the population rose steadily from 3.5 percent in 1960 to 17.3 percent in 2014. But among jockeys, the Hispanic share rose all the way to 50 percent by 2016, and the growth was not steady, with shrinkage in the 1980s and stagnation in the 1990s.

It’s tempting to attribute the ups and down to U.S. immigration policy. But the ‘Latin Invasion’ was well underway before the 1965 Immigration and Nationalization Act lifted immigration quotas — and there had never been quotas on immigrants from Latin America.

Likewise the decline of Hispanic jockeys began before the 1986 Immigration Reform and Control Act made it more difficult to hire unauthorized immigrants. In any case, jockeys are less often undocumented than backstretch workers, and many Hispanic jockeys are not immigrants at all. Milo Valenzuela, for example, was born in Texas, and Puerto Rican jockeys, like Angel Cordero or Jose and Irad Ortiz, are U.S. citizens from birth.

In the U.S. population, over three-fifths of Hispanics are of Mexican origin or descent. But jockeys come from a wide variety of Latin American counties. Panama, which accounts for just 0.3 percent of the U.S. Hispanic population, had produced a disproportionate share of top Hispanic jockeys, including Ycaza, Baeza, and Laffit Pincay.

In fact, Hispanic jockeys look less like a cross-section of the U.S. Hispanic population, and more like what demographers call an ‘immigrant niche’.

A niche begins when pioneering immigrants achieve early success in a profession, as Ycaza and Baeza did in the 1950s and 1960s. The pioneers’ success made Panamanian jockeys more acceptable to trainers and owners, and made the opportunity to become a U.S. jockey visible to young Panamanians.

A jockey school near Panama City, established in 1958 and renamed the Laffit Pincay Academy in 2000, helped to ensure that the Panamanian niche would remain well stocked.

Other Latin American countries, such as Mexico and Venezuela, have jockey academies as well. In Puerto Rico, the state-sponsored Equestrian Vocational School, founded more than 50 years ago, has produced a steady stream of jockeys, including John Velazquez and the Ortiz brothers.

The mainland US, by contrast, didn’t start a jockey school until 2006.

Is it about size?

Since Sports Illustrated’s 1962 article on the ‘Latin Invasion’, almost everyone has attributed some of Hispanic jockeys’ success to their size. There’s something to that, but not as much you might think.

It’s true that Panamanian and Mexican men are about three inches shorter than U.S. men, on average, and Puerto Rican men are about two inches shorter than men from the U.S. mainland. Yet Panama and Puerto Rico are very small — with 2 percent of the U.S. population, combined — and Mexico, though its population is about 40 percent of the size of America’s, has an obesity epidemic that rivals the U.S. It’s hard to argue that Panama, Puerto Rico, or Mexico have more jockey-weight men than the U.S.

In fact, the U.S has no shortage of jockey-weight adults. There are almost 800,000 young American men under 120 pounds — just as many as there were in the early 1970s. If you include women — who can make outstanding jockeys, though they face persistent discrimination — then there are another five million young Americans under 120 pounds.

Since there are only about 1,500 working jockeys in the U.S. and Canada, if weight were the primary consideration there should no problem finding U.S.-born jockeys of any ethnicity at all.

Who wants the work?

As is the case with many jobs that are staffed by Latin American immigrants, the problem is not that there aren’t enough natives to fill the jobs. It’s more likely that few people born in the U.S. want the work, at least not on the terms that some poor immigrants will accept.

Unlike other top athletes, jockeys don’t get college scholarships or long-term contracts. Jockeys work race to race, for fees that range from $28 in small races to $500 in the Kentucky Derby. If they finish near the front, jockeys can get up to ten percent of prize money, but even that doesn’t add up to much except for a tiny elite who win top races.

Add in the risk of catastrophic injury, which is practically guaranteed, and the epidemic of eating disorders that men suffer to maintain jockey weights. Despite the sport’s glamor, it’s not hard to see why an American with other opportunities might shy away.

For youngsters in the poorer parts of Latin America, however, the alternatives are fewer, and the chance to be a top jockey, even if small, can seem attractive. As Venezuelan jockey Eibar Coa said of students in Panama’s Laffit Pincay Academy, jockeying may be “the only shot they have to be someone”.

** Upset is better known as the only horse to beat Man o’ War, a year earlier at Saratoga, with Willie Knapp in the saddle. Unaccountably, Horse Racing Nation credits Knapp as Upset’s jockey in the Preakness, but the Preakness Media Guide credits Rodriguez, as do the results charts in the Keeneland Library.

Paul von Hippel is associate professor at the University of Texas, where he works in the LBJ School of Public Affairs and is affiliated with the Department of Statistics and Data Science. Before coming to Texas, he developed predictive models to reduce financial risk in the banking industry. He enjoys racing, and finance, and squeezing new insights from data.