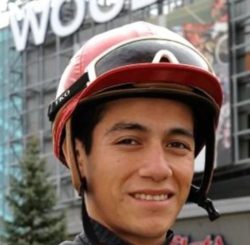 On March 14, 1986, Contreras was born in Mexico City, Mexico. Growing up, Contreras had hundreds of wins in Mexico after he started his jockey career as a teenager. While racing in Mexico, Conthttps://en.wikipedia.org/wiki/Mexico_Cityreras had two runner-ups and one top-five finish in 2006.

Contreras began competing in the United States in 2007 at races held in California and New Mexico. That year, his victories at Golden Gate Fields in 2007 gave Contreras his first American race win and first stakes race win.[4][5] In 2008, Contreras had his first ever graded stakes race win at the 2008 El Camino Real Derby as a Grade III race.[6][7] Throughout his career, Contreras won at least one Grade III race consecutively between 2011 and 2021. Of his thirty four Grade III wins, Contreras had seven of them in 2013 ranging from the Grey Stakes to the Highlander Stakes.[8][9]

In December 2018, Contreras won his 2,000th North American race while competing at Woodbine Racetrack.[42] During his career, Contreras has won more than 2,300 races and accumulated over $97 million in prize winnings.[43] In Equibase rankings for North American jockeys, Contreras was in the top 100 for earnings since 2009 and top 100 for wins since 2010. His best performances during these years were a seventh-place earnings rank in 2011 and a thirteenth place wins rank in 2017.[44] Contreras also received the Sovereign Award for Outstanding Jockey in 2011 and 2012.